The Phantom Ship, Captain Frederick Marryat’s meandering 1839 novel about the Flying Dutchman, touches upon the werewolf theme in an example of the story-within-a-story technique popular in novels of the period. The chapter in question has aged better than the rest of the novel: it was included in Montague Summers’ 1931 Supernatural Omnibus as a self-contained short story under the title “The White Wolf of the Hartz Mounters” and has been reprinted many times since then.

During the chapter, the character of Hermann Krantz tells the story of his father, a Transylvanian serf (note that this was before Bram Stoker had rendered Transylvania indelibly associated with vampires). The account starts off with the elder Krantz murdering both his wife and his master after catching them having an affair:

The evidence of my mother’s shame was positive; he surprised her in the company of her seducer! Carried away by the impetuosity of his feelings, he watched the opportunity of a meeting taking place between them, and murdered both his wife and her seducer. Conscious that, as a serf, not even the provocation which he had received would be allowed as a justification of his conduct, he hastily collected together what money he could lay his hands upon, and, as we were then in the depth of winter, he put his horses to the sleigh, and taking his children with him, he set off in the middle of the night, and was far away before the tragical circumstance had transpired.

Krantz and his three children relocate to a remote cabin in the Harz Mountains. In the snowy wilderness he catches sight of a rare white wolf and chases after it. His pursuit takes him to one of the “peculiar spots on those mountains which are supposed… to be inhabited by the evil influences” and he loses sight of the wolf, but encounters a pair of mysterious travellers: a huntsman and his beautiful daughter.

END_OF_DOCUMENT_TOKEN_TO_BE_REPLACED

“Hugues, the Wer-Wolf” was published in 1838 and attributed to Sutherland Menzies; ISFDB mentions a theory that the true author was Elizabeth Stone, and I notice a few documents on Google Books indicating that a woman by that name did indeed use the pseudonym Sutherland Menzies. Whoever wrote it, the story is an early literary treatment of the werewolf theme – one that lacks a bona fide werewolf.

The story takes place during the reign of Henry II and deals with a Norman family residing in the Kentish countryside. Although the family name is Hugues, their Anglo-Saxon neighbours know them as the Wulfrics, believing them to be werewolves – “so thoroughly was accredited the descent of the original lycanthropic stain transmitted from father to son through several generations.” While the story depicts belief in werewolves as merely a superstition, Menzies does offer some colourful descriptions of lycanthropic activity:

The churchyard at Ashford, and the stone cross, from whence diverged the several roads to London, Canterbury, and Ashford, situated midway between the two latter places, served, so tradition avouched, as nocturnal theatres for the unhallowed deeds of the Wulfrics, who thither prowled by moonlight, it was said, to batten on the freshly-buried dead, or drain the blood of any living wight who might be rash enough to venture among those solitary spots.

END_OF_DOCUMENT_TOKEN_TO_BE_REPLACED 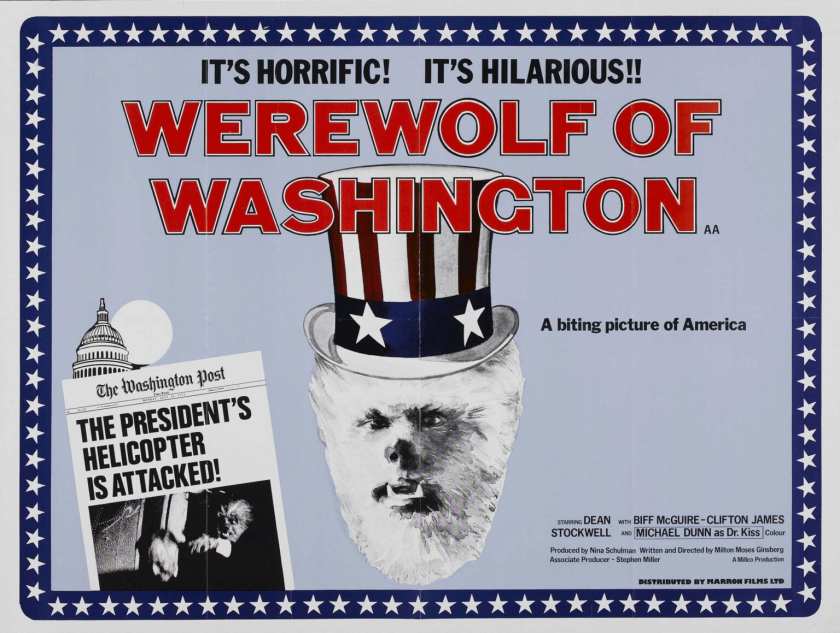 White House Press Secretary Jack Whittier gets bitten by a werewolf during an assignment in Hungary. After he returns to the halls of American power, he finds that the full moon has a strange and dismaying effect on him – which, as it happens, turns out to disrupt things for his boss, as well.

The Werewolf of Washington is a comedy, that much goes without saying, although it’s a long way from the cartoonishly broad humour typical of monster comedies since Abbott & Costello Meet Frankenstein. Instead, it turns out to be an oddball film that mixes dry political satire, distinctly understated genre parody and the occasional bout of out-and-out weirdness.

The sequence in which Whittier gets bitten by the werewolf is essentially a remake of Lon Chaney Jr’s first lycanthopic encounter in The Wolf Man, so much so that the protagonist’s jaunt between countries feels like an analogy for a switch between genres. Whittier heads from political drama to Universal horror, taking something of the latter back with him on his return trip. The overall aesthetic, meanwhile, is very much the product of 1970s New Hollywood: erratic visual storytelling, hazy cinematography, and a steadfast refusal to pick a tone and stick with it.

END_OF_DOCUMENT_TOKEN_TO_BE_REPLACED

A woman dies giving birth in the nineteenth-century French countryside on Christmas Eve, and the baby is brought up by wolves. As a result of these unusual circumstances, the boy is a werewolf. Years pass and the feral child is adopted by a travelling carnival, the owner of which dubs him Etoile; but his act becomes harder to sustain as he grows and becomes accustomed to civilisation. The adult Etoile leaves the carnival and finds work at a zoo – after which mysterious and gruesome deaths begin occurring in the vicinity…

Hammer made only one film about lycanthropy – Curse of the Werewolf from 1961 – but anyone curious as to what a second Hammer werewolf film might have looked like could get an idea from watching Legend of the Werewolf. Although made by rival studio Tyburn, some key talent from Hammer was involved: star Peter Cushing, director Freddie Francis and writer Anthony Hinds (alias John Elder) – who, as it happens, wrote and produced Curse of the Werewolf. Even the werewolves seen across the two films have remarkably similar make-up jobs.

Unsurprisingly, Hinds’ plots for the two films also overlap. Each has a prologue steeped in folklore, in this case incorporating superstitions regarding Christmas births (a detail also found in Curse) and the mythical upbringing of Romulus and Remus. Moving from legend to literature, we then have the sight of the young Etoile frolicking about like Mowgli; if nothing else, this is a werewolf film with a refreshingly eclectic range of influences.

END_OF_DOCUMENT_TOKEN_TO_BE_REPLACED

A macho and eccentric millionaire named Tom Newcliffe sees himself as a natural hunter who has made it to the top by preying upon those beneath him. There’s one game in particular, however, that he has not yet managed to bag: a real live werewolf. Determined to pot himself a lycanthrope, Tom goes through the trouble of rigging a vast array of security and surveillance systems around his secluded mansion, thereby ensuring that if a werewolf arrives at his door he will be ready for it.

Gathering together at Tom’s home to take part in this experiment are some colourful guests with questionable pasts. Paul Foote was convicted of eating samples of human flesh as a medical student. Bennington was once a United Nations diplomat, but his career ended in scandal when members of his entourage mysteriously disappeared. Jan is a concert pianist whose career has been followed by unexplained throat-tearings. Davina once hosted a house party in which a man was found killed and partially eaten. Dr. Lundgren, meanwhile, is obsessed with werewolves and has spent years studying the topic. Rounding off the cast is Tom’s wife Caroline. One of these people is a werewolf – but which one?

While The Beast Must Die was adapted from a 1950 short story by James M. Blish entitled “There Shall Be No Darkness”, reference points more likely to pop into viewers’ heads are The Most Dangerous Game and Agatha Christie’s murder mysteries, elements of which appear to have been mixed up with lycanthropy and given a healthy dose of 1970s aesthetic. Above all, The Beast Must Die feels like Amicus trying in their own way to do what their better-known rival Hammer attempted with Dracula A.D. 1972: drag a classic horror monster jiving and grooving into the era of flares and afros.

END_OF_DOCUMENT_TOKEN_TO_BE_REPLACED 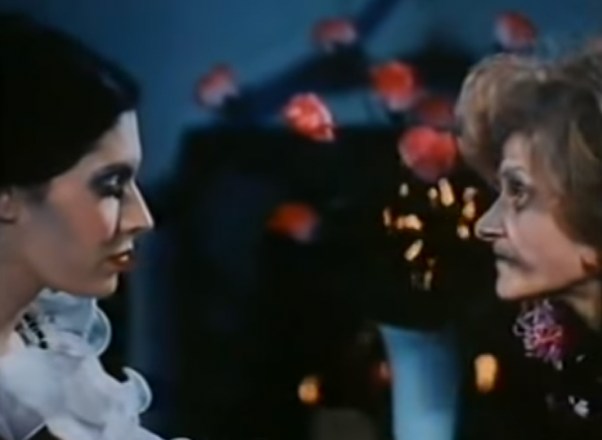 In nineteenth-century America, a family arrives from Europe and settles into a new home. The patriarch calls himself Lawrence Orlovsky, but he has changed the family name to avoid persecution. In fact, he is the son of the notorious werewolf Lawrence Talbot – and not only has he inherited his father’s lycanthropy, his wife Regina is the daughter of Count Dracula.

The presence of Lawrence Talbot in the backstory indicates that Blood is a sequel to Universal’s Wolf Man cycle, but it has no relation to that illustrious series – not officially, anyway – and its roots lie elsewhere. The film was directed by Andy Milligan, the man who previously inflicted The Rats are Coming! The Werewolves are Here! on unsuspecting grindhouses; and his decision to go over the same ground with Blood feels like a murderer returning to the scene of the crime.

Comparing the two films, Blood can be described as a “spiritual successor” if we’re feeling charitable or an “utterly shameless rehash that only the most masochistic filmgoer could possibly find merit in” if we want to be blunt. We get another cursed family, another round of sub-Dickensian domestic strife, and another helping of Milligan’s jaw-droppingly incompetent directorial style.

END_OF_DOCUMENT_TOKEN_TO_BE_REPLACED 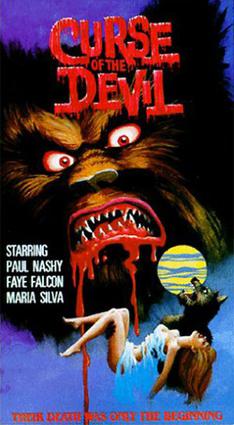 For a while I wrote a weekly column at Killer Horror Critic looking at the history of werewolf films. Sadly, KHC has been forced to downsize and no longer published contributor material, so I’ll be continuing the series at my own blog (see the end of this post for a list of the KHC instalments). Inevitably, my column put me in contact with that redoubtable series from star and screen writer Paul Naschy: the exploits of Waldemar Daninsky, el Hombre Lobo. So, having covered Mark of the Wolf Man, Assignment Terror, Fury of the Wolfman, The Werewolf Versus the Vampire Woman and Dr. Jekyll and the Wolfman, I’ll kick off my newly-homed feature with the 1973 entry in the Daninsky saga…

Curse of the Devil – also known under the variant English title The Black Harvest of Countess Dracula – was originally released in Spain as El Retorno del Walpurgis. This translates literally as “The Return of Walpurgis” and implies, misleadingly, that the film has a particular connection to The Werewolf vs. the Vampire Woman, the original title of which was La Noche de Walpurgis. In practice it has little narrative relation to that film, although it does have a little bit of thematic overlap via the presence of Elizabeth Bathory.