Well, it’s been a while, but my off-and-on series about Norse mythology in Marvel’s Thor comics is back. Once again, though, I’ve arrived at an issue that really doesn’t have much to do with Norse mythology — even in the Asgardian back-up story. Oh well.

The main story of Journey Into Myhstery #109 is an X-Men crossover entitled “When Magneto Strikes!”, which should tell you all you need to know about how it compares to anything written by Snorri Sturluson.

The story’s opening scene reminds us that Thor is part-and-parcel of the Marvel Universe by having him view an exhibit at the World’s Fair, where a statue in his honour stands alongside similar monuments to various other Marvel heroes (including an amusing long-armed Mr. Fantastic statue).

END_OF_DOCUMENT_TOKEN_TO_BE_REPLACED 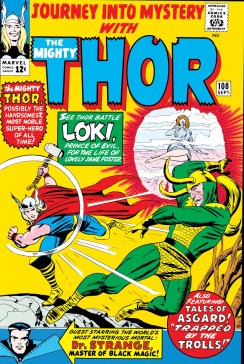 Marvel-Loki’s been the topic of discussion lately because of a series on a streaming service I don’t subscribe to, so now seems an appropriate time to take a trip back to the sixties and see another one of his four-colour battles against Thor. This time, I’ve dug up Journey into Mystery #108…

The main story “At the Mercy of Loki, Prince of Evil!” opens with bystanders panicking as Thor prepares to smash up a chunk of the city with his hammer, but he turns out to have legitimate reasons: the vibrations from his destruction lead to a traffic accident being averted. “I shall reimburse the city for the damage I’ve done by using the emergency fund which the Avengers keep for such a purpose”, he reassures the reader.

END_OF_DOCUMENT_TOKEN_TO_BE_REPLACED 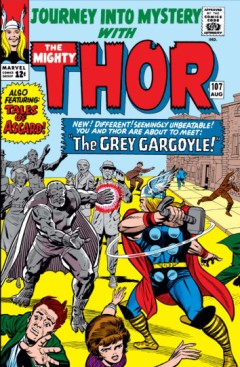 This month’s main story is “When the Grey Gargoyle Strikes!” After some more scenes of Don Blake/Thor pining over Jane, we get a new villain: French chemist Duval, who turned his hand to stone in a laboratory accident (“Ohh! I have carelessly spilled the potion on my hand!”) Not only is this appendage permanently made of rock, but anything it touches – except, conveniently, Duval’s glove – is similarly turned to stone for half an hour. With this trick up his sleeve, Duval is able to both petrify his victims and transform himself into a stony-skinned supervillain, with the ultimate aim of stealing Thor’s hammer and obtaining immortality – this is, I believe, the first time the comic has established that the weapon gives the user longevity.

The Grey Gargoyle is the first street-level villain introduced by the comic since Mr. Hyde back in issue #99; between the two, every opponent faced by Thor has either been an Asgardian antagonist or someone recycled from an earlier issue. And once again, we see the at Lee and Kirby still viewed Thor as, ultimately, a conventional superhero who went up against conventional supervillains: a gargoyle-themed evildoer who turns people to stone could easily have been cast as a denizen of Utgard or an offspring of Loki, but instead he’s given a mad scientist origin.

END_OF_DOCUMENT_TOKEN_TO_BE_REPLACED

“The Thunder God Strikes Back!” concludes the story that began in the previous issue, with Mr. Hyde and the Serpent teaming up against Thor. Exploiting a loophole in the only-a-worthy-person-can-lift-the-hammer rule, the two antagonists use a mechanical crane to grab Mjolnir. Thor is eventually able to get it back and send the villains packing, but due to a misunderstanding he ends up with Jane Foster angry at his mortal alter-ego, Don Blake.

So, another conventional superhero yarn, then. Perhaps the most significant thing about this story is the time it takes raising the profile of Mr. Hyde in Thor’s rogues gallery. The Serpent is dealt with some time before the climax, leaving Hyde to take centre stage as Thor’s most evil enemy: “Of the many foes I have battled – even including the crafty Loki – you are the most completely evil – the most thoroughly wicked of all!!”

Clearly, while Marvel was introducing an ever-larger number of mythological figures into the Thor mythos, these took no precedence over the comic’s superheroic aspects: hence, the frankly generic villain Mr. Hyde being bigged up at the expense of Loki.

END_OF_DOCUMENT_TOKEN_TO_BE_REPLACED

The issue opens with a story about Thor in his more conventionally superheroic incarnation. “The Cobrta and Mr. Hyde!” open with the god of thunder hanging out alongside his fellow Avengers (who are bored because there’s nothing to do) before setting off on his own.

He runs into his previously-established, non-mythological foes the Cobra and Mr. Hyde who have been tailing him with the aid of Hyde’s latest invention: a “time reversal ray” that projects images of the target’s history. Using it, they find that Thor entered the office of Dr. Blake – but they don’t see enough to realise that the two are the same person.

END_OF_DOCUMENT_TOKEN_TO_BE_REPLACED 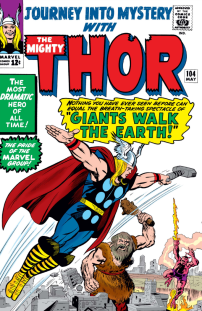 There are a couple of things to note about this issue. First off,  Thor’s name now dominates the cover: although Journey Into Mystery wouldn’t be officially retitled The Mighty Thor until later, the change is clearly being prepared for. Secondly, there’s been a bit of a development in how the comic engages with mythology.

At this point the “Tales of Asgard” stories have introduced a number of Norse mythological characters into the Marvel canon, but so far none of them had turned up in the main features. For all intents and purposes Marvel had publishing two separate Thor universes: one in which Thor lives on modern-day Earth and battles various costumed supervillains (with occasional appearances from Loki, Odin and Heimdall and maybe the odd Asgardian extra) and one taking place in a more recognisably mythological setting, featuring the likes of Surtur, Balder, Hela, Sif, Mirmir, the Norns and Ymir.

But that changes, if only in a small way, with Journey Into Mystery #104: for the first time, mythological figures introduced in the back-up feature are folded into Thor’s superheroic adventures.

END_OF_DOCUMENT_TOKEN_TO_BE_REPLACED

While Journey Into Mystery’s back-up stories had introduced more mythological figures to play with, the main stories were, at this point, still using a very limited cast of Asgardians: Thor, Odin and Loki, plus some extras (if you’re feeling generous you could maybe count Heimdall as a significant character, although his main role was simply to fail at preventing Loki’s escape from prison).

That changed with issue #103, which introduces two more Asgardians into the Marvel Universe. Which ones, you might ask? Well… let’s just say you won’t be recognising them from anything Snorri wrote.

END_OF_DOCUMENT_TOKEN_TO_BE_REPLACED 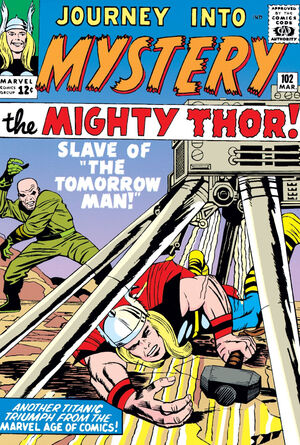 Welcome back to another look at how Marvel Comics processed Norse mythology to create its Thor comics. In this issue, the main story is “Slave of Zarrko, the Tomorrow Man”, which concludes the storyline beginning in the previous instalment.

There’s not much to do with mythology here, although Loki gets a small part in which he refers to Thor as “the stepbrother whom I despise”. I believe that this is the first time the comics have acknowledged Loki’s complex family background: in mythology he’s  the son of the giant Farbauti (his mother is named either Laufey or Nal, depending on the text) but Marvel made him and Thor brothers. The main plot is not concerned with genealogy, however, but with the newly-enslaved Thor being taken in to the twenty-third century by the evil genius Zarrko, who forces him to sow discord by smashing the city’s central control mechanism.

END_OF_DOCUMENT_TOKEN_TO_BE_REPLACED

Journey Into Mystery issue 101 starts off with Thor in a bad mood, stomping through town as bystanders look on in awe (“Did you see that? His foot clipped a piece out of that lamppost as he passed by!”). After he expresses a complete lack of interest in the “puny, petty lives” of mortals, he smashes the front off some guy’s truck and cold-shoulders his fellow Avengers when they try to intervene.

The source of his ire? He’s still smarting about the end of the previous issue, when Odin doubled-down on forbidding his relationship with Jane Foster. Meanwhile, Odin and Loki watch from Asgard. “You have ordered him to forget her.. but still he broods! Is this not rank disobedience?” says the trickster. “Yes, Loki”, replies Odin. “It is! And by thunder, it shall be punished!” And so Odin halves Thor’s powers until he stops troubling himself with thoughts of Jane.

END_OF_DOCUMENT_TOKEN_TO_BE_REPLACED 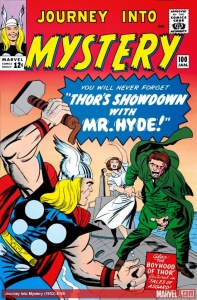 Time for another jaunt back into Norse mythology, as reimagined by 1960s Marvel comics…

Journey Into Mystery #100 opens with “The Master Plan of Mr. Hyde!” which concludes the storyline from last month. At the start of the tale Thor is a wanted man thanks to Mr. Hyde impersonating him while robbing a bank (how Hyde pulled off such a convincing transformation is never explained: was he wearing a latex mask and fake muscles, or does he have an additional shapeshifting form?). Trying to forget his troubles, Thor returns to his mortal guise as Don Blake and enjoys dinner with Jane Foster – until Mr. Hyde kidnaps the pair of them.