You won’t find a writer who lacks their fair share of bad habits, and Lord knows I’ve got mine. One is my tendency to hit on an idea for a non-fiction book (generally related to fantasy, horror and science fiction) and start work on it, even when I’ve already got a number of similar projects on the boil.

Thoughts & Fears: Essays on Horror and Culture
The idea here was to gather together my blog posts about horror media, with some original writing on the side. The complicating factor? That original writing required me to delve into some very deep rabbit holes. Right now I’m working on an essay about the early horror fiction of Whitley Strieber, in relation to his claims to have been abducted by aliens…

END_OF_DOCUMENT_TOKEN_TO_BE_REPLACED 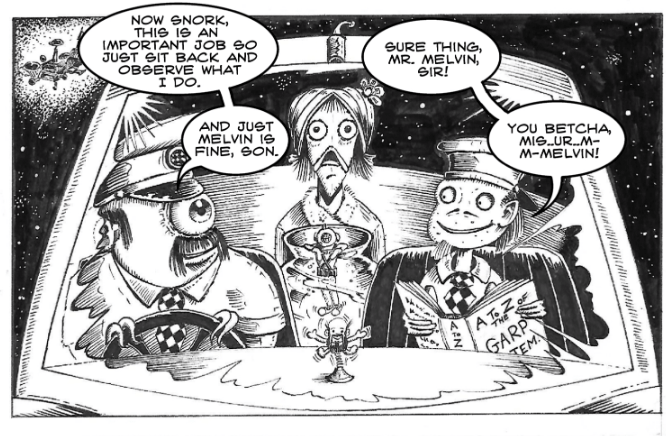 Last week I looked at the first two issues of the retro-flavoured British indie comic Sentinel, graciously provided in PDF by the creative team. Since then I’ve had a look at the next two issues, which feature two more self-contained stories scripted by writer Alan Holloway.

Paul Spence draws issue 3’s story “A Fare to Remember”, which is a comedic tale even sillier than the first issue (which, as a reminder, starred a Han Solo-like character who fired his friend’s detachable testicles from a slingshot). The plot deals with the bitter rivalry between two alien taxi companies, a feud that grows worse still once organised crime gets involved.

END_OF_DOCUMENT_TOKEN_TO_BE_REPLACED

My invisible Man retrospective at Killer Horror Critic has reached the last stop before Abbott & Costello: The Invisible Man’s Revenge…

By now, anyone who keeps up with SF/F disputes online will have heard more than enough about the controversy over violent political rhetoric being posted at Baen’s Bar (the currently-offline forum of publisher Baen Books). But there’s one thing about the whole scuffle that’s been sticking out for me: just how utterly inept the case for the defence has shown itself to be. There’s a considerable amount to say here about how Internet arguments tend to devolve into scapegoating, so I’ve decided to take a closer look.

First, a bit of background. When it was active, the Baen forum was viewable to registered members only, so any discussion there went on behind closed doors unless a member decided to bring it to wider attention. in January this year, the prominent science fiction blog File 770 reported on a particularly incendiary message from the forum, while a Twitter user screencapped a number of similar posts (see here, here, here and here).

As you can imagine, this led to a degree of concern about the forum’s contents and it was only a matter of time until somebody decided to investigate the board and write an article about it. Author Jason Sanford was the person who happened to step up to the task, publishing an article on 15 February about violent rhetoric at Baen’s Bar; and, naturally, it was Jason Sanford who was attacked with volley after volley of ad hominem arguments.

One of the most recent manifestations of this was an attempt to smear Sanford via his fiction, something I wrote about here, here and here. This was merely the latest in a long line of attacks on his person, however.

END_OF_DOCUMENT_TOKEN_TO_BE_REPLACED

I’m proud to announce that the second issue of Midnight Widows is now available! I teamed up with artist Marcela Hauptvogelova, colourist Jio Butler and letterer Rob Jones to create it, and each of us poured our heart into the project. If you’d like to get hold of both issues in PDF form, then place a donation via Ko-Fi or Patreon! If you’d like to know more about the comic, well, it now has its own dedicated page on my site… 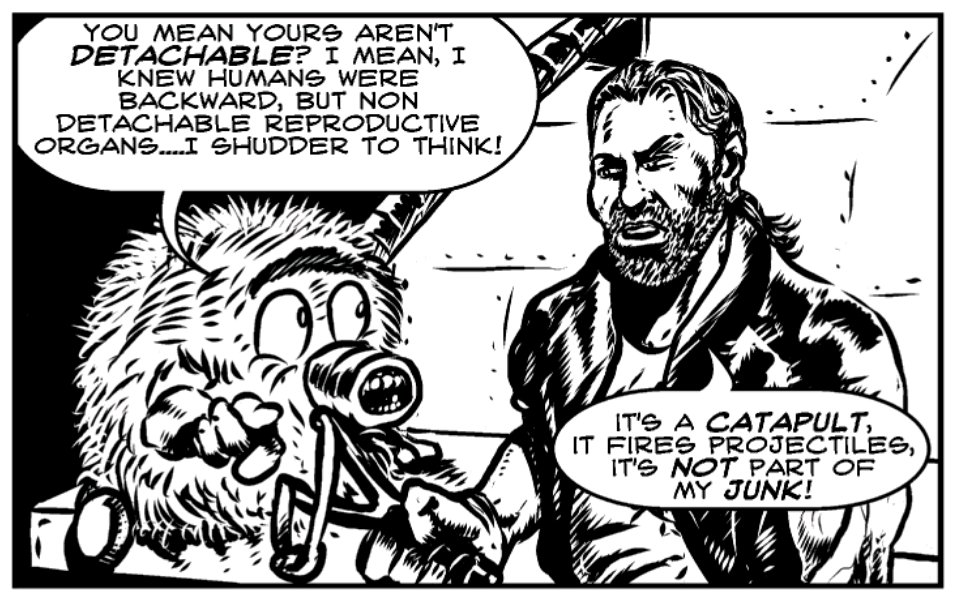 Last month I wrote an article for WWAC about indie creators who are trying to revive the format of classic British comics. One title I mentioned was Sentinel, although for reasons of time and space I wasn’t able to go into much detail.

Since then, the people behind Sentinel have got in touch and provided me with PDF copies of the series. So far I’ve read the first two issues, both of which are scripted by Alan Holloway and drawn by Ed Doyle (although the first also has a co-plotter in Melanie Bagnall). Sentinel has sixty-odd pages per issue, with an average of two panels a page; this format might be a little strange to modern readers, but it was once very common in the UK (and, indeed, still survives in the venerable old war comic Commando).

The story in Sentinel’s first issue is an offbeat space opera romp starring a Han Solo-like character who finds an unlikely Chewbacca: a small (but hard-as-nails) round furry creature with detachable gonads – which, as fortune has it, are just the right size to fit the roguish hero’s slingshot. The two get into various scrapes in the bars and prison cells of alien worlds, evolving from enemies to friends along the way. The story has a charming straightforwardness to it, like a parody comic drawn by a group of giggling schoolchildren.

END_OF_DOCUMENT_TOKEN_TO_BE_REPLACED

Sun is shining through my window, birds are singing, spring is here. My projects are coming along smoothly: my current novel is nearing the 20,000-word mark; my other current novel is gradually taking shape; my series on Amazing Stories has very nearly reached the end of the Hugo Gernsback era; and I’m already got started on reviewing this year’s Splatterpunk Award finalists.

On top of this, my upcoming blog series on Lovecraftian fiction is coming along well. I’ve already written drafts for the posts on 1918, 1919 and 1920, and while i’d like a few more at my disposal before i can commit to a weekly publishing schedule, I’m pretty excited about the project as a whole.

Articles of mine published elsewhere in March:

Article topics for April and beyond:

This month saw an early contender for the most controversial horror film of 2021 courtesy of rapper Little Nas X: the music video for his song “MONTERO (Call Me By Your Name)” depicts him being cast out of Eden and sent to Hell, where he kills Satan and steals the Devil’s crown for himself. There’s little here that hasn’t been done by countless metal bands, with the significant exception that the video is overtly gay — the star even gives Satan a lap-dance prior to snapping his neck. Tying in with the release are Little Nas X’s “Satan Shoes”, actually modified Nikes that reportedly contain small quantities of human blood and are limited to 666 pairs. Between them, the video and footwear sparked a backlash from various conservative commentators.

A less amusing controversy centred on drector Richard Stanley, whose films include the 2019 release The Colour Out of Space. Stanley was publicly accused this month of domestic violence, assault and battery by his former partner Scarlett Amaris. Spectrevision, the production company behind The Colour Out of Space, responded by cutting ties with him, while Arrow Video cancelled plans to release Blu-Rays of his earlier films Dust Devil and Hardware.

END_OF_DOCUMENT_TOKEN_TO_BE_REPLACED

I recently came across a rather peculiar blog post that I’d like to discuss. It’s by author Lela E. Buis and it’s called “Are Women Being Erased from SFF?”

From the first paragraph, the writer makes it clear that she’s concerned about cis women being sidelined in favour of transgender people:

Since the change in administration in the US this year, I’m noticing what looks to be strong moves toward erasure of women as a separate sex and/or gender. For example, in the first 50 days of the Biden administration, the president signed an executive order removing any distinction between women and trans-women in sports, opening the doors for anyone who identifies as a woman, regardless of phenotype or testosterone level. The Equal Rights Amendment is back for ratification. And the Biden administration broadened International Women’s Day in the US this month to include LGBTQ and disabled persons. Move over gals. Presumably, these people have their finger on the larger trends.