Well, it’s been a while, but my off-and-on series about Norse mythology in Marvel’s Thor comics is back. Once again, though, I’ve arrived at an issue that really doesn’t have much to do with Norse mythology — even in the Asgardian back-up story. Oh well.

The main story of Journey Into Myhstery #109 is an X-Men crossover entitled “When Magneto Strikes!”, which should tell you all you need to know about how it compares to anything written by Snorri Sturluson. 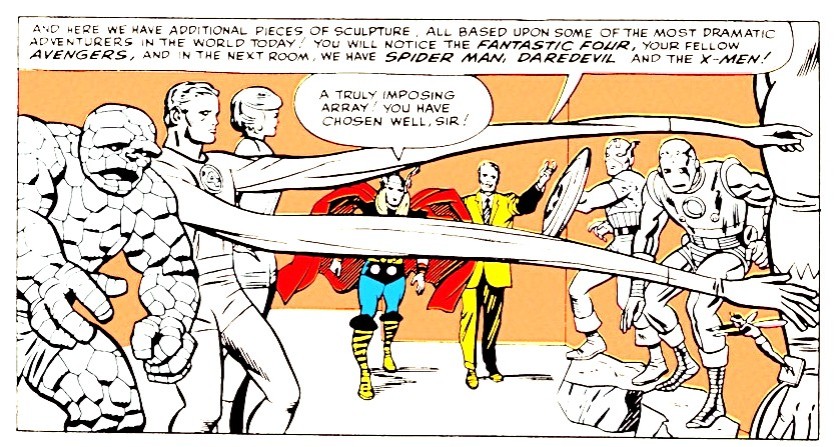 The story’s opening scene reminds us that Thor is part-and-parcel of the Marvel Universe by having him view an exhibit at the World’s Fair, where a statue in his honour stands alongside similar monuments to various other Marvel heroes (including an amusing long-armed Mr. Fantastic statue).

By extension, of course, he shares his world not only with heroes but also with villains.  Magneto and his Brotherhood of Evil Mutants happen to be trailing the X-Men in the vicinity, activating a magnetic device that causes mayhem.

This plan backfires when the magnetism also attracts Thor’s hammer, leading our hero to Magneto’s lair (a submarine with a tree stuck on top to look like driftwood).

Magneto tries to tempt Thor with a portrait of Shakespeare and other treasures that he happened to have on his submarine, but the God of Thunder is too noble to give in. A fight breaks out, with Magneto propelling various bits of metal at Thor.

Meanwhile, Magneto’s minions are tangling with the X-Men, none of whom are given clear cameos (we see Cyclops’ energy blast, Angel’s shadow and Beast’s hairy hands). Thor manages to escape the exploding submarine just as the mutants start pursuing Magneto himself. Cue Dr. Blake hooking up with the ever-patient Jane Foster for the story’s romantic conclusion.

Next, we get the issue’s pseudo-mythological portion: “Banished from Asgard!” Here, a teenage Thor is sent packing by his father, ostensibly for fighting a duel against orders.

We then meet a new character: Arkin the Weak, who is identified as Loki’s cousin. This character is an original Marvel creation; his closest mythological counterparts would be Loki’s brothers Byleist and Helblindi (neither of whom have surviving stories attached to them). Arkin’s main purpose appears to serve as a Loki-like villain in a story set before Loki became a full-fledged supervillain.

Hearing news of Thor’s banishment, Arkin heads off to the object of his unrequited love  — “Knorda, normal-sized queen of the mountain giants”  — hoping that his treason shall finally win her heart.

Knorda is, like Arkin, an original creation. Norse mythology mentions a number of female Jotun/giants, although I do not believe that any are described as queens. I suspect that her name is simply a play on “Nordic”.

I’ve commented before about how the Marvel comics have depicted two different types of giant: Frost Giants and Storm Giants. With Mountain Giants we apparently get a third variety, although it’s not readily obvious what distinguishes them from Storm Giants. The term “Mountain Giant” is used in some translations of the Prose Edda to describe Jotuns, which is presumably where Stan Lee got it from.

The giants try to ambush the lone Thor… only to learn that the whole thing was a ruse. Thor wasn’t really exiled after all; he was simply being used as bait for a trap, and the other Asgardians arrive in time to trap Knorda, Arkin and the Mountain Giants in a  chasm. “His love for Knorda caused him to betray his own land”, says Thor of Arkin. “And now, in a sense he has achieved his desire… he shall be with the one he loves forever… in captivity!”