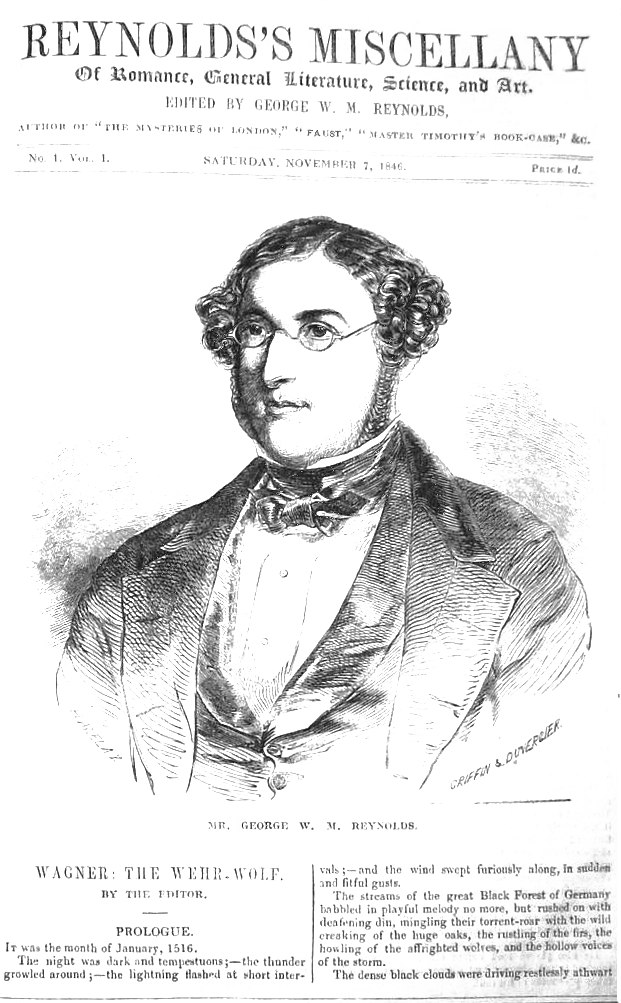 Chapter 36 sees Fernand Wagner finally put on trial for murder — a murder which, ironically, this man-eating werewolf didn’t actually commit. The trial is an awkward one. He is asked what relation he had to the victim; Agnes; but the truth — that she was his granddaughter, but he had supernaturally rejuvenated himself so as to appear roughly the same age — is hardly something he can admit to in court. his case looks still more suspicious when it turns out that he owns a portrait of Faust; given the story’s period setting, Faust’s antics are still within living memory. (Incidentally, Faust is referred to as the Count of Aurana: is this Reynolds’ own addition to the legend?)

Then comes the resolution to one of the novel’s longstanding mysteries. The portrait that Wagner kept covered with a black cloth is brought into the court,and “the usher who had removed the covering recoiled with a cry of horror, as his eyes obtained a glimpse of the picture which was now revealed to view.” The result is delicious:

For, oh! the subject of that picture was indeed awful to contemplate! It had no inscription, but it represented, with the most painful and horrifying fidelity, the writhings and agonizing throes of the human being during the progress of transformation into the lupine monster. The countenance of the unhappy man had already elongated into one of savage and brute-like shape; and so admirably had art counterfeited nature, that the rich garments seemed changed into a rough, shaggy, and wiry skin! The effect produced by that picture was indeed of thrilling and appalling interest!

“A Wehr-Wolf!” had exclaimed one of the assistant judges: and while the voices of several of the male spectators in the body of the court echoed the words mechanically, the ladies gave vent to screams, as they rushed toward the doors of the tribunal. In a few moments that part of the court was entirely cleared.

Quite why Wagner owned a painting of his darkest secret is unclear. The judge is aware of Wagner’s reputation as a werewolf, but dismisses the thought as superstition. So confident is he that, when he passes a sentence of death, he arranges the execution to take place at the precise moment in which Wagner is supposed to become a wolf: the hour of sunset on the last day of the month.

Meanwhile, the actual killer of Agnes — Wagner’s lover Nisida, who mistook the girl for a romantic rival — is stranded on a Mediterranean island, the ship on which she was held captive by bandits having been wrecked. After wondering whether Stephano or any of his bandit crewmen survived, she  heads off to explore. She finds a lot of pretty flowers, which she turns into fashion accessories (“with a diadem of roses on her head, and with wreaths round her bare arms, and her equally bare ankles, she appeared to be the goddess of that island—the genius of that charming clime of fruits, and verdure, and crystal streams, and flowers”) but sees no sign of humanity. Isolation within this unspoilt wilderness turns out to have a beneficial effect on this once-homicidal character:

Conceive that same Nisida who planned dark plots against Flora Francatelli, now tripping along the banks of the sunlit stream, bedecked with flowers and playing with the swans. Imagine that same being, who dealt death to Agnes, now seated beneath the shade of myrtles and embowering vines, distributing bread or pomegranate seeds to the birds that hopped cheerfully around her. Picture to yourself that woman of majestic beauty, whom you have seen clad in black velvet and wearing a dark thick veil, now weaving for herself garments of flowers, and wandering in the lightest possible attire by the seashore, or by the rippling stream, or amidst the mazes of the fruit-laden groves.

The next chapter takes us back to Wagner in time for his execution. Things go drastically wrong when he’s released from his cell and turns out to have already transformed into a wolf:

Yells and cries of despair reverberated through the long corridor: and those sounds were for an instant broken by that of the falling of a heavy body. ’Twas the chief judge, hurled down and dashed violently against the rough uneven masonry, by the mad careering of the Wehr-Wolf as the monster burst from his cell. On, on he sped, with the velocity of lightning, along the corridor, giving vent to howls of the most horrifying description. Fainting with terror, the assistant judges, the procurator fiscal, and the sbirri were for a few moments so overcome by the appalling scene they had just witnessed, that they thought not of raising the chief judge, who lay motionless on the pavement. But at length some of the police-officers so far recovered themselves as to be able to devote attention to that high functionary—it was, however, too late—his skull was fractured by the violence with which he had been dashed against the rough wall, and his brains were scattered on the pavement. Those who now bent over his disfigured corpse exchanged looks of unutterable horror.

“No pen can describe the awful scene of confusion and death which now took place” says Reynolds, although this doesn’t stop him from trying. The highlight occurs when Wagner reaches the countryside and causes a young woman to die of fright mid-spoon:

On the verge of a grove, with its full budding branches all impatient for the spring, a lover and his mistress were murmuring fond language to each other. In the soft twilight blushed the maiden, less in bashfulness than in her own soul’s emotion, her countenance displaying all the magic beauty not only of feature but of feeling; and she raised her large blue eyes in the dewy light of a sweet enthusiasm to the skies, as the handsome youth by her side pressed her fair hand and said, “We must now part until to-morrow, darling of my soul! How calmly has this day, with all its life and brightness, passed away into the vast tomb of eternity. It is gone without a single hour’s unhappiness for us—gone without leaving a regret on our minds—gone, too, without clouds in the heavens or mists upon the earth, most beautiful even at the moment of its parting! Tomorrow, beloved one, will unite us again in your parents’ cot, and renewed happiness——”

The youth stopped, and the maiden clung to him in speechless terror: for an ominous sound, as of a rushing animal and then a terrific howl, burst upon their ears! No time had they for flight, not a moment even to collect their scattered thoughts. The infuriate wolf came bounding over the greensward, the youth uttered a wild and fearful cry, a scream of agony burst from the lips of the maiden as she was dashed from her lover’s arms, and in another moment the monster had swept by.

But what misery, what desolation had his passage wrought! Though unhurt by his glistening fangs—though unwounded by his sharp claws, yet the maiden—an instant before so enchanting in her beauty, so happy in her love—lay stretched on the cold turf, the cords of life snapped suddenly by that transition from perfect bliss to the most appalling terror! And still the wolf rushed madly, wildly on.

Finally, Wagner returns to human form and sets about looking for Nisida. Having been shown a vision of her whereabouts by Satan, he asks around until he gets an idea of where Stephano’s pirate ship was headed. Then, he sets sail…