In the previous instalment of Wagner, the Wehr-Wolf we left the title character held cpativei n a dungeon. So, with its werewolf confined, how can this penny dreadful keep up the blood and thunder? Answer: with sadistic nuns!

Chapter fourteen opens with Nisida visiting the Convent of Carmelite Nuns, which is something of a centrepoint for rumour:

Rumor was often busy with the affairs of the Carmelite Convent; and the grandams and gossips of Florence would huddle together around their domestic hearths, on the cold winter’s evenings, and venture mysterious hints and whispers of strange deeds committed within the walls of that sacred institution; how from time to time some young and beautiful nun had suddenly disappeared, to the surprise and alarm of her companions; how piercing shrieks had been heard to issue from the interior of the building, by those who passed near it at night,—and how the inmates themselves were often aroused from their slumbers by strange noises resembling the rattling of chains, the working of ponderous machinery, and the revolution of huge wheels.

Such food for scandal as those mysterious whispers supplied, was not likely to pass without exaggeration; and that love of the marvelous which inspired the aforesaid gossips, led to the embellishment of the rumors just glanced at—so that one declared with a solemn shake of the head, how spirits were seen to glide around the convent walls at night—and another averred that a nun, with whom she was acquainted, had assured her that strange and unearthly forms were often encountered by those inmates of the establishment who were hardy enough to venture into the chapel, or to traverse the long corridors or gloomy cloisters after dusk.

Inside, the abess hears from a nun about the murder of Agnes (“a young female, whom the worldly-minded outside these sacred walls denominate beautiful”) and the subsequent arrest of Fernand Wagner (“whom the worldly-minded style a young man wondrously handsome”). Nisida then disguises herself as a German cavalier and visits Wagner in his dungeon cell, making him swear that he did not kill Agnes. She offers to break him out, but he declines on the grounds that he would rather stay in captivity to prove his innocence.

END_OF_DOCUMENT_TOKEN_TO_BE_REPLACED

Another post in my series of Hugo Award reviews is up at WWAC. Having covered the short stories and novelettes, this week I start on Best Novella…

(This is the sixth part in a series; see also parts one, two, three, four and five)

Chapter 12 saw Wagner run away from Nisida to turn into a wolf; chapter 13 returns to Nisida, who is understandably bewildered by the sudden departure of the man she has found herself passionately attracted to. Reynolds spares few words in describing her emotional state:

Her mind was like the sea put in motion by the wind; and her eyes flashed fire, her lips quivered, her bosom heaved convulsively, her neck arched proudly, as if she were struggling against ideas that forced themselves upon her and painfully wounded her boundless patrician pride. For the thought that rose uppermost amidst all the conjectures which rushed to her imagination, was that Fernand had conceived an invincible dislike toward her.

(This is, incidentally, the second of four passages in the novel containing the phrase “her bosom heaved”, and one of two in which the adverb “convulsively” follows).

While dealing with Wagner’s departure, Nisida catches sight of two men named Antonio and Stephano plotting to rob the forbidden closet containing her brother’s mysterious inheritance — although, being deaf, she is unable to hear the conversation in which they pointedly spell out not only their scheme bu their names.

END_OF_DOCUMENT_TOKEN_TO_BE_REPLACED

Having blogged about the world of right-wing pop-culture warriors off and on for a few years now, one thing that’s fascinated me is the contradiction at the centre of their movement. They like to portray themselves as rebellious bad-boys, melting snowflakes and smashing safe spaces; yet at the same time their movement has a streak of puritanical moralism that’d make Mary Whitehouse say “dude, lighten up.”

I recently a good example of this conflict bubbling to the surface. Brian Niemeier (a sci-fi author so far to the right that even BasedCon founder Rob Kroese called him a “nutcase and an asshole”) ran a blog post arguing that left-wingers are being controlled by demons. The post isn’t particularly remarkable by Niemeier’s standards, being largely a reprint of an article he published in 2017, albeit altered so that it says “woke” instead of the now-antiquated “SJW”. What caught my attention was a post in the comments section by someone called Dweller:

I have seen demons myself.

Okay, with an opener like that we all know we’re in for a treat. Dweller goes on to explain that his demonic encounter involved hearing voices in bed:

END_OF_DOCUMENT_TOKEN_TO_BE_REPLACED

My report on the 2021 Ignyte Awards is now live at WWAC. I hope to begin running reviews of the short fiction finalists soon… 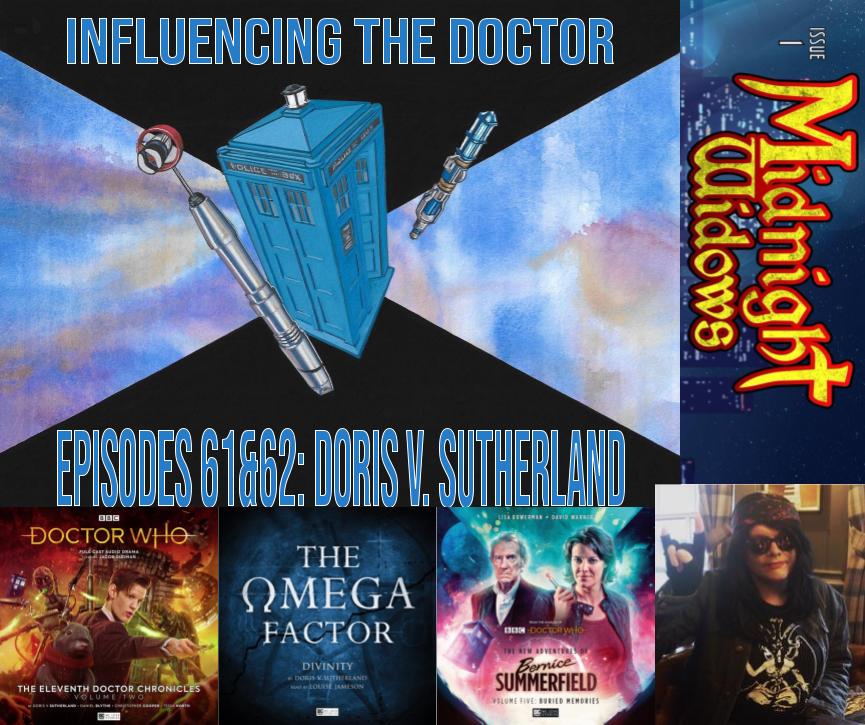 The second half of my chat with Ethan Gibson on Influencing the Doctor is now live! This instalment’s focused mainly on Doctor Who, allowing me to discuss Jon Pertwee, Peter Capaldi, Jo Martin, that guy in the Max Headroom mask, and my own tie-in stories.

My WWAC series reviewing the year’s Hugo Award finalists has reached the final two contenders in the Best Novelette category: Sarah Pinsker’s “Two Truths and a Lie” and Aliette de Bodard’s “The Inaccessibility of Heaven”. Read on…

The Eleventh Doctor Chronicles Volume 2, a Big Finish Doctor Who audio drama boxset that I worked on a bit, is now available to buy! If you haven’t bought the first volume, you can currently get the two as a bundle.

(This is the fifth part in a series; see also parts one, two, three and four)

Reynolds’ Miscellany, where Wagner the Wehr-Wolf was serialised, was sold for one penny an issue. That’s half of the “penny dreadful” label earned, and now — after some stalling — I’ve arrived at the portion of the novel that justifies the second half.

Granted, there’s still a little more stalling to go. At this point it’s clear that Reynolds is not above repeating himself. Consider the narrator’s description of Nisida:

She was attired in deep black; her luxuriant raven hair, no longer depending in shining curls, was gathered up in massy bands at the sides, and a knot behind, whence hung a rich veil that meandered over her body’s splendidly symmetrical length of limb in such a manner as to aid her attire in shaping rather than hiding the contours of that matchless form. The voluptuous development of her bust was shrouded, not concealed, by the stomacher of black velvet which she wore, and which set off in strong relief the dazzling whiteness of her neck.

Compare this with Agnes’ description in the previous chapter of the mysterious woman who haunted her:

The lady was enveloped in a dark, thick veil, the ample folds of which concealed her countenance, and meandered over her whole body’s splendidly symmetrical length of limb in such a manner as to aid her rich attire in shaping, rather than hiding, the contours of that matchless form.

Chapter 11 opens with announcing that months have passed, so that the story has reached 31 January 1521. Love is in the air, with Francisco expressing his love of Flora (despite social strictures against a count marrying a commoner) and Wagner courting Nisida. The latter encounter is broken off abruptly, however, as Wagner realises that the sun is about to set on the last day of the month — and soon he will become a wolf. After one of the purplest descriptions of s sunset ever commuted to prose, the following chapter describes Wagner’s transformation:

But, hark! what is that wild and fearful cry?

In the midst of a wood of evergreens on the banks of the Arno, a man—young, handsome, and splendidly attired—has thrown himself upon the ground, where he writhes like a stricken serpent, in horrible convulsions.

He is the prey of a demoniac excitement: an appalling consternation is on him—madness is in his brain—his mind is on fire.

Lightnings appear to gleam from his eyes, as if his soul were dismayed, and withering within his breast.

“Oh! no—no!” he cries with a piercing shriek, as if wrestling madly, furiously, but vainly against some unseen fiend that holds him in his grasp.

And the wood echoes to that terrible wail; and the startled bird flies fluttering from its bough.

But, lo! what awful change is taking place in the form of that doomed being? His handsome countenance elongates into one of savage and brute-like shape; the rich garments which he wears become a rough, shaggy, and wiry skin; his body loses its human contours, his arms and limbs take another form; and, with a frantic howl of misery, to which the woods give horribly faithful reverberations, and, with a rush like a hurling wind, the wretch starts wildly away, no longer a man, but a monstrous wolf!

At last, Wagner the Wehr-Wolf has its werewolf. Reynolds seems more at home with the ensuing lupine mayhem than with the preceding romance, and shows great glee in describing the wolf’s bloody rampage through a funeral procession:

The coffin-bearers dropped their burden, and the corpse rolled out upon the ground, its decomposing countenance seeming horrible by the glare of the torch-light. The monk who walked nearest the head of the coffin was thrown down by the violence with which the ferocious monster cleared its passage; and the venerable father—on whose brow sat the snow of eighty winters—fell with his head against a monument, and his brains were dashed out.

The mayhem continues. The wolf makes short work of a boy who happened to be in his way (“the child—the blooming, violet-eyed, flaxen-haired boy—the darling of his poor but tender parents, is weltering in his blood!”), causes a herdsman to be gored to death by his own startled ox and knocks a gay maiden to her death in a rapid stream. Then, finally, dawn breaks and Wagner once again becomes “a handsome, young and perfect man” — at least, until the month ends.

I’ve had the pleasure of appearing on Ethan Gibson’s podcast Influencing the Doctor, and the first half of the two-part interview is now yours to hear. Part 1 is given over to non-Doctor Who topics including my career history, Midnight Widows, my Omega Factor novel, David J. Skal, Tod Browning, John Grant and Charlee Jacob, with cameos from Dion Fortune, Don Bluth, Aleister Crowley and Dennis Wheatley.