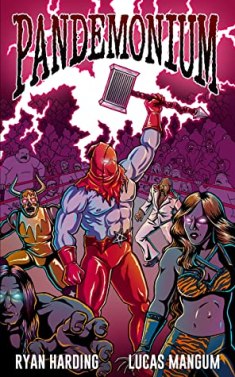 A repurposed Philadelphia warehouse is home to a hardcore wrestling tournament dubbed BPHW (Bloody Pit of Horror Wrestling). Fans gather for the promise of brutality and bloodshed between their favourite costumed combatants, only to find themselves caught up in all-out mayhem as the wrestling goes seriously off-script. In the warehouse, amongst the wrestlers and audience members, is a magician named Lampini; and he seeks to open a gateway to another realm, unleashing demons upon the Earth…

Pandemonium is a novel inspired by two genres. One, of course, is hardcore wrestling. The other is Italian horror films, particularly Lamberto Bava’s Demons duology and their quasi-sequel The Church. Neither genre is exactly noted for sophisticated story structure and true to its sources, Pandemonium throws out the niceties of crafting a narrative in favour of gore-scene after gore-scene. The two authors show a skill for zooming in microscope-fashion on every gruesome detail, so that even a minor death sequence – like the scene in which some incidental characters are killed trying to pass through a door magically sealed by Lampini – are lavished with care and attention:

The door caromed back, catching Quincy again and the axe, essentially reversing the chop. The axe cleaved through Calvin’s head at the temple and the collision bounced him away. The luchador mask landed upright on the ground, effectively unmasking Calvin though still keeping his face inside. His body hit the deck with a grisly cavern staring back blankly.

Quincy watched all this happen in slow motion with the strobe-light effect of the flailing door, smashing more pieces within him, setting off further ruptures like a string of firecrackers. It did not stop for the better part of a minute until flesh and bone ceased any resistance, and the door rattled shut against the frame and came to rest. Disproportionate sections of Quincy and Yelp’s bodies slumped to the door, certain limbs and organs sequestered inside the Event Horizon with their counterparts inside, joined only by a pool of deep red spreading beneath the door.

Like any wrestling tournament worth its salt, Pandemonium strives to cram as many characters as possible into the mayhem. The closest thing to a central protagonist is Ana, who is the most fleshed-out of the characters (her central quirk is the habit of making up life stories for the strangers around her). With no personal interest in attending the BPHW tournament, Ana is cajoled into going by her partner Saul, who also insists on taking along his friend Dallas – despite Ana’s personal dislike of him.

The Ana/Saul/Dallas triumvirate is not the only group of characters attending the event. Also in the audience are Colette (who copes with past bullying with a carefully-cultivated bad-girl image: “I always show dudes Nekromantic on the first date. Ether they get some or run home crying to Mommy. One way or another I’m satisfied”) and attends with her punkish friends Gavin and Hiromitsu. And then we have Katia, who developed a childhood love of wrestling as a means of bonding with her distant father; now all grown up, she provides sexual favours to security staff in the hopes of getting into bed backstage with a wrestler. Katia’s circle of acquaintances (not exactly friends) consists of Beth, Janine and Cindy; when the group receive unwanted attention from dudebros Bo and Curtis, Katia responds with a spray of Mace, leaving the two young men bent on getting even. Rounding off the cast of fans are kids Noah and Kevin, who attend the tournament with theit mother.

Then come the combatants themselves, a set of characters born from the authors’ clear love of both wrestling and trash cinema. One brawler, Woody Aldridge, is described as having been “one of the Bronx Warriors back in the NWA”; while the NWA is a real-life wrestling promotion, The Bronx Warriors is an Italian Mad Max cash-in from 1982. Another wrestler, the Commandant, is based on the Nazisploitation anti-heroine Ilsa, She-Wolf of the SS; she is connected to the Franco Women’s League – a name evoking Jess Franco, who directed the third Ilsa film along with many other questionable cinematic products. Punk rock is also homage by the novel, with the Commandant going up against a female opponent named Sidney Vicious. Acting as MC is Madman Mark Mitchell, a former wrestler turned podcaster with a Joe Bob Briggs-esque redneck persona.

Towering above the rest of the cast is the Crimson Executioner, a wrestler whose true identity is a mystery even to his fellow professionals, and whose appearances on video are accompanied by lashings of gore. Not everybody is taken in by his mystique, with one character considering him no more than “a weak throwback to the Undertaker for a new generation who just wanted the same shit dressed up in a different uniform”. For the majority, however, the Crimson Executioner embodies the hybrid of wrestling and horror central to BPHW.

As with the Demons films that influenced it, the bystanders in Pandemonium begin turning one by one into clawed, fanged, glowing-eyed monsters, and those who remain are forced to fight them off. Costumed wrestlers become the heroes or villains they previously portrayed in scripted scenarios, and even the audience members become combatants in this ultimate division between faces and heels. Since BPHW is hardcore wrestling, they at least have plenty of weapons from kendo sticks to barbed wire at their disposal – but so do the demons:

Colette watched one demoness wrap her hand in barbed wire and repeatedly mash her fist into the head of an unpossessed woman. The strikes drew flecks of blood and reduced the woman’s face to something like raw hamburger, ground up poorly so bone chips still remained as gleaming white bits sprinkled through ruined, red chunks.

The above paragraph is quite typical of the material to be found in Pandemonium, the novel in large part comprising one bout of brutal violence after the other. As with any wrestling tournameent a conflict will conclude with the loser written out of the narrative and the winner proceeding to their next match, allowing the cycle to begin again. The writers do find a way to vary the premise: for example, in some cases the process of demonization is described from the perspective of the victim while in other cases we see it entirely from the outside, as when the already imposing and alluring Crimson Executioner turns into an exaggeration of his own persona. Also enlivening things is the macabre humour that runs through the novel:

One of the fanboys who’d been holding the glittery TOSS HIS HEAD HERE, CRIMSON EXECUTIONER sign managed to squirm free from the storm of people. He sprinted up the entrance ramp. He probably didn’t even know where he was or where he was going. His wobbly strides and the way he frantically glanced around suggested serious disorientation.

The Crimson Executioner waited at the top of the ramp. In his right hand, he held the dripping severed head of another masked guard. […] The Crimson Executioner hurled the head overhand. It collided with the fanboy’s and both skulls exploded like two water balloons filled with blood. Shards of bone clattered against the steel like hail. Blobs of brain and ragged flaps of skin flopped down with wet, heavy sounds. The fanboy’s headless corpse dropped to its knees and then slumped to its side. Blood ran down the ramp in scarlet gullies and soaked his crumpled, torn sign.

At last he got his wish, Colette thought, and felt a little sick.

One scene in Pandemonium has two characters discussing how, even though everyone knows wrestling is staged, it should never looked staged, with the finale to Game of Thrones cited as an example of what happens when the audience can no longer suspend disbelief. This affirmation of the bare basics in terms of consistent storytelling sums up the ethos of the novel: Pandemonium establishes its core concept of hardcore-wrestling-meets-Italian-splatter early on, and never once departs. While nothing that occurs in the story should come as a surprise to anybody who is halfway familiar with both wrestling and the Demons films, Pandemonium’s sheer, bloody-minded commitment to eking every last drop of gore from its premise is hard to fault.