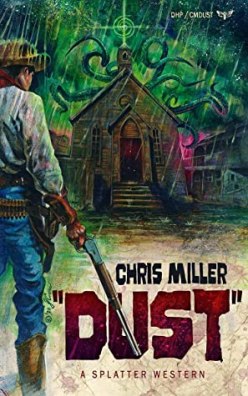 The year is 1879, and James Dee is shooting his way through Texas in search of a man called Dreary and a town called Dust. Elsewhere, the outlaw Dreary himself is on his way to that same town with a band of accomplices in tow. Dust is a strange town with strange things to offer its visitors: Dreary hopes to find a certain relic that he can use to his advantage, while James Dee is bent on stopping him before he gets his way.

Dust is still another entry in the Death’s Head Press Splatterpunk Westerns series, a line of self-contained novels and novellas united by genre (see also Red Station, The Night Silver River Run Red and The Magpie Coffin). In this case we have a novel that starts out as a straight western, complete with the stock opening of a lone gunman walking into a saloon looking for answers; although, admittedly, the ensuing action is rather more gruesome than might be seen in a typical Saturday matinee oater:

The watch belonged to the dead man with the giant hole in his head. You could see through it—the man’s head, not his watch—if you didn’t mind the stringy goo which slopped viscously through the hole, or the meaty gray pulp that slid slowly down the wall among the rivers of blood like macabre slugs.

The novel has more to offer besides blood upon the sawdust at the Last Chance Saloon, however. Protagonist James Dee turns out to be a man from the future, who has travelled not only through time but across parallel universes in pursuit of an otherworldly species that endangered his own time and place. He comes equipped with weapons from more than a hundred years in the future along with telekinetic abilities that he believes may be God-given.

A hero like this needs appropriately larger-than-life antagonists, and so the novel pits James Dee against the eldritch forces of Lovecraftian pseudo-deities: “The elder gods are killers. Destroyers. All throughout the universe, throughout all universes, these things are dormant. Sleeping. Waiting to be awakened. For willing servants to usher them out of their banishment. That’s one thing I’ll give the real God, he put them away.”

The town of Dust is home to a relic connected to one such elder god, N’yea’thuul, and the central villain Dreary hopes to get his hands on this artefact for his own nefarious purposes. The fight takes both James and Dreary to the fabled town, the residents of which are having their bodies taken over by N’yea’thuul’s minions:

And now there was this… thing. He wasn’t sure what you’d call it. Some cross between a man and a crab, or maybe a spider. But that wasn’t quite right. It wasn’t a cross, per se, but rather seemed as though the crab or spider were inside of a man’s corpse and it was using him for sustenance. Like a parasite.

The thing had a giant, gaping wound in its chest with razor teeth which drooled and dripped, and a large, red eye burst forth to the center of its forehead. The spider legs which had torn loose from the flesh up and down other side of the corpse’s spine kept the body afloat above the ground as it skittered away down the street.

Just before it tuned out of sight, he saw yet another abomination join the first. This one was much like the other, but it seemed to have utilized the corpse in a much different way. The tentacles or legs came from the raw stump of the neck and right out the ass of this man, whose arms and legs dangled like limp genitalia beneath.

Between the protagonist’s deadly shooting and the body horror inherent in the antagonists, the book has more than enough to justify the “splatter” aspect of its series title. But a novel needs more than sundered innards to hold interest, what truly allows the novel to sustain interest is its supporting cast.

James Dee is accompanied to Dust by Denarius King, an African-American who is introduced running for his life from a pair of racist would-be murderers, who are themselves gruesomely dispatched by James. As well as helping James, Denarius has the goal of saving his wife and son, who have ended up in Dust by the time the two protagonists have arrived. The novel’s depiction of the racism that Denarius has experienced throughout his life ranges from casual ignorance, past outright malice and into attempted murder – an all-too-credible evil that offsets the story’s more fanciful threats. Denarius is also a balancing influence on James Dee, who like many a Western antihero has a heart hardened by a life of violence (“A good person wouldn’t shoot a man in cold blood to get the information he needed to go after the horrors of the universe”).

Another detail that helps bring the story to life is the fact that each character brings with them a different perspective on the eldritch creatures of Dust. The first time one of these beings is described full-on, the observer is Denarius’ wife – a bystander who reacts with utter horror. Denarius himself has some preparation from James, who views the elder gods as monsters to be destroyed. The villain Dreary, on the other hand, sees them as an opportunity to be exploited. Then we have Dreary’s henchman, Bonham, who has not met the elder gods before but is nonetheless able to take them in his stride: after all, he once killed and ate a bigfoot.

Once the action reaches Dust, the novel becomes a swirling mass of disparate genre elements: the trappings of the Western mingle with body horror, hideous monstrosities, bawdy humour (as when a villain’s penis size is mocked: “God, it seemed, had exercised brevity in His phallic allocation the day He had breathed life into the monster before her now”) and social commentary (the town is inhabited by racist lawmen as well as hideous elder gods).

These different aspects never quite come together – the gross-out scenes prevent the atmosphere of Lovecraftian cosmic horror to take hold, for example – but things move at so fast a pace that this scarcely matters. Dust is a novel concerned less with coherence or depth and more with keeping all of its balls of pulp in the air.