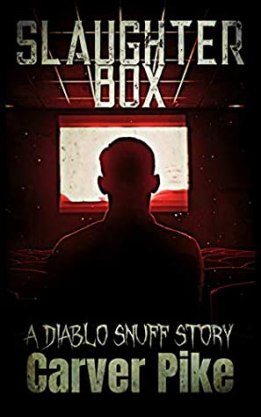 Slaughter Box one of a series of novels by Carver Pike involving an enigmatic group called Diablo Snuff. The secret society in question is part snuff film production company, and part Illuminati-like conspiracy that wields substantial (perhaps even supernatural) power. Its exact nature is hard to pin down, but one thing is clear: anybody who falls into the clutches of Diablo Snuff will forced to endure a hallucinatory hell. Over the course of the series a number of characters have been subjected to ordeals by the mysterious group, and the few who survive are left with a desire for revenge.

Amongst these is a man nicknamed Kong, who was introduced earlier in the series but now serves as the central character for the first time. Slaughter Box begins by delving into his backstory, from his childhood (when his habit of beating his chest during tantrums earned him his nickname) and into his adolescent years when the weirdness began. In an early sequence, a twelve-year-old Kong takes part in a séance arranged by his friend Josephine at a pit which, according to urban legend, leads to hell. They fail to summon any demons, however: the pit simply leads to the local sewer works, as the friends find out when Josephine’s younger brother Joey has a fatal fall. But something supernatural appears to be afoot after all, as at the time of Joey’s death, Kong glimpses the figure of a mysterious silhouetted man.

At thirteen he sees the figure again, and once more the sighting accompanies a death in his circle of friends. Even when Kong is old enough to join the army, the silhouetted man still follows him. In Afghanistan, after surviving an explosion that kills his buddies, Kong sees the sinister man once more – this time with other eldritch sights:

There he was. Standing over me was the tall man from my childhood. It was too dark to see his features, but I was sure I could make out the black nothingness where his eyes should have been. His long, stringy hair hung down like a chandelier only a few feet over me. I glanced right and saw other beings out there beyond my field of vision. They were demons. I knew it.

Kong survives the ordeal, but walks away with both physical and mental scars. Back in America he tries to lose himself in drink and sex (Kong’s sexual development having been a thread established early on in the novel, via his childhood crushes and adolescent discovery of Playboy). All the while, however, the silhouetted figure still haunts him.

Slaughter Box is divided into two uneven portions. The above narrative occupies the first quarter or so of the book; the remainder is more rightly-focused and takes place after Kong’s encounter with Diablo Snuff, as detailed in The Grindhouse: Diablo Snuff 2. “What happened to me in that warehouse changed me forever”, says Kong. “It was the wake-up call I’d needed. God wanted me to be a soldier again, only this time I had an enemy that was everywhere and had no face.” After making it his life’s mission to come for Diablo Snuff, Kong learns too late that Diablo Snuff has decided to come back for him.

He receives an invitation to a screening at a newly-refurbished cinema and, despite believing himself too corrupted by his experiences for a normal romance, even chooses a date of sorts in Sammy (another figure from his childhood, being the younger sister of his best friend). The cinema turns out to have its uncanny qualities: it is much larger on the inside than it had been before its refurbishment; there are seemingly no employees; the décor inexplicably includes a Grecian statue with an enormous erection; and a large number of security cameras adorn the ceiling of the screening-room. Despite these oddities, Kong’s interactions with Sammy grow still more erotic.

Then, the curtains part to reveal a screen. First come the trailers, which turn out to have eerie similarities to Kong’s personal experiences. A Stranger Things-esque film about three children trying to summon a demon from a pit on Halloween, echoing the death of Joey all those years ago, is followed by more trailers containing images from Kong’s childhood as though the unseen projectionist is playing a mind game with him.

The trailers are followed by the main feature, at which point the cinema turns out to have a gimmick. The chairs begin moving to simulate a car journey occurring onscreen, while various scents appropriate scents are pumped into the room: footage of a farm is accompanied by both the pleasant smell of grass and by the stench of manure. Clouds of dust are likewise thrown into the audience members’ faces as an announcer declares that they have reached “the home of Dr. Delusional’s Project Hell.”

The William Castle-gone-haywire gimmicks grow still more intense. The audience is attacked by a swarm of bees – or, at least, believe that this is happening; the announcer insists that it is all an illusion. Then come spiders, and these turn out to be not only real, but deadly:

His wife screamed. One spider had latched on to her left breast and sunk its fangs into her. The other was down on her face. As they bit down, smoke sizzled from the spots where the fangs met skin.

“Help me!” she cried, and each time she repeated it, her voice grew weaker. She was on her knees next to her husband when more spiders crawled over them. Around them, anyone else who’d been standing was already on the ground. Smoke rose from their bodies. The spiders were liquefying their victims.

This is the first killing, but not the last. The cinema begins deploying more traps and, as the audience members are picked off one by one. Kong realises too late that the cinema is under the control of Diablo Snuff.

The point at which the cinema’s traps come into play – around halfway through the novel – marks another change of tone. The uncanny unease of the film-trailer sequence gives way to a more straightforward, Saw-style story of ingenious deathtraps and hapless victims. This compounds a general sense of the novel being somewhat thrown-together, as the reader will have already come across a gap in the narrative: Kong’s first encounter with Diablo Snuff, the defining point in his life, is skimmed over rather than shown.

Of course, Carver Pike has already devoted an entire novel – The Grindhouse – to the affair that embroiled Kong in the world of Diablo Snuff. Nevertheless, with Slaughter Box focused upon events that take place before and after key incidents that are left off-page, the novel is left with a curious hollowness to it.

This is a forgivable flaw, however, as Pike does a good job within the confines of his premise. The deathtrap sequences that dominate the novel’s half are well-handled, and the violence and tension are accompanied by a strain of thoughtfulness. The central premise of murders taking place at a screening of horror films allows room for musings about the paradoxical appeal of fictional horror in the face of real-life horror – as when Kong’s narration touches upon the phenomenon of extreme haunted-house attractions where visitors have to sign waivers before taking part.

Kong’s childhood friendships are sufficiently fleshed-out to impact the portions of the novel depicting his adult life (he still feels guilt about dating Sammy, the little sister of his boyhood best friend). His military background, likewise, adds texture to his characterisation and remains relevant after he is demobbed. The characters who turn up alongside Kong and Sammy in the cinema are well-drawn, with even the broadest caricatures taking on a pitiable aspect when the killings start.

The novel does stumble a few times when depicting the amorphous Diablo Snuff, falling back on the sort of obvious pop-culture comparisons that are best avoided: mysterious robed figures are compared to “creatures from The Dark Crystal” while Kong finds himself reminded of The Cabin in the Woods when contemplating the people behind his ordeal. The supernatural aspects of the story are genuinely satisfying, though, and are neatly tied up with a return of the Slenderman-like figure from Kong’s childhood.

What really holds Slaughter Box together is the strength of its main character. Kong is a soldier defined by bravery and commitment, but also suffering from various traumas that occurred before, during and after his time in Afghanistan. On top of this, his attempts to live a normal life are coloured by a distinct sexual maladjustment. He makes an intriguing and multi-faceted guide through the novel’s horrific narrative, one who allows us to forgive the occasional gap in the plot.