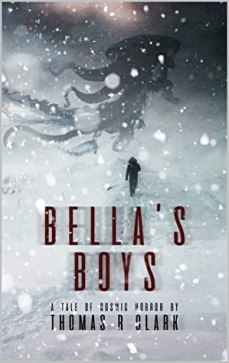 In March 1993 metal singer Corey Collins meets the girl of his dreams at a karaoke bar in the small New York town of Fenton. Named Sandy “Btella” Bellavia, she captures Corey’s attention not only with her physical beauty but also her badges honouring sundry metal bands: “she had sworn the blood oath at the altar of the Gods of Metal, making her hard as tempered steel.”

Bella takes Corey home with her, and he is initially eager for a night of sex and metal. It soon turns out that Bella is not all she appears to be, however, and Corey’s new beau is none other than an ancient demoness of ice and snow. Furthermore, with Fenton hit by a heavy blizzard, Bella is in her element – and Corey’s chances of escape are drastically reduced…

Bella’s Boys is based partly upon author Thomas R. Clark’s experience of being an early-nineties metalhead who found himself caught up in the vast blizzard that his the eastern US in 1993, with a twist of cosmic horror. In creating his eldritch villainess, Clark draws upon the mythology of multiple cultures. Bella originated as as Sbli’rldlnisa-aea, the Great Old Goddess of the Ice and Snow, but to the Norsemen who came across her she became Angraboda, the daughter of Hel and the Fenris Wolf. Native American beliefs also play a part, with Fenton located near an Onondaga reservation. In the folklore of this people, Bella is known as Ne-On-Yar-He (or “Neon Harry”, as Corey corrupts the term). We see Bella’s history unfold via sequences written from her point of view as she preys upon humanity through the ages.

The novella is bleak. Not just because of the calculated cosmic nihilism that generally comes with Lovecraftian fiction but because of how the protagonist’s all-encompassing dedication to metal music has clearly got him nowhere in life. Although Corey is the lead singer of a band, the story never conveys the sense of a bright future being ahead of him; instead, what comes across are the fragments of his past, long since smashed to meaninglessness.

Corey himself is just another in a long line of young men to end up in Bella’s day-glow blue tentacles. Multiple flashbacks introduce us to past victims, typically sharing Corey’s taste in music; the cumulative effect of these is to portray the metal scene as a graveyard – and Corey even encounters zombie versions of his bandmates for the climax. Corey’s dead father is another lingering presence in the narrative; but rather than affection, sorrow or even resentment, the protagonist’s memories of him are coloured primarily by a faint queasiness at the deceased dad’s habit of making inappropriately sexual jokes around his son. The death scenes, meanwhile, are gruesome indeed:

Johnny Collins, on the other hand, didn’t know his wife and son had been in the apartment. He never heard her scream; he never saw his son’s look of astonishment. How could he? By this point, Bella had already started to consume him, face first. Acidic sections removed his lips, cheeks and tongue. The gyrating of her pelvis was the only thing forcing Johnny’s jaw to open and close. Subsequently, this allowed him to continue to nibble on her clitoris and bring he to squirt more of the acidic ejaculate, melting the flesh off the bone with each orgasm. It didn’t matter if Johnny’s face had left his skull, he would soon join Them and thus be with he forever.

The novella’s ambivalent attitude towards metal culture – a clear love of the genre and its iconography mingling with a cynical unwillingness to give the metalhead characters anything other than empty, doomed lives – is embodied by the character of Bella.

Bella’s beauty is otherworldly, as when she strips naked in the middle of the blizzard to leave snow-angels on the ground, seemingly impervious to the freezing cold; but also artificial, as though she is a

product of mass-produced pop-culture iconography: she is at one point described as looking like “a living Boris Vallejo painting”. The first hint that Bella is not as perfect as she appears on the outside is the foul state of her toilet, a detail Corey unwisely decides to ignore – despite being utterly grossed-out by the sight of the black, hair-encrusted slime that lies below the lid.

The polar opposite of Bella is Bobbie Be Good, another woman who frequents the same bar as Corey. Physically unattractive, plainly-dressed, forthright about such topics as changing her grandmother’s nappies and – possibly as a result of Bella interfering with Corey’s perceptions – suffering from a body odour issue when she first appears, Bobbie is decidedly unglamorous, yet she is a decent sort who would have made an infinitely better partner for Corey. Despite all of its blood and thunder, the novella has a homely subtext that would have been right at home in a children’s storybook: “it’s what’s inside that counts.”

After the main story is finished, the final fifth of the book is taken up with two backup features. One is a Vikings-versus-zombies short story entitled “Prey for Change”. The other is an autobiographical essay in which author Thomas R. Clark describes his own experience with the blizzard of March 1993 that inspired the fictional tale of Corey and Bella.