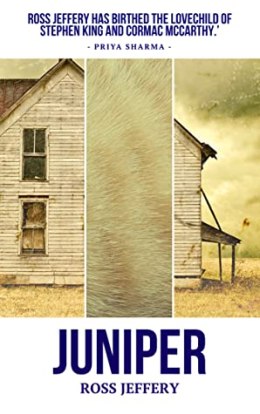 Juniper is a small and obscure town in America’s deep south: “You wouldn’t find it on any map, try a you might, because it seemed to evade those looking for it, hidden within a crease or untraceable like floaters in the eye.” Those who live near the town despise it; those who live within merely survive it – something that has grown increasingly hard. A flood wiped out Juniper’s main industry of farming, and after this came an intense heatwave that plunged the town into outright famine. In desperation, the residents begin breeding cats for food, referring to their feline food-source simply as “livestock”.

Ross Jeffrey’s novella is in large part the story of two women. One is Betty Davis, an ambiguously-aged recluse who lives on the edge of town and has been forced to survive on roadkill scraped from the cracked tarmac. Her latest discovery, a large ginger tomcat, turns out to be – despite a serious amount of injury and mangling – still alive, and so it becomes her companion rather than her next meal.

The other protagonist is Janet Lahey, whose brutally abusive husband Klein was put away only to be released on alleged good behaviour. He remains as abusive as ever while Janet is forced to live with him, the man she once tried and failed to redeem. During her period living alone, Janet looked for a new purpose in life and became the person who hit upon Juniper’s salvation by breeding cats – initially to catch mice and so preserve crops, and then to become livestock:

At first, she thought she’d sunk to a new low in her quest to pacify the hunger burning within her, the desire to fill her stomach with more than just moonshine and seeds. Janet thought of herself as an abhorrent monster, partaking in some kind of maternal filicide. But that was crazy: her real children were long gone, the cats just filling a maternal hole and loneliness brought on by Klein’s incarceration.

Juniper’s gross-out high-concept is the copious quantity of cat-eating, with various town moggies being spit-roast and consumed by the famished residents, ensuring that this is probably not the best novella to be enjoyed by a dedicated cat person. The impact of how the townspeople treat their cats is either softened or strengthened (depending on the reader) by the detail that these are not adorable balls of fluff but rather over-large, misshapen specimens that resulted from generations of inbreeding: the ginger tom adopted by Betty was once Janet’s stud, and factors into more feline family trees than is entirely healthy for the gene pool.

The cats are not all of the story, however – far from it. Ross Jeffrey shows a knack for filling in the history of his fictitious town and its inhabitants using anecdotes that drift into the heads of his protagonists as they go about their lives; these narratives segue from the pointless, to the melancholy, to the gruesome:

As Betty trundled along she sucked on a piece of corn, to keep saliva running and to stop dehydration setting in, it also prevented her sand dune of a tongue from sticking to the roof of her mouth. She recalled as if from a dream the name Jud Dibbers. He was able to spit corn into a hat from well over twenty feet; he was in the Guinness Book of World Records, until someone from Mantiowoc County beat him by another two feet and then he and Juniper disappeared from memory. For a fleeting moment she’d forgotten what had happened to Jud Dibbers, but then she remembered hearing about him growing depressed, ended up painting his shed brain grey with a shotgun.

Forming the novella’s emotional core are the relationships – both utterly warped, albeit for very different reasons – of the two protagonists. Betty’s relationship is with the ginger tom: the latter is prone to ejaculating around the lonely woman’s home, so much so that she is eventually forced to neuter her adopted pet with scissors and thread. The overwhelming emphasis placed on the cat’s genitals, described from the perspective of Betty, borders on the zoophilic, and the novella keeps on finding new ways to drive this association home. In one scene, Betty sees photographs of disfigured veterans – husbands home from war – and is immediately reminded of the mutilated tomcat, he own battle-scarred surrogate husband.

For all of its queasiness, this relationship has a warmth that places it in contrast to the coldness and brutality between Janet and Klein. Paranoid and controlling, prone to both kneejerk physical violence and more calculated acts of cruelty like burning the religious texts that give his wife comfort, Klein is disturbingly credible as an abusive husband.

Jeffrey has put care and effort into ensuring that these two cat-eating cat-ladies are more than just grotesque caricatures. As we follow the life journeys of the main characters, the novella shows genuine empathy and humanity – even if, particularly in the case of Betty, the journeys ended up in very strange places. The narrative reaches a satisfying, even inevitable conclusion when the saga of Betty and Tom runs headlong into the relationship between Janet and Klein.

Juniper is the first volume in a projected trilogy; the second, Tome, is also up for a Splatterpunk Award in the Best Novel category.