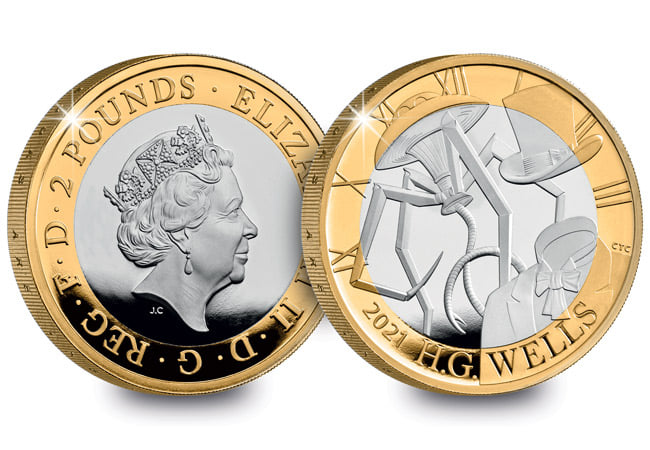 One event this month that was generally filed in the science fiction category, but is nonetheless horror relevant, was the unveiling of a commemorative one-pound coin celebrating the work of H. G. Wells. The engraving by Chris Costello shows a Martian tripod from The War of the Worlds alongside the Invisible Man – although it has provoked a good deal of criticism on the grounds that the tripod has four legs and the Invisible Man is wearing the wrong clothes (there’s also the issue that Wells is misquoted on the side of the coin). Accuracy issues aside, I have to say it’s a pretty nice-looking coin – although not half as metal as the skull-and-rose coin that Shakespeare received a few years back.

The Horror Writers Association announced the preliminary ballot for the year’s Bram Stoker Awards, containing all of the works that are in the running to become nominees on the final ballot. Because I’m that sort of person, my eye was immediately drawn to the Short Non-Fiction category (introduced in 2019). There is a reasonable variety here, although the dominant theme is clearly Stephen King:

Guy N. Smith was an extremely prolific British horror writer who began his career in the seventies and remained active well into the twenty-first century. He is best known for his 1976 novel Night of the Crabs and its many sequels, the most recent of which – The Charnel Caves – was published in 2019). He passed away on 24 December 2020 aged 81 after testing positive for COVID-19, but his death was not widely reported until this January.

Barbara Shelley was an actress who appeared in a number of British horror films during the fifties and sixties. She entered the genre with Cat Girl, a 1957 film in which she played a woman under a curse; she later starred in Hammer’s The Gorgon as the human alter-ego of the titular snake-haired monster, perhaps her most famous role. Her other performances of note include Dracula: Prince of Darkness; Rasputin the Mad Monk; Quatermass and the Pit and Village of the Damned. She passed away on 4 January at the age of 88, having contracted COVID-19.

Storm Constantine was a British writer best known for her Wraeththu series, which was influenced by her time in the Goth subculture of the eighties and began in 1987 with The Enchantments of Flesh and Spirit. Five other volumes followed, the most recent being 2006’s The Ghosts of Blood and Innocence. In 2000 she founded an independent publishing company, Immanion Prss. She passed away on 14 January, aged 64.