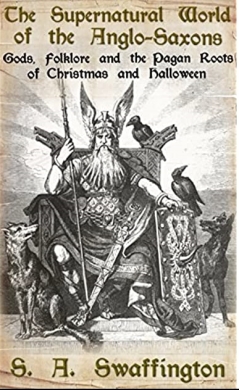 Now and again I’ve posted on this blog about creatures of folklore, like the Dullahan and Jimmy Squarefoot. One of the things I found frustrating when researching them was how sloppy a lot of the writing available online was. Yes, we’re talking about creatures that don’t actually exist, but there’s a world of difference between documenting authentic folklore form the past and simply making things up on the spot.

The most galling thing is when this shoddy research escapes from wiki articles and makes it into actual books that purport to be authoritative. I’ve recently been reading a book by S. A. Swaffington called The Supernatural World of the Anglo-Saxons: Gods, Folklore and the Pagan Roots of Christmas and Halloween, and it’s a prime example of folklore studies gone wrong.

At first, I considered going easy on the book: it’s a self-published work by an obscure author, after all. But then I looked at its Amazon page and saw a fairly substantial number of ratings, more than half of which gave it five stars. Clearly, there are people being suckered by this terrible piece of work, so I felt it was time someone stepped in and helped prevent any of this tosh from contaminating future scholarship.

There are so many flaws in The Supernatural World of the Anglo-Saxons that it honestly took me a while deciding where to begin listing them, but here we go…

Although the book is nominally about Anglo-Saxon folklore, Swaffington spends a large chunk of his time discussing the folklore of Germany, Austria and Scandinavia. He claims that the word “fairy” is derived from Old English (no: it’s French in origin). He includes sections on gremlins and the Beast of Bodmin Moor, despite the fact that these are beings of twentieth century folklore. He claims that the word “puke” is etymologically derived from the name of Puck, the fairy immortalised by Shakespeare; I can find no other source even suggesting a connection. He says that a king named Henry XIII was on the throne in 1542. He claims that the story of Snow White dates back to the Middle Ages, and then goes on to describe a theory that the title character was based on Margarete von Waldeck – who was born in 1533, after the Middle Ages.

If you want a clear illustration of Swaffington’s low standards of research, just look at this:

Orcs are best known from The Lord of the Rings by J. R. R. Tolkien, but Tolkien didn’t invent them. The term ‘Orc is Old English, meaning foreigner, monster, or demon […] Interestingly, when the Normans conquered England in 1066, the English referred to their conquerors as Orcs.

I can find absolutely no evidence that the word “orc” was ever used to describe Normans or other foreigners. The only Anglo-Saxon documents I know of that mention orcs are Beowulf (which uses the word orcneas) and this Latin/Anglo-Saxon glossary, each of which is clearly using the term to refer to some sort of supernatural creature.

Where did the idea that Anglo-Saxons called Normans “orcs” come from? The most likely culprit is a television series, broadcast in 2009, called 1066: The Battle for Middle Earth. This is a work of historical fiction which, as its title suggests, tried to cash in on the success of the Lord of the Rings films, often in a rather contrived manner; amongst other things, it had the Anglo-Saxons referring to the Normans as orcs. I’ve found a few web pages repeating this claim, but none of them cite actual Anglo-Saxon documents, and all of them post-date 1066: The Battle for Middle Earth.

So, Swaffington seems to be treating a television series as a legitimate source document about Anglo-Saxon history. Not a good sign.

The book contains many other serious lapses. It includes a section on Krampus, the devil who – in Austrian folklore – punished naughty children on Christmas. Swaffington claims that Krampus’ habit of abducting children in sacks “almost certainly refers to the terror that the Muslim Moors, also known as Barbary Pirates, brought to Europe”, after which he writes at length about incidents in which Europeans were taken as slaves by Muslims. Nowhere does he provide any actual evidence that this was an influence on the Krampus story; indeed, he emphasises incidents in Britain and Ireland, which are unlikely to have impacted Austrian folklore. Isn’t it more likely that the Krampus story comes from the fear that all children have of being taken from the safety of home and family?

Swaffington then goes on to theorise that Krampus was originally a benevolent figure, “a God, a healer of children, or perhaps a spirit of some kind” who beat children so as to cure them of demonic possession – apparently unaware that this theory undermines his earlier insistence that Krampus was based on Muslim pirates. On top of this, he later points out the similarities between Krampus and Beowulf’s foe Grendel, who also carried people away in sacks… yet Beowulf was written about six hundred years before the activities of the Barbary pirates.

The rant about Muslim pirates is just one of many eccentric asides that any decent editor would have asked Swaffington to cut. When talking about werewolves, he mentions that the term “werewolf” was applied to Nazi guerrillas who fought allied troops in Germany, and uses this as an excuse to offer a weirdly romanticised description of their activities:

In 1945, as the Allies fought their way into Berlin, thousands of young German boys lived on the fringes of towns and cities, in the surrounding forests, and fought the invaders using guerrilla tactics. With the main German army destroyed or detained in concentration camps, the young boys were all that stood between their mothers and sisters and the oncoming soldiers.

Yet another problem is Swaffington’s sourcing of images. The book’s section on Rawhead and Bloody-Bones has a picture that looked, to me, like a modern children’s book illustration. I did the leg-work online and found that the drawing was by Andrew L. Paciorek – but Swaffington didn’t bother to credit him. Did he even get permission to use the art, I wonder?

Note that all of the above issues are found in a single chapter. In the book’s other sections – covering deities, the calendar and folk traditions – we find still more dubious assertions and outright errors. Swaffington claims, wrongly, that holly takes its name from the word “holy”. He states, as accepted fact, that Herne the Hunter (an antlered ghost in Shakespeare’s Merry Wives of Windsor) is derived from Odin – hypothetically possible, but not necessarily true. Vortigern’s recruitment of Hengist and Horsa is treated as a genuine historical event, rather than a legendary narrative involving personages who may never have existed. And so on, and so on.

It’s tempting to conclude that Swaffington just doesn’t know how to research his topic, but the galling thing is that clearly he does: for every suspect or false assertion he makes with no source at all, there’s usually another statement that he is able to back up with an excerpt from a legitimate historical text.

How, then, did Swaffington manage to get so much wrong even after familiarising himself with authentic sources of information? I have two possible explanations.

One possibility is that the book was written for purposes of self-promotion.

Amongst the texts Swaffington quotes from is something called Offa: Rise of the Englisc Warrior; I looked this up and found that it was a work of fiction written and published by Swaffington himself. Yet he treats it as a legitimate source for historical information: while talking about wolf-skinned berserkers, he quotes from his Offa novel alongside the Haraldskvæði and the Prose Edda, as though it has the same validity as a reference. Only at the very end of folklore book, in the “also by S. A. Swaffington” section, does he admit that he wrote Offa: Rise of the Englisc Warrior himself. With this in mind, it’s easy to see The Supernatural World of the Anglo-Saxons as little more than a cheap attempt to boost his profile as an historical novelist, with facts deemed less important than spinning a good yarn.

The other possible motivation is ideological. At the very end of the book the author goes on one of his characteristic rants:

Today, we live in an age of decadence and decay, where life is no longer sacred, and healthcare comes at a price; when young ones are murdered in their mother’s womb; a time when men and women are encouraged to hate one another; a time of religious and economic conflict; a time when our leaders worship the economy and serve bankers as their Gods; where mankind pollutes his own seas, tears down his forests, poisons the food we eat, the air we breathe, pours fluoride into our water supply, a time when our media teaches us to fear and to hate. We live in a time when our young men and women are taught that they have no value.

I promise you it was better before, when we were Pagans and life was sacred, when every child was thought a blessing from the Gods. There were happier times than this, when the people would come together to worship the Gods, to sing and dance, to cure sickness and disease…

Let’s leave aside the ludicrous implication that we were better at treating diseases before the development of germ theory and modern medicine, and the outright disturbing suggestion that an era of human sacrifice (as Swaffington states elsewhere that Woden/Odin was “associated with rage, fury and war, human sacrifice, hanging and death”) constituted the good old days. What’s remarkable here is how this reactionary sentiment sheds new light on the rest of the book.

Throughout The Supernatural World of the Anglo-Saxons Swaffington employs a distinctly embattled tone, portraying Anglo-Saxon culture as having been constantly chipped away first by Christians, then by Normans, and latterly by political correctness. He also claims that the subject is somehow being suppressed: “We are taught in England that English history begins in 1066” he says near the start, in yet another of his erroneous assertions (it took me a few seconds’ Googling to confirm that, in reality, the arrival of Anglo-Saxons is indeed covered by the National Curriculum). Note, also, the xenophobic subtext to so many of the book’s shoddier stretches, from the lecture about Muslim pirates shoehorned into the section on Krampus to the ahistorical suggestion that Anglo-Saxons referred to foreigners as “orcs”.

So, The Supernatural World of the Anglo-Saxons is a nationalist text. Few things distort history – including the history of folklore – quite as severely as nationalism. In this book, Swaffington draws upon his background as an author of fiction to dream up a bygone England, filled with magical beings from Puck to Odin to Krampus – until the Christians, Muslims and liberals came along to wipe out the old religion, suppress the true history and put fluoride in the water supply. But it’s not too late, the book implies, for the English to turn back the clock and return to a happier time, a simpler time, when we all worshipped a god of human sacrifice and didn’t have to put up with foreign “orcs”.

All of this is precisely the sort of thing that anyone researching folklore should be on the alert for – and if possible, should help to quash if they see it starting to gain ground.