After I took a look at Jungle Comics #1 there was one character who stuck in my mind: Camilla, Queen of the Lost Empire. Credited to “CAW” (apparently this was an artist named C. A. Winters, but I can find little information about him online) the original strip was an imitation of H. Rider Haggard’s She that ended with the titular Camilla dead. But later issues not only revived Camilla, they eventually turned her from villainess to heroine. I decided to take a closer look at how the transformation took place…

The Camilla story in Jungle Comics #2 is still credited to CAW, but there are distinct stylistic differences. At first glance I wondered if a ghost artist was responsible; on closer inspection, I now suspect that CAW simply had a different inker. I wouldn’t be surprised if he had a different scriptwriter as well, as a number of changes have crept in to the story’s setting: Camilla is now described as a descendant of Genghis Khan rather than a Norsewoman, and her hidden city has suddenly become a science fiction world filled with hi-tech gizmos (bear in mind that, in the first story, the highest technology we saw was a souped-up lightning rod). There’s no explanation as to how Camilla and her city survived their destruction at the end of the previous story, but really, that’s just one of many inconsistencies.

The main character this time is Captain John Stanley, a jungle traveller who is attacked first by a “strange little rocket ship” and then by a band of blue-skinned men who carry advanced firearms. After being paralysed by “an electric radio beam” Stanley is taken to see Queen Camilla, who shows him around her city and reveals that it contains such valuable materials as “flexodium, a radium ray unknown to the outer world”. She offers Stanley the chance to rule alongside her as king; when he refuses, she is angered (“You shall die in one of our flexodium torpedoes hurled into space!”). The hero manages to destroy the city by sabotaging Camilla’s machine, but the queen herself survives.

Issue 3 undoes most of these changes. Camilla is again a descendent of Norsemen, ruling over Vikings rather than blue people, with nary a sci-fi gadget to be seen. Her costume is now a mixture of her first two appearances: she has a winged helmet from issue 1, plus a harem-style outfit from issue 2. The story also brings back John Dale and Ruth from the first adventure, who decide to return to the ruins of Camilla’s city. Camilla herself blames Ruth for its destruction; the story makes no reference to the fact that the city has now been destroyed twice. 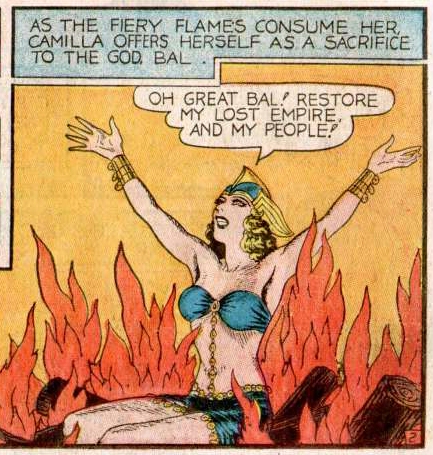 But this time, we see the city being rebuilt: teaming up with an aged magician, Camilla climbs into a funeral pure and offers herself as a flaming sacrifice to the god Bal (who seems to have replaced Thor as her deity of choice). The city is restored, and Camilla – whose sacrifice was apparently not fatal – again rules as queen. Once the explorers arrive, Camilla orders Ruth thrown into a blue spring (“The blue bath has the power to take away youth, just as my other spring holds the power of eternal life!”) Ruth ages rapidly, but Jon saves her by giving her a drink from the spring of eternal youth. Then, just as he did in the first story, Jon throws a burning torch into the spring of youth; after that, he leaves Camilla to die. 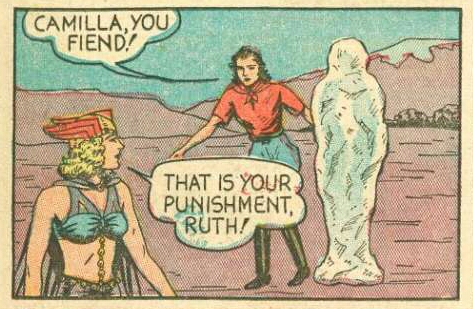 The story in issue 4 picks up where the previous tale left off. Camilla knows that her eternal youth is gone and loses the trust of her subjects, whose rebellions she attempts to quash (“Flay them alive in the torture pit!”) but is nonetheless driven out of the lost city by angry commoners. Outside she meets Jon and Ruith, and “calls upon the gods to transform Jon into a mass of ice”. This turns out to be blackmail: she explains to Ruth that the only way to cure Jon is by finding a new spring of eternal youth. Ruth pays some helpful natives who point her in the right direction, and Jon is cured in time to deal with a nasty purple snake that guards the spring.
After taking a dip herself, Camilla is not only rejuvenated but changed on the inside as well: she vows that she has forsaken her old cruelty. The people of the lost city gladly place her back on the throne, and she allows Jon and Ruth to depart on good terms.

Issue 5 sees a change in creative team, with the strip now credited to “Ted Carter” (apparently the artist was actually Bob Powell). We are told that Camilla has ruled her lost queendom “for three years in perfect peace and harmony” until it was troubled by a foe: Thorgson, a Viking warrior who claims to the rightful ruler. “I will prove him wrong by matching him in a display of supernatural powers”, boasts Camilla. The conflict quickly turns violent, with Camilla stabbing Thorgson, after which she is confronted with his army (which consists of Africans dressed as Vikings). Camilla fights them off using electric generators, a return to the sci-fi aspect seen in issue 2; once subdued, they join her personal army.

The story ends by introducing the scheming Count Knuten, who plots to overthrow Camilla. In issue 6 he recruits the deaf hunchback Caredodo (clearly based on Charles Laughton’s Quasimodo) to assassinate the queen, only for the two to end up as allies in a battle against a race of ape-men. Things get even stranger in issue 7, where Camilla and Caredodo confront Satan himself – depicted as a two-headed ogre – and also meet a more conventionally devilish Mephistopheles, before Caredodo is transformed into the tall, handsome Sir Champion by the Angel of Faith. 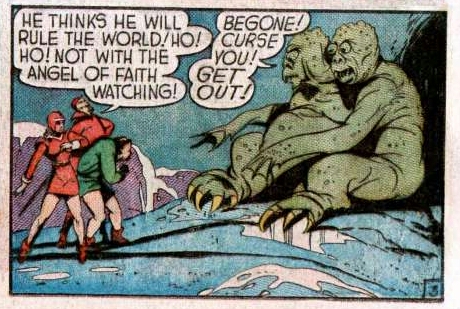 I could go on, but you get the picture. Evidently the creators of the Carmilla strip saw the limitations of making her a villain whose city is destroyed each issue, and made her the hero of the story. Ironically, the story formula remained much the same: every month, Camilla had to defend her throne from attempts at overthrow.