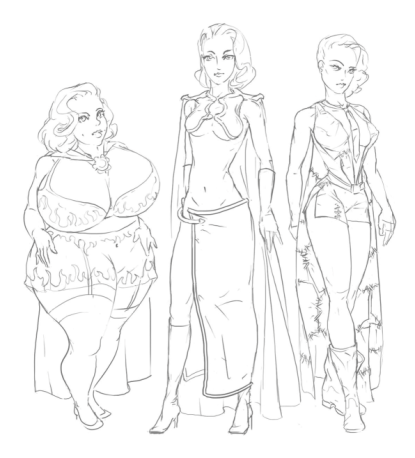 It’s been a while since I posted any updates about the comic I’m writing, Midnight Widows. Progress has been slow, truth be told — but there has been progress. Issue 2 is pencilled, inked and about two-thirds coloured. Meanwhile, some substantial work has also been done on issue 3. As I type this, Delia Mihai — who painted the lovely cover to the first issue — is wrapping up a sequence as guest penciller. Meanwhile, back in issue 2, Jio Butler is carrying on with her colouring. And last but not least, our lead artist Marcela Hauptvogelova has dreamed up a new set of costuems for the Widows, which they will be wearing for a World War II sequence come the third issue.

While I can’t make any promises, it’s entirely possible that issue 2 will be finished by the end of this year. After that, who knows? I may well be launching a crowdfunding campaign for issue 4 some time next year.

Make no mistake: Edith, Kateryna and Gabriela aren’t going away any time soon. In the mean time, you can follow the official Midnight Widows Twitter account. If you still haven’t read issue 1 yet, then don’t forget that you can snag a PDF file in return for a donation to my Patreon or Ko-Fi.

The comic’s official synopsis is as follows…

When the Count was slain, his brides were freed.

Edith, Kateryna and Gabriela were once the brides of Dracula. No longer confined to the castle of their groom, they are free to travel from nineteenth century Transylvania to twenty-first century London.

And now, a new threat has made itself known. Some of Britain’s most notorious serial killers have come back from the dead to resume their murderous careers. Who resurrected them, and why? Only the Midnight Widows stand a chance of finding out…