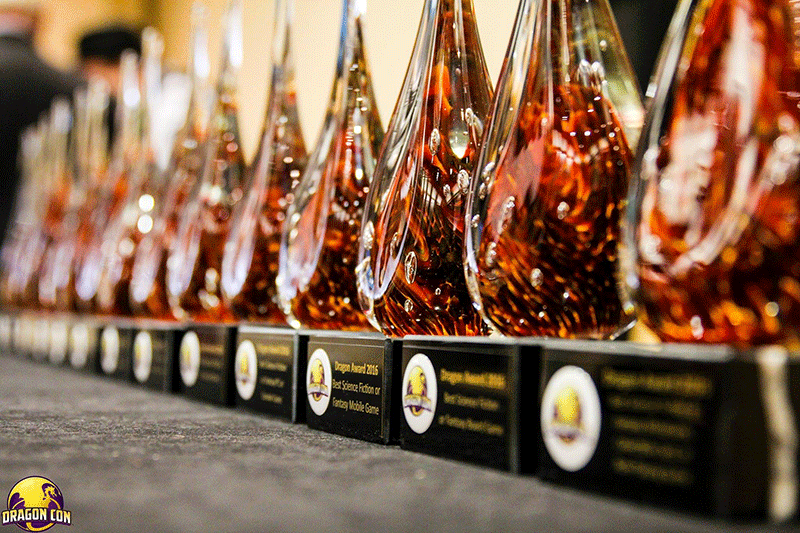 The ballot for the 2020 Dragon Awards was released earlier this month, and I’ve already posted my thoughts – namely, on the size of the overlap between them and last year’s Goodreads Choice Awards. For those unaware, the Dragons and the Goodreads Awards are both decided by public vote, with the latter getting considerably more participation. The increasing similarity between them suggests that the Dragons are receiving votes from a larger pool than in previous years – and, by extension, doing a better job of living up to their stated aim of representing the tastes of the broader SF/F fandom.

For those who want the Dragon Awards to award the most popular books in SF/F, this is a positive development. But there’s a group of people out there who are decidedly unhappy. A number of right-wing indie authors – you may recognise some of them from the Puppy campaigns that took place at the Hugo Awards a few years ago –are extremely displeased at the Dragons making a swing towards more popular books.

Declan Finn, who was a Dragon Award finalist in 2016 and 2017, wrote a blog post objecting to the fact that this year’s Dragon ballot includes books that he, personally, is unfamiliar with:

You know, I am fairly hooked into the book community. If I don’t read every book, I at least hear about a lot of them. Even if I take one look and decide I don’t want to read it, I at least check it out. Then I saw the 2020 Dragon Award ballot and wondered who the fuck any of these people were. Seriously, what sort of shit show is this?

Finn clearly associates books that he doesn’t know about with books that don’t deserve praise, dismissing most of the finalists as “crap” and concluding that “this year’s ballot sucks”. By the end of the post he appears to have become unhinged with fury:

I FUCKING WANTED PEOPLE TO DISCUSS BOOKS FOR THE DRAGONS. WHAT DID EVERYONE THINK I WAS DOING IN 2018 AND 2019? COMPILING EVERY ELIGIBLE BOOK BECAUSE IT WAS FUN? I DID IT FOR MY HEALTH? THAT WAS EXTRA WORK I DIDN’T NEED TO DO.

Let’s put his objections in context. One of the Dragon Award finalists is Ninth House by Leigh Bardugo. This won a Goodreads Choice Award with 53,400 votes. Now, okay, that’s a combined sum from a three-stage voting process, so we’ll need to divide by three to get a clearer idea of how many individual voters took part. But we’re still left with around at least 17,800 voters – more than the Dragon Awards have attracted in any past year of their existence. And yet according to Declan Finn, those 17,800 voters are irrelevant because he hasn’t heard of the book.

Incidentally, one of the books Declan Finn lobbied to be nominated for the Dragon Awards was his own novel Deus Vult, which currently has under 60 ratings between Amazon and Goodreads. Yet, he appears to genuinely believe that it’s more deserving of a popular-vote award than Ninth House.

Another author objecting to this year’s Dragons is Brian Niemeier, who won a Dragon in 2016 and was a runner-up in 2017 before, like Finn, vanishing from the ballot ever since (he also thinks demons are turning people into Marxists and supports a known plagiarist, but all that’s a different matter).

Like Finn, Niemeier argues that the ballot contains a number of underserving finalists, including one about lesbian vampires; he apparently sees this as a “humiliation scripture”, as though lesbian vampires are some radically new concept invented by Tumblr SJWs rather than an exploitation staple since the seventies. He blames the situation on the pandemic, making the shaky argument that Dragon Con migrating to the Internet for 2020 has lowered interest in the online voting process of the Dragons.

For all of his curious allusions to witches and Satan Niemeier seems relatively laid-back in comparison to the all-caps outrage of Finn. That is, until we come to this exchange in the comments section: 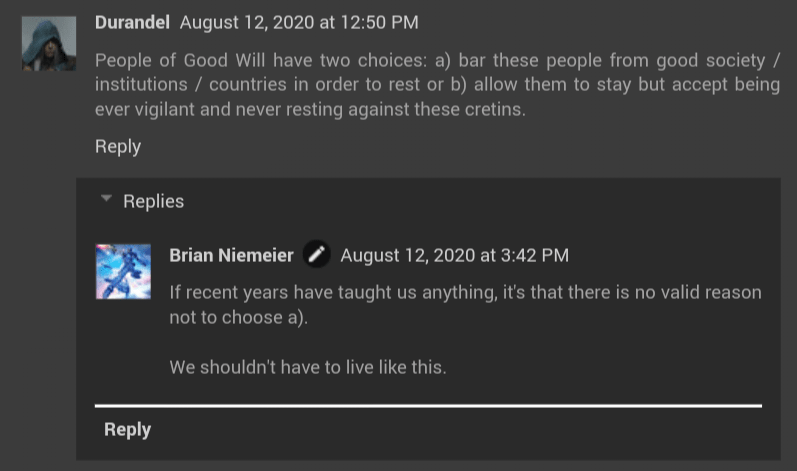 So, we’ve reached the point where Niemeier is calling for authors and/or voters he finds problematic to be banned from the Dragon Awards and possibly even deported from the country. In the past, Niemeier proudly hailed the Dragons as representing “the unbiased votes of fandom as a whole”. But now, clearly, he’s decided that fandom as a whole contains too many people who fail to conform to his exacting standards, and that a healthy dose of bias will be necessary to set things right.

Finn and Niemeier are not the only right-wing commentators spitting venom at the 2020 Dragon Awards – see this Twitter thread for more. But exactly what is it that these people find so objectionable about the awards this year?

One complaint that came up is that the Dragon Awards resemble this year’s Hugo Awards. Leaving aside the assumption that it’s somehow objectionable for the Dragons to share books with the Hugo ballot, let’s see how much truth there is to this observation. Looking at the Dragons’ science fiction novel category, there’s certainly a big overlap with the Hugos: of the eight authors represented, three were on this year’s Hugo ballot and three more have been Hugo contenders in the past; the only authors in the category who have never been up for a Hugo are Margaret Atwood and Chuck Wendig. So far, so Hugo-adjacent.

But comparisons start to fall apart when we look at the other categories. Of the six Best Fantasy Novel finalists only one – Jeff VanderMeer – has ever been on a Hugo ballot. Best Horror Novel is only marginally more Hugo-heavy, with two former Hugo finalists – T. Kingfisher and Cherie Priest – amongst the five contenders. I’ll admit that I haven’t taken a close look at the awards history of the writers in the novel categories, but suffice to say that I recognise only one name – Rebecca Roanhorse, who’s up for Media Tie-In – from the Hugo ballots of recent years.

So, we’re looking at ten authors who have been Hugo contenders at one point or another, on a ballot that features dozens of novelists. That’s not particularly remarkable, especially when we consider that the 2016 Dragon Award ballot also had a number of authors who’d appeared at the Hugos: leaving aside the authors who got into the Hugos through the Puppy campaigns, I’m counting John Scalzi, Ann Leckie, Brandon Sanderson, N. K. Jemisin (who made the ballot twice), Fran Wilde, Naomi Novik and Kim Stanley Robinson. Going from seven Hugo-nominated authors to ten Hugo-nominated authors is hardly a colossal expansion.

Another recurring complaint derives from the fact that John Scalzi is a finalist (for those unaware, Scalzi has long been something of a bête noir in Puppy circles, largely due to his feud with Vox Day). But as this is Scalzi’s third Dragon Award nomination, his presence is likewise unremarkable.

Are Niemeier and Finn angry that they, themselves, didn’t make the cut? If so, they should have paid closer attention: neither of them has made the Dragon Award ballot since 2017. Nor has L. Jagi Lamplighter, who was cited in the Twitter furore as an author who should have made the cut.

Are these people angry at the relative lack of independently-published books? This’d certainly be consistent for them, given that Niemeier has repeatedly decried the major publishing companies while Finn published a Dragon ballot heavy on indie books. But again, this would indicate a lack of observation on their part. Last year’s showed a general decline in small-press representation, as I discussed in my report at the time.

Perhaps they’re disgruntled that Baen Books hasn’t had much of a turn-out this year, with only one book on the ballot (compare this to last year, when three of seven Dragon-winning novels were from Baen.) On the surface this would seem logical, as Baen publishes a number of Puppy authors including Dragon winners Larry Correia, Brad Torgersen and Sarah A. Hoyt. But the Baen authors are aligned more with the Sad Puppies, while the wrath-spittlers quoted in this post are largely affiliated with the Rabid Puppies, a faction that operates various small-press outfits. Some of them have openly derided last year’s Dragons for the amount of Baen winners.

My impression, ultimately, is that the source of the rage we’re seeing across these tweets and blog posts is something formed by all of the above factors together: the end of a cherished narrative.

The Puppy campaigns were, ostensibly, a movement opposed to gatekeeping in SF/F fandom. And, in fairness, some of the people involved may well have held that principal. But it’s patently obvious that a number of the Puppy authors just want to become gatekeepers themselves: we can see this as plain as day when Brian Niemeier openly advocates for books he finds ideologically problematic to be forever banned from the Dragon Awards.

In practice, of course, these people could never become gatekeepers as they have no gates to keep. But they can at least pretend to be gatekeepers, so long as they have a narrative fit for purpose. When the Dragon Awards were established around the tail-end of the Puppy campaigns at the Hugos, that narrative became fairy-tale perfect: the Puppies were the heroes, the Hugos were the villains, and the Dragons were the happily-ever-after.

But over the five years in which the Dragon Awards have existed, that narrative has taken rather a lot of blows. A few too many vanquished villains have returned for seats at the table; a few too many triumphant heroes have faded into obscurity; and the cast has been cluttered up with people who have no part to play in the drama (why, just look at all those authors Declan Finn’s never heard of!)

The 2020 Dragons aren’t the deathblow to the narrative, they’re merely the latest stage of decomposition. As the years have passed prominent authors like John Scalzi and Margaret Atwood have remained prominent, newcomers who had no involvement one way or the other in the Puppy kerfuffle have entered the field, and the time when an author as obscure as Brian Niemeier could win a Dragon Award is increasingly easy to explain away as the result of a low voting turnout.

The would-be gatekeepers have not quite surrendered their narrative. They’ve made a last-ditch attempt to save it by bolting on a new narrative – that the pandemic is somehow responsible for popular books like Ninth House being nominated for a popular-choice award over obscurities like Deus Vult. But let’s face it, who’s going to be convinced?

Next year’s Dragon Awards will probably see another attempt to revive the narrative, but for all intents and purposes, what we’re looking at is the last gasp of a years-long attempt at gatekeeping.