Time for another jaunt back into Norse mythology, as reimagined by 1960s Marvel comics…

Journey Into Mystery #100 opens with “The Master Plan of Mr. Hyde!” which concludes the storyline from last month. At the start of the tale Thor is a wanted man thanks to Mr. Hyde impersonating him while robbing a bank (how Hyde pulled off such a convincing transformation is never explained: was he wearing a latex mask and fake muscles, or does he have an additional shapeshifting form?). Trying to forget his troubles, Thor returns to his mortal guise as Don Blake and enjoys dinner with Jane Foster – until Mr. Hyde kidnaps the pair of them.

The villain drops Don in his hideout and leaves him at the mercy of a bomb, before taking Jane along on an attempt to steal a Polaris submarine (“I shall execute the crime of the century! And you, Jane Foster, will bear witness to it!”).

Don turns into Thor and halts this heinous plan. But Jane deliberately lets Hyde escape, wrongly believing that his capture would lead to his bomb blowing up Don Blake. Odin, witnessing this misjudgement from Asgard, declines Thor’s request in the previous issue that Jane be made an immortal: “I saw her thwart your efforts to capture an evil-doer!! Petition denied! She is not worthy!” Don’t worry, Jane, wait a few decades and you’ll be an Asgardian… 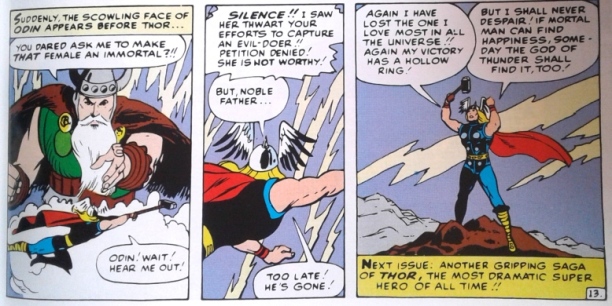 Once again, the real draw is the pseudo-mythological story that follows.

The backup feature in this issue has the full title of (deep breath) “Tales of Asgard, Home of the Mighty Norse Gods! The boyhood of Thor! The Storm Giants”. It opens with Thor and Loki as youngsters; uncharacteristically, Thor carries a sword and shield rather than his signature hammer. “As a youth from the day he was strong enough to wield a sword, Thor had dreamed of one day inheriting the enchanted battle hammer of Odin” says a caption. “But Odin’s hammer could only be won by accomplishing deeds of valor—deeds such as the one you are about to see!” The idea that Thor inherited his hammer from Odin has no basis in mythology, not is it foreshadowed in Marvel canon: Odin’s past adventures showed him wielding a sword.

“Look, Loki!” exclaims Thor. “There are the two sons of the storm giant! They have stolen the golden apples of the goddess Iduna! It is our duty to return them to their rightful owner!” Loki’s reply reaffirms his rebellious nature: “Do not speak to me of duty, Thor! I do what I will!” 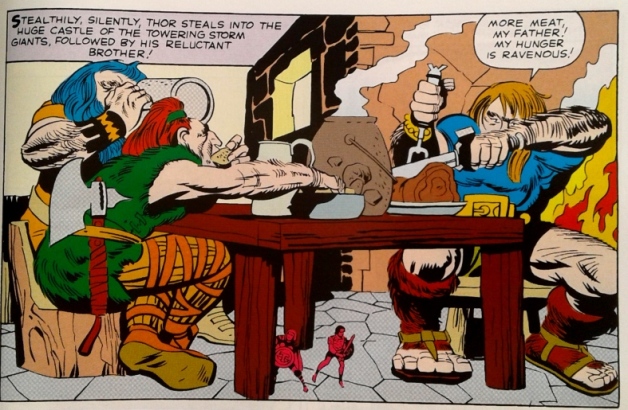 This premise is a mash-up of two distinct stories found in the Prose Edda. One is the account of how the golden apples of Idun (as she is typically known) were stolen by the giant Thjasse, who also kidnapped Idun herself. With the youth-giving apples missing, the Aesir grow old and grey, and send Loki – who was responsible for putting Idun in danger in the first place – to sort things out. With the help of Freyja, Loki turns into a falcon and flies to Jotunheim to rescue Idun. Thjasse follows him back to Asgard in the form of an eagle, only to be killed by the Aesir. The story is also told in the Poetic Edda, and one poem – Hárbarðsljóð – has Thor take credit for killing Thjasse and throwing his eyes up into the sky to become stars. Beyond this, Thor has no role in the narrative.

The other source text for this story is one in which Thor and Loki (along with Thor’s newly-acquired servants, Thjalfe and Roskva) travel to Jotunheim, where they have a number of strange adventures in a land where nothing is as it seems. They spend the night in a vast hall, only to find that it is actually the glove of a giant named Skrymer The giant gives Thor a sack of food, but when the thunder-god finds himself unable to undo the knot, he hits the sleeping Skrymer on the head with his hammer. The giant wakes and casually asks if a leaf has fallen on his head, with similar incidents occurring whenever Skrymer settles down for a nap.

Arriving in Utgard they meet the king, Utgard-Loki, who – like Skrymer – has a mischievous sense of humour (I find it interesting that this narrative, which doesn’t cast Loki of Asgard as a trickster, nonetheless features a trickster figure named Loki). This giant sets the visitors a number of challenges: eating and drinking contests, a race, a wrestling match against an elderly woman and a game that involves lifting up a cat. To Thor’s humiliation, his team is beaten each time.

Utgard-Loki then admits that, all the while, he had deceived the travellers with illusion. In the guise of Skrymer he had tied his sack of food with iron, and used an invisible mountain to protect himself from Thor’s blows. The contests had all been skewed: the winner of the eating contest was Fire, the race’s winner was a personification of Utgard-Loki’s speedy thought, and the elderly wrestler was Old Age. The drinking contest involved a horn filled with the sea, and the cat was actually the Midgard Serpent. 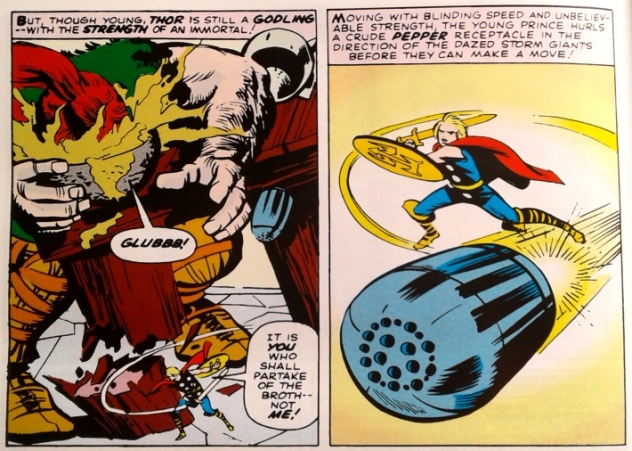 The Marvel story is slightly closer to the latter tale, but still has many differences. There are no eating contests with Fire or wrestling matches with Old Age here: what we instead have is a tale that recalls Jack and the Beanstalk or Gullvier’s voyage to Brobdingnag, finding interest in the idea of normal-sized heroes in a land of giants. Thor hurls a gigantic pepperpot at his opponents to temporarily blind them, while Loki achieves a similar effect by throwing wet leaves into a fire, filling the room with smoke. Loki then finds the stolen apples atop “Agnar, king of the eagles”, a possible reference to Loki and Thjasse’s transformations into birds of prey in the myth of Idun’s abduction. The comic story ends with more foreshadowing of the later status quo, as young Thor is deemed worthy enough to temporarily lift Mjolnir while Loki seethes with envy.

Incidentally, neither of the myths that inspired this story indicate that Thor or Loki were particularly young, although they clearly take place before Loki was cast out of Asgard. Meanwhile, the comic never identifies the storm giant patriarch by name, making it unclear as to whether he is meant to be Utgard-Loki, Thjasse, or some hybrid of the two.

To be honest, I’m not sure where the term “storm giant” originates.As far back as the nineteenth century, retellings of the Norse myths have mentioned storm giants alongside frost giants as though they are two different species (“Frost giants and Storm giants came crowding up from the deeps to see”, as Annie and Eliza Keary put it in their 1856 book Heroes of Asgard). But while the term “frost giant” comes from the Norse hrimthurs (hrim: frost; thurs: giant) I’m unaware of what term, if any, from the Eddas can be translated as “storm giant” M. W. Macdowall and W. S. W. Anson’s Wagner-derived Asgard and the Gods (1880) and Hélène A. Guerber’s Myths of Northern Lands (1895) each use this phrase in conjunction with Thjasse, as do many subsequent retellings, which might explain how the term entered Marvel’s loose interpretation of the Thjasse narrative.

Whatever its origin, as far as Marvel canon is concerned, the term “storm giant” is a useful means of distinguishing the frost giants – which Lee and Kirby had decided were literally made of ice – from the more conventional fairy tale giants seen here. Storm giants would alter end up in Dungeons & Dragons as giants with lightning powers.