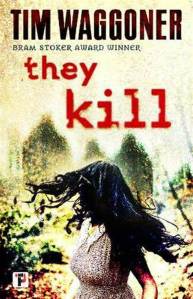 After losing her brother Jeffrey in a car accident, art teacher Sierra has a dream in which Jeffrey is raised from the dead by a sinister man in a black suit. It later turns out that this was more than a dream: Jeffrey really has been resurrected, and both Sierra and Jeffrey’s boyfriend Marc catch sight of him around town.

Naturally, however, Jeffrey did not return from the grave without paying a price. He has brought death back with him: his touch causes objects to decay and people to wither and die. Furthermore, Jeffrey is not the only one to be granted deadly abilities. A number of other people in Sierra’s life have undergone weird transformations, and proceed to leave trails of destruction. Sierra and Marc – each blaming each other for Jeffrey’s death – must look beyond their animosity to work out what is going on, and where Sierra’s dream of the mysterious man in the black suit fits into events.

They Kill is a story of destruction that begins on a small scale before spreading like a series of tumbling dominos. Once Sierra and Marc initially spot the resurrected Jeffrey, they cause chaos among pedestrians and traffic as they rush to catch up with him. After that we learn about the extent of Jeffrey’s destructive powers, followed by Sierra’s other acquaintances transforming into death-dealing creatures – by which point, all hell is loose.

All of this would mean little without the novel first establishing a convincing picture of normalcy with a cast of well-drawn characters. Sierra, Jeffrey and Marc are given a detailed backstory leading up to the argument that caused Jeffrey’s fatal car accident, with the two survivors showing a believable mixture of grief, anger, and shared fondness. The supporting characters are similarly well thought-out, each being defined by some oddball trait or another. Most memorably, elderly Randall has the habit of handing out “Chucks” (that is, pennies with smiley-face stickers attached) to random passers-by – a practice that the townspeople find annoying and uncomfortable, with some even speculating that he is a paedophile. In reality, Randall is a well-meaning and somewhat puritanical man, oblivious to the rumours surrounding him.

This is a broad approach to characterisation, admittedly, but one that fits the story: it is precisely these broad traits that define the transformations undertaken by the characters. Sierra’s alcoholic, paranoid neighbour Grace obtains the ability to place people under mind-control by vomiting on them. Stuart, Sierra’s stalking ex-boyfriend, undergoes an “upgrade” that turns him into a cyborg capable of delivering lethal shocks with the encouragement of a female voice in his head. Grace, a right-wing co-worker of Sierra’s who suppresses her sexuality in response to a trauma of her youth, turns into a succubus-like figure who gives off enough pheromones to start orgies wherever she goes, and absorbs the lives and bodies of anyone who submits to her advances. Meanwhile, Randall develops a Mr. Hyde alter ego that embodies the anxieties others feel about him, with a yellow smiley-face for a head and the ability to hurl deadly Chucks, shuriken-fashion.

The novel’s death scenes tend to be graphic but brief, taking place over a few succinct lines (“No one made a sound as smoke began to curl from their ears and nostrils, and their skin began to blacken and char. Eyes popped like eggs on a too-hot griddle and hot viscous fluid splattered onto their faces”). The visceral horror of They Kill arises less from the killings themselves than from the weirdness of the killers: they are like cartoon characters who have invaded the real world, still operating on cartoon logic (of course a man fixated on smiley-face sticker would himself have a smiley-face; of course a stalker ex-boyfriend would turn into a shock-giving cyborg) but able to wreak havoc amongst people who obey more mundane laws, and are unable to reassemble themselves once they come apart.

Presiding over all of this death and destruction is Corliss, the black-suited man who appeared in Sierra’s dream. Corliss fills the same role as the various devil-men who appear in the stories of Stephen King (Randall Flagg et al) by embodying entropy itself. Just as the novel appears to have exhausted the potential of its premise, the climax – in which Sierra finally confronts Corliss – brings with it a revelation that injects just enough new life into the narrative to see it to a conclusion. Balancing emotional resonance with violent absurdism is not easy, but They Kill manages to do so right to the end.