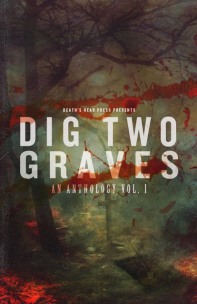 The title says it all, really: each one of the stories in Dig Two Graves involves revenge. How do the assembled writers approach this theme? Read on…

Some of the stories play upon everyday annoyances, as when a sociopathic waiter finds that unpleasant customers are dying one by one in “A Waiter’s Revenge” by Justin Boote. Others are more elaborate and disorienting, as with Feind Gottes’ Saw-esque story “The Forgiven Ghost in Me” in which a man wakes up to find that he has been trapped in a box by an unseen tormenter.

The stories have a varied range of settings. Christine Morgan contributes the historical novelette “Odin’s Eagle”, in which solid characterisation, layers of period detail and brutal violence combine for a gripping story about a teenage Viking and his family seeking vengeance against a rival chieftain. Meanwhile, “Murdock’s Magnificent Emporium” by Sean Seebach is a western-style story set in a post-apocalyptic wasteland, where a snake oil salesman and his companion end up in the sights of some seriously dissatisfied customers.

Some of the narratives are experimental. “Nemesis” by C. Derick Miller is about a woodland family being almost wiped out by a race of strange armoured creatures, leaving a sole survivor to seek revenge; although it has plenty of action and family melodrama to propel it along, the full meaning of the story will not become clear until the killer twist ending. “Eventually Your Demons Take Over” by Mack Moyer, about a man looking for his stolen dog, is a weird allegory of the self-destructiveness of revenge: during the course of the story, the man’s transformation into a monster segues from the figurative to the literal.

One of the most common (and controversial) forms of revenge narrative in horror and exploitation is the rape-revenge story, and Dig Two Graves delivers a varied batch of tales on this theme. DJ Tyrer ‘s “The Six O’Clock” is a very MeToo-era story, about a woman hunting down and punishing the abuser who drove her sister to suicide. “Make” by J. C. Raye, drawing upon Vietnamese folklore, is about a twelve-year-old girl who faces unwanted attention from bullies and sexual predators before obtaining a supernatural means of fighting back. “Steadfast Shadowsong” by Matthew R. Davis uses musical genres as an aesthetic setting for its revenge narrative, with a country-rock bar receiving a surprise visit from a Goth girl who turns out to have a dark history with the local barman. Meanwhile, Dani Brown’s “Visions in Blue” is a story of revenge-seeking sexbots that uses disjointed, surreal prose to examine sexual predation in society.

Many great works of literature have been based on the theme of revenge, and a few of the authors in Dig Two Graves pay homage to these past masters. “Shakespeare Said a Thing” by Andy Rauch cribs a famous scene from the Bard, albeit updated to a world of tech entrepreneurship. Helen Mihajlovic’s “Circe – The Witch’s Curse” heads back even further for inspiration, retelling Hyginus’ narrative of the love triangle between Circe, Glaucus and Scylla. The most engaging of the anthology’s tribute stories is Duncan Ralston’s “Head”, which reads like a crazed modernisation of Poe. A hitman boards an aeroplane with a bowling bag containing the severed head of his latest contract; he is able to keep his cool, until the telltale head starts talking to him.

Moving from literature to religion, we find a number of stories concerned with devilry and black magic. “An Angel in the Basement” by Pedro Iniguez depicts Lucifer seeking revenge on the bigoted religious fundamentalist who keeps him captive. In “The Shakes” by Kenzie Jennings, a woman turns to the dark arts to get back at an unfaithful boyfriend; the story feels like a sort of occult Bridget Jones until its genuinely horrible ending, when the black magic turns out to have an inevitable catch. “Samantha” by Jeremy Megargee starts as a gross-out, bodily function-obsessed narrative about the abduction of a grotesque drug addict – and then takes a supernatural twist, with the addict turning out to be a pawn in a demonic plot.

“Lifting the Weight” by Ali Abbas is an interesting urban fantasy adventure that uses revenge not merely as a character motivation, but as an integral aspect of its worldbuilding. The protagonist is a demon compelled along a moral path by a bodily weight that grows when they commit an evil act, but lessens when they do good. This turns out to be more complicated than it sounds: for example, the story depicts taking money from criminals as a morally neutral act, as the money could be used to do good. “Lifting the Weight” could easily use the basis for a longer-form piece of writing.

In some cases, the role that revenge plays in a story will not be clear until the very end. Ken Goldman’s “Cooter” uses revenge as a twist in a story about a family disrupted by the rivalry between a faithful dog and a monstrous new baby, while “The Maiden of Underbank” by Lee H Jones deploys the theme as a dark conclusion to a tale of two fisherman visiting a place filled with strange local legends. Daniel L. Naden ‘s “Last Word” follows a reporter as he interviews a man who somehow survived having his throat slit and his heart and lungs torn open by a bullet; only after we have spent some time in this strange scenario do we learn that the man’s story is one of a curse and revenge.

Jeannie Warner’s “The Fishwife”, set in a well-realised rural coastline community, involves a fisherman returning to his wife after disappearing for two months, his coarseness replaced with politeness and romantic passion. The story hints that he is some sort of ghost – but the eventual explanation turns out to be stranger still. In “Little Black Book Turns Red” by Robert Essig, a retired biker looks back on his life and the lovers he’s outlived; his ex-partners eventually come back to him, but not in the way he’d have preferred.

Thomas S. Gunther’s “A Little Respect” is about a man with the magical ability to create almost anything he desires out of thin air to suit his immediate purposes: if an ice-cream van outside annoys him, he need only conjure up a gun to shoot it. But his life has one limit: he still lives with his domineering mother. Behind its Twilight Zone-esque fantasy concept, the story is a study of bullying, and how the bullied seek revenge.

An entire anthology of stories about revenge could easily have become repetitive and formulaic, but Dig Two Graves avoids this. Instead, it offers a well-curated and varied selection of stories, filled with elaborate schemes, brutal punishments and darkly humorous twists.