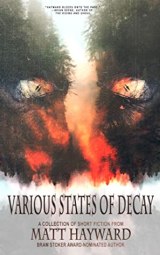 Note: I posted this review before it was widespread knowledge that author Matt Hayward was a harasser (see here and here for background). My comments on his book should in no way be taken as an endorsement of his behaviour.

Here we have a story collection that thrives on the idea that things are not always as they seem, in which high strangeness lurks between cracks in the everyday. This theme can be found across the individual stories, but it is also evident in the collection itself. What initially seems like a set of conventional horror tales turns out to be something more oddball and idiosyncratic.

To start with the comparatively familiar, Hayward shows that he is unafraid to homage past masters. “Where the Wild Winds Blow” reads like a sort of inebriated Poe story: a drink-driver hits a homeless man and is haunted by guilt as he tries to get back to his girlfriend. “Mutt” is a take on the Dorian Gray theme, its main character a boy from a broken home who moves to a new house with his mother, where he adopts a stray puppy; years pass, the mother develops health problems, but the dog remains a frisky young pup.

“The Call of the Children” explores Cronenbergian body horror. A boy hears from the local bullies that his missing brother has been found; he follows them to an abandoned house, only to find that his brother and the bullies are controlled by a strange slug-like creature. “Comes with the Rain” covers similar ground, the main character finding his dog weirdly drained and dehydrated by some sort of leech – which can also affect humans.

Some of the stories use settings created by other writers. “Dark Stage” was written for the Welcome to the Show anthology, in which all the stories involved a cursed bar; Hayward depicts a strange, ghoulish visitor taking the stage in an open mic night. Meanwhile, “Bangers and Mash” has J. F. Gonzales’ Clickers arriving in Northern Ireland, where they become a sought-after delicacy.

Hayward’s protagonists have a habit of running into weird creatures from folklore. In “She Sells Seashells” a reporter goes to investigate a missing swimmer, only to encounter a siren. “Rodent in the Red Room” is the story of an investigator who infiltrates a brothel in a small, inbred Irish town, and finds that the proprietor is a legendary Fear Dearg – a being that transforms from a human to a giant rat. “More Will Follow” depicts a violent dispute between survivors in a post-apocalyptic world ravaged by “Eaters”, which may or may not be zombies, while the motif of the fast zombie is the basis of “In the Pines” – which also deals with parental guilt and a twisted re-interpretation of Christmas iconography.

Zombies, scary folklore, body horror – at this point, readers might get the impression that Hayward is content with sticking to tradition. This is far from the case, however, as the author clearly delights in teasing and misleading his readers with strangeness that somehow always manages to grow deeper.

A good example of this is the story “Alisha”. This starts with a pair of housemates are visited at one in the morning by a friend, who announces that he has got a girl tied up at home. At first, the reader is just as bewildered as the protagonist: why did the man tie the girl up? Why is he so cheerfully telling his friends about his apparent crime? Then, roughly half-way through, the story revea;s the girl is levitating: the friend bound her not to hold her captive, but to stop her from drifting away. This raises still more questions, which are answered only when the story pulls its own reality apart.

One of Hayward’s favourite themes is of high strangeness turning up in seemingly mundane settings. The non-horror story “An Unusual Pet” is a good example, its reporter protagonist visiting a man who turns out to have a pet triceratops – leaving the reporter with the dilemma of whether or not to expose this scientific discovery to the world, shattering the man’s peaceful life in the process. “The Conductor” is more unsettling: a stressed-out businesswoman catches a train to work, finding herself alone in the carriage’s weirdly gaudy interior. Looking around, her only companions turn out to be corpses – and the announcement of the impending arrival of a ticket collector takes on the tone of a threat.

“Things Found in Couches” introduces a setting where a mildly odd scenario becomes increasingly weird. Two workers in a second-hand furniture shop are tasked with dealing with a strange couch that smells of fish. The first mystery is where the couch came from; the second mystery is the origin of a weird six-eyed fish that the men find inside; the third mystery comes into play when one of the two men manages to climb inside the fishy couch, never to be seen again. We are all familiar with odd objects turning up down the back of the sofa; Hayward imagines an entire portal-world tucked away down there.

The collection tries, with almost compulsive repetition, to evoke the feeling of reality itself breaking down. Sometimes this is achieved through narrative tricks: in “I’d Rather Go Blind” what initially seem to be the reminiscences of a bereaved husband take a more bizarre turn. Other times it is through an event occurring in the universe of the story. “Intercepting Isle Nine” involves a company that – according to a conspiracy theorist – has found a way of recording and analysing dreams, allowing it to hide subliminal adverts into a cure for insomnia – leading to much paranoia on the part of the protagonist.

A recurring form of the paranoia theme involves characters finding reality clashing with their personal memories, as though they – or those around them – have been replaced with imposters. “Happiness Inc.” is about a man who is convinced that his wallpaper has changed colour, while his wife insists it was always that way. Soon, other details – a painting on the wall, his wife’s clothes, even the man’s own reflection – begin to conflict with his memories, for reasons hinted at in the story’s title. In “Knock, Knock” a mysterious visitor – a representative of a strange religious sect – takes the place of the main character, whose wife promptly forgets him and embraces her new husband as though they had long been married. “Spread”, which begins with an engaged woman finding a lump on her thigh after a night of adultery, ends with a similar scenario of replacement.

The collection closes with “Father’s Day”, still another variation on the theme of rewritten reality. A man with a troubled marriage recovers from a drunken fuzzily-remembered bender to find himself in his Sunday suit and his house filled with strange objects. The reason soon becomes clear – and, unusually for a Matt Hayward protagonist, he reaches a happy ending.

In her foreword to Various States of Decay, Kelli Owen coins the term “conveyer belt story” to describe a typical Matt Hayward tale. This is a fitting phrase, capturing Hayward’s ability to keep on tugging the reader along, adding a new layer of strangeness each time. One mystery will blur into another, still more surreal mystery; one crack in reality will lead to a new reality with even more fractures. Hayward’s central skill as a storyteller is his ability to conjure up a solid world, throw in a tiny bit of weirdness or a small touch of paranoia, and let things evolve to their logical conclusion from there.