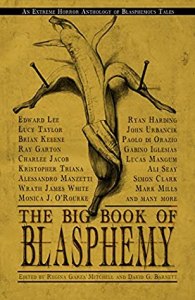 Published in Necro’s Big Book of Blasphemy (which is up for Best Anthology) “Norwegian Woods” is set within Norway’s black metal scene. Its main character is a musician who styles himself Maggotis, and who forms one quarter of a band called Pesta’s Reign. Notorious after a (botched) arson attempt on a cathedral, the band eagerly soaks up the diabolical imagery and anti-Christian extremism that are part and parcel of Norwegian black metal.

The frontman of Pesta’s Reign, Vredesbyrd, is keen to take things further and has begun to act as something of a cult leader. While Maggotis remains uncertain , the other two members – Blakengard and Lord Rectum – have fallen under Vredesbyrd’s sway. To the band leader, devilish iconography is more than just an aesthetic: through a sacrificial rite involving goats and groupies, he is able to tap into supernatural forces of the darkest stripe.

“Norwegian Woods” makes a point out of portraying the squalor behind the corpse-painted theatrics of the metal scene. The infamous band is ultimately just four youngsters having trouble making ends meet, with Maggotis washing dishes in a kebab restaurant, driving a battered twenty-year-old car and sleeping on a couch after being kicked out by his mum. Then, having stripped away the mystique of metal, the story promptly proceeds to build it up again.

END_OF_DOCUMENT_TOKEN_TO_BE_REPLACED

KillerCon Austin’s Splatterpunk Awards for extreme horror fiction have been running since 2018, and each year I’ve made a point out of reviewing every single nominee because that’s the sort of person I am. In 2018 I ran the reviews at WWAC (part 1, part 2, part 3) and last year I ran them at Horror After Dark, a website that is sadly no longer active (although you can still find my reviews at Archive.org: short stories, novellas, collections, anthologies and novels).

This year, I’ve decided to post the reviews at this very blog. So, watch this space and you’ll see me get stuck into another round of gut-splattering grue…

Here are the contenders, in case you missed them:

END_OF_DOCUMENT_TOKEN_TO_BE_REPLACED

Over at Killer Horror Critic I’ve wrapped up my Blind Dead retrospective with a look at the fourth and final film in the series, Night of the Seagulls. Take a look!