If, like me, you spent a significant portion of your formative years poring over dubiously-sourced books about paranormal phenomena, then certain images will be permanently burned into your memory: stills from the Patterson-Gimlin Bigfoot film, the Surgeon’s Photograph of Nessie, a few Adamski flying saucers… and, perhaps, a severed limb with its charred stump lying in a heap of ashy human remains. Ah, yes. Spontaneous human combustion.

SHC is another topic introduced in the second issue of The Unexplained, the beloved 1980s paranormal partwork, with Fortean Times founder Bob Rickard showing us through the smouldering remains of his subject matter. The first instalment of Rickard’s three-part series, “Ashes to Ashes”, begins by pointing out that the basic idea of spontaneous human combustion stretches back into antiquity, even mentioned in the Bible: “By the blast of God they perish, and by the breath of his nostrils are they consumed.” Rickard goes on to mention Dickens’ depiction of SHC in Bleak House, and suggests that this scene was inspired by the fates of Countess Bandi and Grace Pett, who suffered mysterious fiery deaths in the eighteenth century. 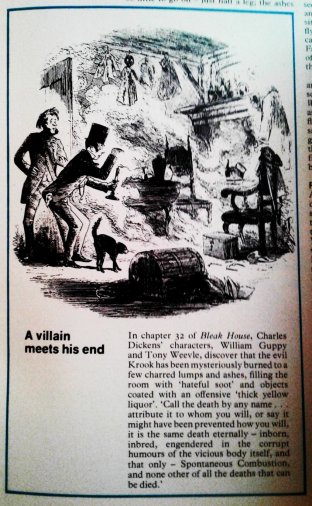 Aftr this, the article covers the more up-to-date incident of Dr. J. Irving Bentley’s death in 1966. The poor fellow perished in his bathroom, leaving only a pile of ash and a leg burnt off at the calf; the iconic photograph of this scene is naturally included in the article. Bentley’s death was officially attributed to careless smoking, although ten years later Pursuit journal ran an article by Larry E. Arnold pointing to flaws in this explanation. As Rickard summarises:

Bentley’s pipe had been ‘carefully placed’ on its stand by his chair; not the action of a man on fire. A broken hip six years before had left him with no feeling in his left leg, and he walked with difficulty – his ‘walker’ can be seen fallen across the hole. He was enough of a doctor to realise that his only chance of survival, had his clothes been on fire, would be to take them off there and then, rather than risk the precarious trip to the bathroom.

Giving due credit to Charles Fort, Rickard touches upon more cases of apparent SHC. He cites an incident in 1905 involving an unnamed woman who burst into flames after falling asleep in front of a fireplace; to the coroner’s bewilderment, although she had her front to the fire, her back bore the worst burns. Next is the 1908 case of Wilhelmina Dewar, whose sister Margaret was dismissed as a drunkard after claiming to have found her charred body in a room that otherwise showed no signs of fire.

Rickard then goes on to list notable investigators in the field of spontaneous human combustion: eighteenth-century doctor Le Cat, who published a memoir on the topic after looking into the mysterious burning of an innkeeper’s wife; Baron Justus von Liebig, who investigated the subject and concluded that SHC is a superstition; Dr. Wilton Krogman, who conducted experiments with crematorium equipment in an effort to understand the mechanics of SHC; Dr. B. H. Hartwell, who claimed to have seen a woman having caught fire with no apparent cause in 1890; a French surgeon named Merille, who investigated the strange burning of a woman named Mademoiselle Thaurs; and Dr. D. J. Gee, who in turn is quoted as citing anecdotes from Dr. George Manning and Dr. David Price.

The article series continues in issue 3, with “A Strange Unnatural Fire”. Here, Bob Rickard brings up more cases of apparent SHC including the blazing death of Italian priest named Bertholi in 1789; the strange passing of an elderly man investigated by Dr. J. Mackenzie Booth in 1888; the unexplained buring five unnamed people in a car near Pikeville, Kentucky in 1960, described by Ron Willis in INFO Journal issue 8; and a case from 1905 involving an unnamed woman (apparently distinct from the 1905 case involving an unnaed woman seen in the previous article) who ended up as “a small pyramidal heap of broken calcinnated human bones, on the top of which was a skull”.

Returning to Charles Fort, Rickard cites the cases of Thomas Cochrane in 1904,the Kiley couple in 1905; a woman from Manner near Dinapore in 1907, and a servant girl who fell victim to one of a spate of mysterious fires at Binbrook Farm over the winter of 1904-5, but who was rescued from the flames. In an image caption, the article quotes Fort’s personal theory on such phenomena: “I think our data relate not to ‘spontaneous combustion of human bodies; but to things or beings that with a flaming process consume men and women, but like werewolves or alleged werewolves, mostly pick women.” Rickard also heads back to the research of Wilton M. Krogman, namely the cases of Mary Reeser and Leon Eveille. 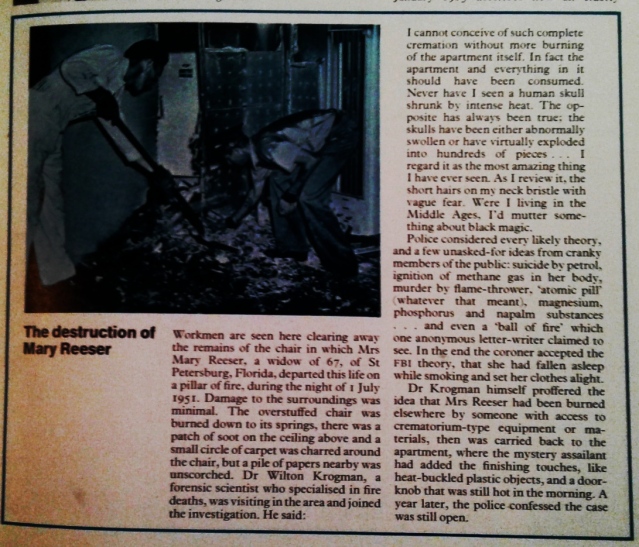 Perhaps most bizarre of the accounts cited in the article is a double-tragedy from 1885, again from Ron Willis, in which a man named Patrick Rooney apparently suffocated after inhaling smoke from his spontaneously combusting wife.
While collating these incidents, Rickard points out commonalties between them. The fires appear to have spread very quickly (“Some writers deduce that the fire develops with particular rapidity from the fact that the victims are often discovered still sitting calmly, as though nothing had happened”). The heat is intense (“Under normal circumstances the human body is very hard to set alight, especially if still alive, and people who die in fires usually sustain only partial or superficial damage to the body”) but also confined (“Charred bodies are found lying in unscorched beds, sitting on slightly singed chairs, or with their clothing intact”). The victims seem to make little or no effort to escape their fate, and survivors of SHC – like Elizabeth Clark, victim of another 1905 incident – struggle to describe what happened to them (“some psychic or psychological component of the phenomenon prefaces or accompanies the burning”).

The article also touches on hypothetical cases of the phenomenon. A box headed “fuelling the human fireball” raises the possibility of SHC stemming from a disease that causes the body to produce gases, which then combust when in contact with oxygen; but Rickard dismisses this theory: “gases within the body tissues suggested would be fatally toxic, and the victim would have been gravely ill and dead. And generally there are no such symptoms”. Rickard then cites a theory put forth by Vincent Gaddis and Ivan Sanderson that the combustion is fuelled by a build-up of bodily phosphagens – but as Rickard points out, if this is the fuel, there would still need to be a source of ignition.

At the end of the article Rickard discusses the provocative notion that SHC is a form of “psychic suicide… in which victims combust because they have given up on life.” He recounts the cases of Billy Peterson in 1959 and Glen Denney in 1952, each of whom attempted suicide through mundane means prior to combusting.

This musing over the causes of SHC leads into the third and final part of the series, published in issue 5: “Mysteries of the Human Bonfire”. Here, Rickard brings in still more cases, including the deaths of Phyllis Newcombe in 1938, “Mrs. E. M.” in 1958 and an unnamed 85-year-old woman in 1963, the latter two cases being illustrated with photographs of the victims’ remains. But this time around, instead of listing incidents of flaming deaths, the main focus of the article is on coming up with a possible explanation. Past efforts, Rickard argues, have been coloured by an antiquated sense of moralism:

[I]n the middle of the 19th century, a typical SHC victim was thought to be almost certainly a drinker and a smoker, most likely an elderly, solitary, corpulent woman of sedentary habits. Alcohol was both the physical and the moral cause of conflagration. Horrific tales circulated about divine punishment for inebriation, in which the lambent and inextinguishable flames were but a foretaste of he everlasting hellfire to come. Boineau, a French priest, reported the 1749 case of an 80-year-old woman reduced to a carbonised skeleton as she sat sipping brandy. As Baron Justus bon Liebig noted sarcastically, ‘The chair, which of course had not sinned, did not burn.’

In response, Rickard points to research by both the aforementioned von Liebig and Dr. D. J. Gee indicating that there is no relation between bodily combustion and either alcohol consumption or excess body fat.

The article runs through some other theories that have been proffered over the years. In one case from 1943, a woman named Madge Knight woke up in agony with extensive burns across her back, dying in hospital weeks later; a specialist who observed her noted the lack of burn marks on the surrounding sheets and suggested that a corrosive liquid was responsible – yet no signs of either corrosive chemical nor container were found. Rickard also returns to the theory of “psychic suicide”, this time citing observations by Charles Fort, Vincent Gaddis and Michael Harrison of the low emotional states shared by many SHC victims, although Rickard concludes that an emotional origin of SHC is both highly conjectural and would not account for every case.

The article later brings up the topic of ball lightning, citing a case described by the Reverend Winogene Savage in 1961 in which a man saw a strange fireball hovering above the bod of his combusting wife, As Rickard points out, the book Taming of the Thundebolts by Maxwell Cade and Delphine Davis notes a degree of overlap between reports of ball lightning and SHC cases. Taking this further, the article ties SHC to geomagnetic readings:

Perhaps the most fruitful clue to the nature of the phenomenon came in 1975, with Livingstone Gearhart’s article in the Fortean journal Pursuit. He had discovered that a significant number of the cases took place on or near a peak in the geomagnetic flux. The strength of the Earth’s magnetic field rises and falls quite dramatically in relation to solar activity. Global averages of the daily figures are gathered for astronomers and geophysicists, and these show a distinct correlation between the incidence of SHC and high geomagnetic readings. This seems to indicate that SHC may be the result of a very complex chain of events, in which there is an interaction between certain astronomical conditions and the state of an individual’s body.

These thoughts are accompanied by a series of charts examining geomagnetic readings during six SHC cases. 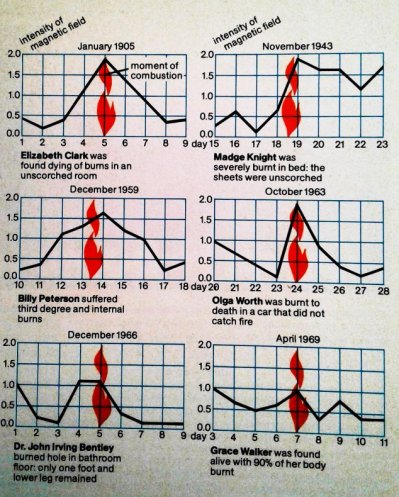 Of course, all of this is mere speculation, as Rickard acknowledges. But then, The Unexplained — like Charles Fort before it – never promised to provide conclusive solutions to the weird events it covers.