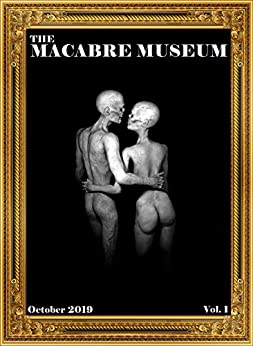 Published in the debut issue of The Macabre Museum, “Shoulder Pain” is a second-person story that places the reader headlong into a zombie apocalypse. But any preconceptions about the zombie genre can be set aside, as author Chandler Morrison makes a concerted effort to strip away all macho romanticism and antisocial wish-fulfilment:

You weren’t prepared for this.
The movies, the video–games, the television shows…they’d led you to believe that it would be different. That it wouldn’t be so dreadful. That, maybe, it would even be fun.
You imagined yourself lingering up headshots with ease. Hacking off necrotic limbs without breaking a sweat. Cruising down abandoned highways on a big, roaring motorcycle. You weren’t prepared for the bugs in your hair. Bugs that have gotten so big you could name them. Bugs that you can’t wash out because you haven’t bathed in weeks.
Nor were you prepared for the smell.

The story starts out by establishing exactly what it feels like to live in a world overrun by the walking dead: the sensations, the tension, the pain and discomfort necessary for basic acts of survival (the title “Shoulder Pain” refers to the result of hefting and firing a large gun).

The protagonist – the “you” of the narrative – is a twenty-year-old college dropout whose life of smoking pot and working at Subway was torn apart by the zombie outbreak. His companions are an elderly man, tougher than he looks; a gun-toting biker, not as tough as he looks; and a middle-aged woman, the product of upper-middle-class privilege, whose snootiness is mingled with sadism.

“Shoulder Pain” contains the token bout of zombie-blasting action, but this is not the main focus. After it has established the tactility and atmosphere of its setting, the story moves to the relationships between the survivors. While the unnamed characters are not especially deep they are vivid, each of the protagonist’s three companions being an inverted stereotype with an element of unpredictability about them.

In one scene, the young hero delivers a speech about how his generation has been let down. “All of this is your fucking fault”, he tells his comrades. “You know why? Because people like you didn’t prepare people like me for this shit. It was people like you who gave my generation stuff like The Walking Dead and Resident Evil and Army of Darkness. You made it look fun and easy. You didn’t tell us it would be like this.”

The others offer characteristic responses to this outburst. The elderly man complains about how the youth are always complaining. The biker, who prefers to stay away from trouble despite his hard-guy image, points out that none of those present were ever writers or directors. The haughty woman protests that she was indeed a writer – an important one, she claims – but not the sort of writer who wrote horror stories. Perish the thought.

But just as “Shoulder Pain” has started to slip into comedy, the story has one last twist to offer when the characters meet more survivors, one of them a thirteen-year-old girl. The band (which, lest we forget, includes “you”) is faced with a choice: they can help her, they can abandon her, or they can exploit her. Just as it has torn away the romance of the zombie genre, “Shoulder Pain” tears away any hope that the reader might have for a triumph of humanity.

A searing example of how a short piece of fiction can tick all of the boxes of a crowd-pleasing genre and still have something insightful to say.