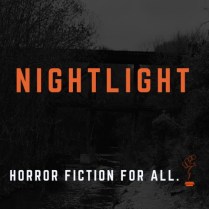 Here we have a first for the Splatterpunk Awards: an audio-only nominee. Donyae Coles’ story “Breaking the Waters” was read by Cherrae Stuart for a joint episode of the podcasts Nightlight and Pseudopod, the latter celebrating its 666th instalment, and can be heard here.

The story begins with a young woman named Bootsie being approached by a man with no face, clad in a pristine white suit. He claims to have known her deceased mother, and makes a strange offer. “This is our proposition”, he says; “you let us impregnate you, use your womb, and track your dreams. Before the thing sinks its tentacles into you, we’ll get rid of it. Everything will be taken care of. You just have to open your legs. You can do that, can’t you, Bootsie?” She is uncertain, but the faceless man makes it clear that he will pay little attention to a refusal: “You can say no but the answer is still the same. The asking is a formality.”

Over the course of three nights, Bootsie submits to the man with no face. She subsequently becomes pregnant, and is visited by a faceless man outwardly identical to the first – although she concludes that he is “a different man, exactly the same but completely different.” He announces that he and his vaguely-defined associates will keep an eye on Bootsie’s dreams “until the beast comes, until she blesses us with the waters of her birth, the milk of her many-titted chest.”

“Breaking the Waters” captures that dreamlike feeling where the inexplicable becomes an accepted fact of reality: when confronted by the faceless man, Bootsie is unnerved but also unsurprised. Many questions are left unanswered, from the matter of whether there are one or several faceless men to the precise involvement of Bootsie’s parents (she is given conflicting and ambiguous information on this subject throughout the story). The actual dream sequences, depicting a girl undergoing a monstrous birth, are separated from Bootsie’s waking life only in that she herself does not feature as a character – the unnamed girl who appears in the nightmares presumably being her mother.

Having conjured up its intangible dreamscape, the story only adding to the overall surrealism when it visits more mundane settings. After her ordeal with the faceless man, the narrative follows the pregnant Bootsie to her apartment as she gets ready for work; she accepts that she has nobody to talk to about her experience, being apparently the only person who can see the man with no face. She later visits an abortion clinic, the point at which the story gets closest to everyday human society:

The clinic was crowded. All these girls and their mistakes. Some were older than her:, women, but still girls, because only girls were dumb enough to get knocked up by accident. Girls like her. […] Some of their clothes were nicer, but they all had faces in shades of brown. White girls didn’t come here. They just had accidents: oops. This was the clinic for bad choices.

Beginning as it does with a female protagonist being manipulated into rape by a male character, and then proceeding to an analysis of race, class and gender dynamics at an abortion clinic, it would have been easy for “Breaking the Waters” to descend into obvious allegory. Instead, it performs a delicate tightrope walk over that pitfall, every threatened stumble transformed into still another acrobatic feat.
By the end of the story, Bootsie has ridden a River Styx formed from television static into a mythic underworld. Here, she encounters the monstrous mother goddess, a being spread-legged, many-breasted, swollen-stomached, cloven-footed and bearing a face “too like Bootsie’s own”. A descent into hell, or the culmination of spiritual growth? Perhaps both? Throughout the story the listener is invited to either unpack every piece of symbolism as they go along, or else to sit back and let the streams of mythic imagery and sexual anxiety wash freely into their subconscious.

As a final note, Donnyae Coles’ writing finds a perfect complement in Cherrae Stuart’s reading. Particularly commendable is the vocal characterisation that Stuart gives to the man with no face: he speaks with the flashy good cheer of a game-show host, the sort of character who can tell the impregnated Bootsie “if you survive this one, we may even use you again” as though he considers this a rare privilege.