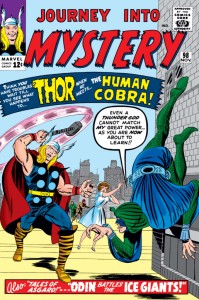 Time for another issue of Journey Into Mystery, with two more stories: one another of Thor’s latter-day superheroic adventures, the other a retelling of a Norse myth…

“Challenged by the Human Cobra!” opens with Thor smashing up his office in a tantrum over Jane Foster leaving him in the last issue (“Even a thunder god can go on the rampage! Even the mighty Thor can lash out in a fit of uncontrollable temper! Perhaps you never thought of superheroes possessing the all-too-human qualities of jealousy, frustration, and violent anger! But Thor has emotions, even as you and I!”) He’s apparently noisy enough for Asgard to hear, as Odin calls him over for advice: “Put all thoughts of the human Jane Foster from out of thy mind! Forget her! Else, you will never know peace!”

Back in his mortal guise as Don Blake, out hero heads back to his office – which, rather oddly, has a sculpture that looks remarkably like the head of a grey alien, an image that wouldn’t be cemented in the cultural imagination until Whitley Strieber’s Communion came out in 1987. Meanwhile, trouble’s brewing somewhere in India: Klaus, assistant to the esteemed Professor Shecktor, feels disgruntled at his job and hatches a plan to kill his boss using a cobra.

Thor hears of the professor’s fatal turn (“My old teacher! The man they call the Albert Schweitzer of India! It can’t be!”) and decides to investigate. The dying professor explains to Thor how his murderous assistant was also bitten by the cobra, and used an antidote to cure himself. However, the villain now has strange new abilities – as the cobra was radioactive! And so, the evildoer has taken to wearing a funky costume and calling himself the Cobra. 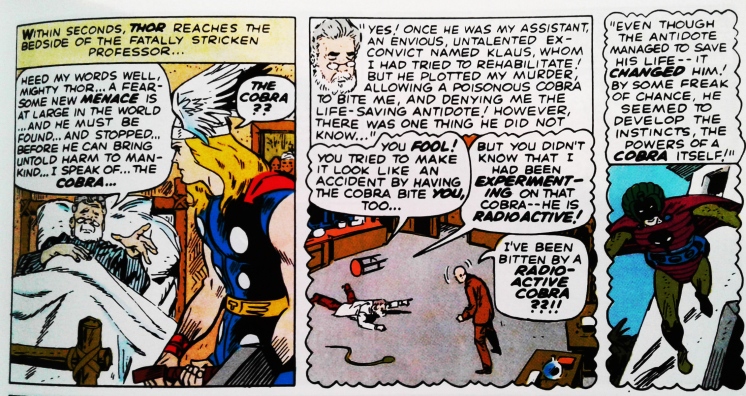 Yes, mythological back-up stories aside, we’re still very much in superheroville. Ever since Spider-Man, “bitten by a radioactive _____” has been a go-to choice for origin stories in superhero parodies; here we have a comparatively rare example o the plot device being played straight.

The Cobra heads to America, where he menaces  Jane Foster and her new partner Dr. Andrews. Jane shows a bit of agency in this story, chucking a bottle through a window to get the attention of the passing Thor, but Dr. Andrews proves himself to be a coward. Once the Cobra is dealt with by Thor, Jane walks out on the lily-livered Andrews, thus clearing up this two-issue love triangle.

After this by-the-book superhero yarn, we turn to the comic’s second stab at retelling actual Norse myths with “Tales of Asgard”. The previous issue introduced us to the frost giant Ymir; now, “Odin Battles Ymir, King of the Ice Giants” tells us the story of that character’s defeat at the hands of Odin. 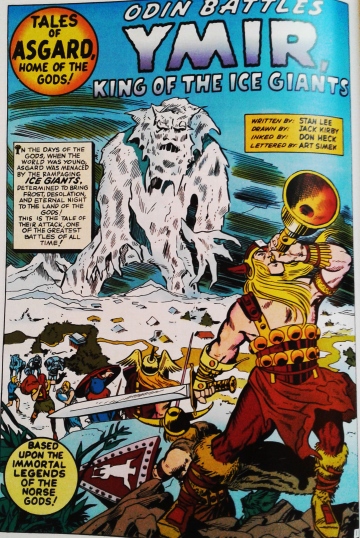 There’s a problem, however. The Prose Edda goes into almost no detail about this conflict, stating simply that “the sons of Bor slew the giant Ymir”. The Poetic Edda is similarly tight-lipped. So, Stan Lee and Jack Kirby had to fall back on their imaginations in turning this one-sentence narrative into a five-page comic story.

“In the days of the gods, when the world was young, Asgard was menaced by the rampaging ice giants, determined to bring frost, desolation and eternal night to the land of the gods!” begins the story. “This is the tale of their attack, one of the greatest battles of all time!” The accompanying illustration shows a band of generic Norse deities fleeing a giant made of ice (presumably Ymir himself). The story then turns to a castle located “on the highest peak of the tallest mount in all of Asgard” where Odin hears a call to battle against the ice giants.

This doesn’t really tally up with the myths, where the present events are placed in a primordial universe freshly formed from ice and fire. Here’s how the Poetic Edda (as translated by Andy Orchard) describes the scene:

It was early in ages when Ymir made his home,
there was neither sand not sea, not cooling waves;
no earth to be found, not heaven above:
a gulf beguiling, nor grass anywhere.

The comic identifies Odin as the “lord of the gods” but, going by the Eddas, there wouldn’t really have been many gods for him to b lord of: the only other divinities at this point would have been his brothers Vili and Ve (who appeared in the previous issue but not here) and possibly his father Bor and grandfather Buri, although the myths never divulge exactly what happened to those two after Odin was born. 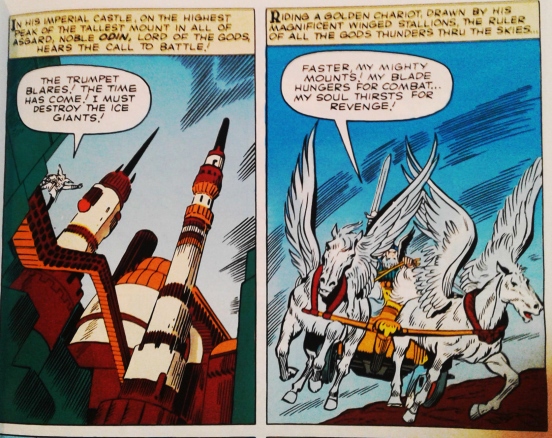 Odin rides into battle in a chariot, which is pulled by a pair of winged horses. This image is clearly an interpolation from Greek mythology: Odin’s mythological steed is a eight-legged but wingless horse named Sleipnir. (That said, Sleipnir – as the son of Loki – wouldn’t have been born at this point… but then, presumably, no horses of any sort would exist at this stage in the universe’s creation).

The battle gets fierce. “Summoning the awesome forces of nature to his behest, the monarch of Asgard hurls mighty meteor bolts at the fearsome frigid behemoths who are menacing his domain!” But Odin is able to defeat most of the ice giants by splitting open a chasm, causing them to fall down “where the demons of Surtur wait greedily below to make them prisoners for all time!” 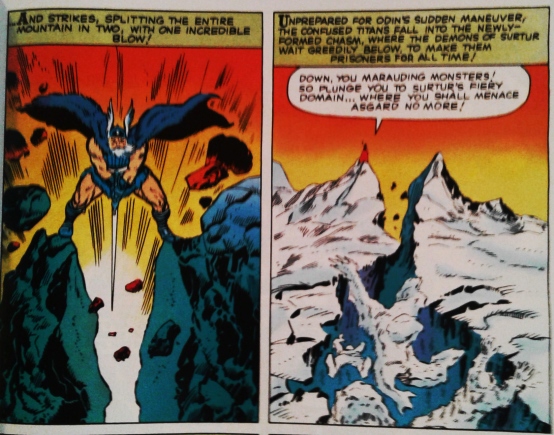 The only survivor of this attack is Ymir, the giants’ king. Odin has a near miss when the giant chucks a giant icicle at him, but he is finally able to trap Ymir in a circle of fire. “And so Ymir, last of the dreaded ice giants, becomes an eternal prisoner on that barren post, surrounded by a wall he can never penetrate!”

This conclusion flies in the face of the actual myths. There, Ymir wasn’t the last of the frost giants:

The sons of Bor slew the giant Ymir, but when he fell, there flowed so much blood from his wounds that they drowned therein the whole race of frost giants; excepting one, who escaped with his household. Him the giants call Bergelmer. He and his wife went on board his ark and saved themselves in it. From them are come new races of frost-giants…

Moreover, Ymir’s fate wasn’t to be trapped in a ring of fire; it was to be killed and dismembered so that the Earth could be created from his body parts:

They took the body of Ymir, carried it into the midst of Ginungagap and made of him the earth. Of his blood they made the seas and lakes; of his flesh the earth was made, but of his bones the rocks; of his teeth and jaws, and of the bones that were broken, they made stones and pebbles… Of the blood that flowed from the wounds, and was free, they made the ocean; they fastened the earth together and around it they laid this ocean in a ring without, and it must seem to most men impossible to cross it… They took his skull and made thereof the sky, and raised it over the earth with four sides. Under each corner they set a dwarf, and the four dwarfs were called Austre (east), Vestre (West), Nordre (North), Sudre (South).

But then, bear in mind that Marvel’s versions of the myths had to fit into the established Marvel universe. The Earth inhabited by Thor is the same Earth inhabited by the likes of Spider-Man and the X-Men, and putting those pseudo-scientific heroes in a world formed by gods from the body of a slain giant is awkward. (The idea of the world being made from Ymir’s body would also clash with the comic’s portrayal of Ymir and the other frost giants as being literally made of ice: anything made from this guy’s eyebrows would melt pretty quickly).

The comic’s invented punishments for the giants – getting thrown into a fiery chasm or trapped in a flaming ring for eternity – have a distinctly Christianised flavour, recalling the prophesised fate of Satan in Revelation. This, coupled with Odin’s Pegasus-derived steeds, makes it clear that what we’re seeing here is not so much a retelling of the Norse stories but a mythic mash-up, taking the trappings of the Eddas and mixing them in with influences from other texts — including the modern mythology of superhero comics.