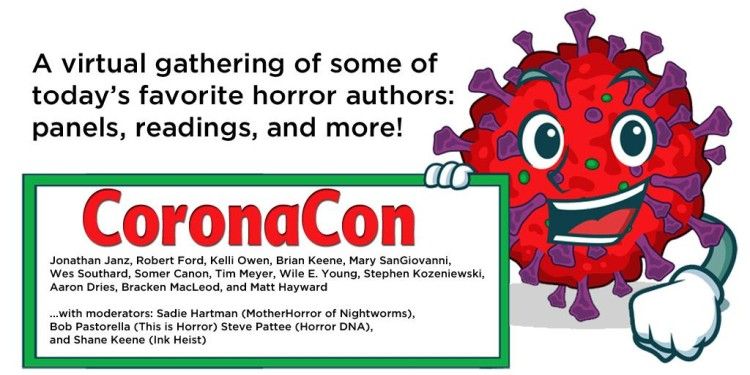 I’ve often found myself thinking about how the horror genre fares in times of cultural anxiety. Do audiences stay away from imaginary horror when they’re surrounded by the real thing? Or, conversely, do they head to the safely-confined thrills – ones that will end when the book is closed or the TV turned off – for catharsis? There are anecdotes you could employ either way. World War II wasn’t a particularly fruitful period for horror in either film or literature; but on the other hand, 9/11 saw a renaissance for the genre, with zombie apocalypses in particularly high demand.

It remains to be seen what lasting impact the coronavirus crisis will have on the imaginations of horror creators, but we’ve already seen the genre and its community trying to adapt to the practical matters of survival in this time of quarantine.

While StokerCon UK was one of many conventions cancelled this year, the Bram Stoker Awards were presented in a virtual show. Winners included Owl Goingback’s novel Coyote Rage, Sarah Read’s debut The Bone Weaver’s Orchid, Neil Gaiman and Colleen Doran’s graphic novel Snow, Glass, Apples, Paul Tremblay’s collection Growing Things and Other Stories and Victor LaValle’s novelette “Up from Slavery”. Gwendolyn Kiste managed to win in two categories thanks to her short story “The Eight People Who Murdered Me (Excerpt from Lucy Westenra’s Diary)” and her essay “Magic, Madness, and Women Who Creep: The Power of Individuality in the Work of Charlotte Perkins Gilman”, the latter of which became the winner of the first ever Bram Stoker Award for Superior Achievement in Short Non-Fiction.

Also occurring in cyberspace was Coronacon 2020, in which Kelli Owen presided over a seven-hour videothon  in which a range of horror writers and reviewers conducted readings and took part in long-distance panel discussions.

On a more controversial note, Charles Band’s Full Moon Features put out an entire movie called Corona Zombies. I haven’t watched it, but judging by the trailer and reviews, it’s made of footage from older zombie films (I recognised Zombie Creeping Flesh in there, and apparently something called Zombies vs Strippers turns up in the mix) dubbed over and with some new scenes added to tell a story of Wuhan bat soup turning people into zombies.

The film sparked quite a bit of debate, with some objecting to the tastelessness of making a comedy-horror out of a disaster that’s killing people by the tens of thousands, while others point to horror and exploitation cinema’s long tradition of tastelessness and to the role that gallows humour has in times of crisis. Personally, I’m struggling to see how this joke could possibly sustain an entire feature (even a relatively short feature, clocking in at one hour). A gag trailer on YouTube, maybe, but an hour? Hmm.

Well, say what you will about the horror crew, we’re clearly an adaptable lot. No matter what May brings, it’s safe to say that we’ll find a way to give our chains a good old rattling.