It’s been a while since I blogged about the legendary 1980s partwork magazine The Unexplained, but dipping back into it seems a good way to spend my quarantining period. I’ve already covered the first issue, so let’s crack open the second…

As well as continuing the series on extra-sensory perception and mysterious man-beasts that started in the first issue, The Unexplained #2 introduces a few new topics. One of these is hypnosis, which is covered in “The Power of Suggestion” by former Spectator editor Brian Inglis.

“Most people still think of hypnotists as slightly shady characters practising a highly dubious craft”, begins Inglis. “We see in our mind’s eye the evil Svengali, the character in George du Maurier’s novel… Today’s stage hypnotist, however, is no longer the seedy villain of the story. He is a well-dressed and well-heeled smoothie with the patter of a conjurer, who exercised his talent before audiences in clubs.”

Inglis goes on to play up the mysterious aspects of the topic (“There is not, as yet, any clear explanation of the nature of hypnotism”) before giving a run-down of what happens during a typical session of stage hypnosis. “Watching people behave in this way – and often, to the amusement of the audience, making fools of themselves – appears to demonstrate the hypnotist’s powers”, he observes. “But this is an illusion. The powers really lie in the hypnotised subjects. And these powers are far greater and potentially far more valuable than is generally realised”.

The article describes the research of Franz Mesmer and his associates, who reportedly found that hypnosis could be used as a form of anaesthetic (Inglis pours scorn on the medical establishment that rejected this) and that their subjects began showing talents, such as singing, that they lacked outside of a trance state. The article repeats as fact the disputed claim that a subject can suffer burns if they are hypnotised to believe that they are touching red-hot metal, and heads into still stranger territory: “A few appeared to become clairvoyant, describing places or events that they could not have seen. This, too, was dismissed as occultism.” 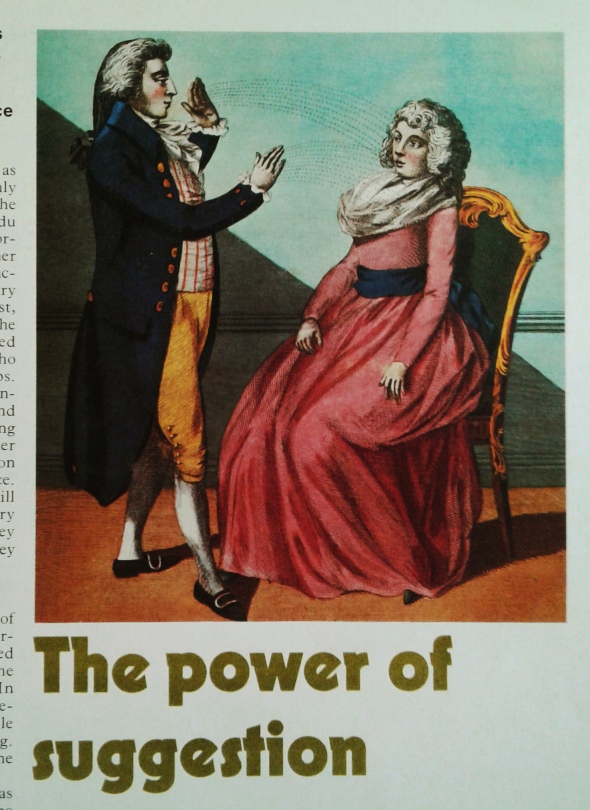 Inglis then moves on to the topic of hypnotic regression, in which a subject supposedly recalls past events. This includes the controversial topic of hypnotically-recovered memories of events from before the subject was born; the sources cited by Inglis are Jeffrey Iverson’s More Lives than One and Joe Keeton’s Encounters with the Past. “It remains to be established whether the hypnotised subjects are regressing to their own past lives,” says Inglis, “or turning in to what might be described as a videotape from the collective unconscious, but it seems clear they are genuine; the material, even if not accurate in detail, is being picked up from sources other than books and conversations.” Either way, he seems convinced that this dubious phenomenon is genuine.

The article wraps up by bemoaning the shady reputation of hypnosis in the popular imagination and making a case for its medical uses, pointing to research into hypnotherapy by Ainslie Meares and O. Carl and Stephanie Simonton. The article’s choices of illustrations are curiously at odds with Inglis’  message, however:  save for a nineteenth-century depiction of hypnosis being used as a dental anaesthetic by Jean-Victor Oudet, none portray hypnosis in a particularly positive light. The images depict a stage charlatan with a stooge to masquerading as a hypnotised audience member, a still from the 1954 film version of Svengali, an eighteenth-century illustration of a man waving his hands about in front of a woman (he is “supposedly projecting magnetisms from the palms of his hands”) and a photo of Dr. Malcolm Rawson questioning a hypnotised teenager in an (ultimately futile) attempt to solve a disappearance.

Intentionally or not, the choice of illustrations add a little balance to an article that is otherwise skewed heavily in favour of hypnosis as a legitimate science. Inglis objects to the scientific establishment dismissing the field, but never goes into detail about why claims regarding hypnosis are widely dismissed – namely, a lack of verifiable data from controlled research. But then, having already written multiple books promoting alternative medicine, he knew what side his bread was buttered.

Brian Inglis’ piece leads into a series of articles in subsequent issues in which David Christie-Murray discusses hypnosis specifically in relation to memories of past lives. Given the change in author and the shift in tone, I’ll be leaving those for later.