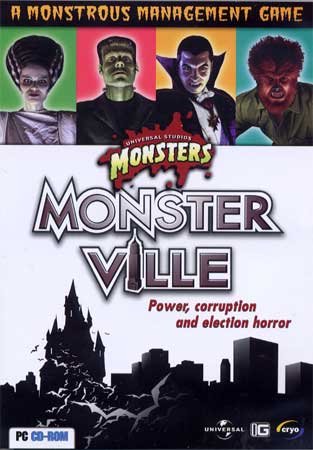 I was browsing a charity shop and noticed, among the DVDs, a Windows game from 2002 called Monsterville. I can’t say I’m much of a gamer these days, but how could I resist a game where one of the playable characters is the Metaluna Mutant from This Island Earth? You bet I plonked down my £1.

The object of the game is to rampage through a Transylvanian village, competing with other monsters to chase down peasants and take control of buildings. The four mains are Dracula, Frankenstein, Quasimodo and Metaluna, who each have their own strengths and weaknesses. If you’ve taken over a chunk of the village and want to keep Dracula off your turf, you can put up a few crosses. If it’s Frankenstein you’re worried about, lighting some torches should keep him at bay. Quasimodo — never noted for body-positivity — stays away from mirrors, while the Metaluna Mutant is scared of clocks, presumably because they remind him of his homeworld’s impending destruction or something.

Sounds straightforward, but here’s where things get quirky: the game’s mechanics were clearly derived from a town management sim, which leads to a situation where you have to shamble about hunting down peasants while simultaneously building infrastructure.

This sounds bizarre on paper, but in gameplay terms it makes sense — the more houses you construct, the more peasants you can feed on. In what would obviously have been a taxation/donation system in a more vanilla management sim, hassling villagers will earn you “resources” that you can use to put up new buildings or take over existing structures. Amusingly, each monster has their own currency: Dracula has a blood-count, for example, while Metaluna trades in brains (and makes a Maggie Simpson sucking noise while he’s going about his business, no less).

As well as the four main monsters, the game includes four secondary creatures in the Bride of Frankenstein, the Mummy, the Creature from the Black Lagoon and the Mole Man, one of whom will appear in each mission (the Wolf Man seems to be absent, despite being featured on the cover art — sorry, Chaney Jr. fans). The Bride is an NPC who periodically pops up and saunters around, causing any monsters who get to close to become temporarily paralysed with desire. The other three monsters can be “hired”: once you take control of their pyramid/boat house/mine shaft, you can switch between them and your main monster.

It’s also possible to hire minions who serve a similar purpose, if you can cough up enough resources to build a home for them. Each monster has their own variety of minion: Dracula gets Nosferatu-looking fellows, Frankenstein has zombies (loosely modelled on Michael Jackson in Thriller), Quasimodo has dancing Romani women and Metaluna gets odd chaps who look like crosses between himself and a grey alien.

Once the time limit is up, an “election” takes place (complete with a rosette for each monster) and whoever has the smallest chunk of the village gets booted out before the next round begins. The game makes a loose attempt to present all of this as political satire — the slogan on the box is “power, corruption and election horror” — but really, it feels more like a case of slap-things-together-and-hope-they-work. On the whole, it works pretty well.

I suspect that hardened fans of town management sims will find Monsterville a bit simple and repetitive; this is the sort of title which, today, would be a free-to-play mobile game. Still, it’s a solid time-killer, and there’s amusement to be had in sending the estranged offspring of Bram Stoker, Mary Shelley, Victor Hugo and Raymond F. Jones on the campaign trail. 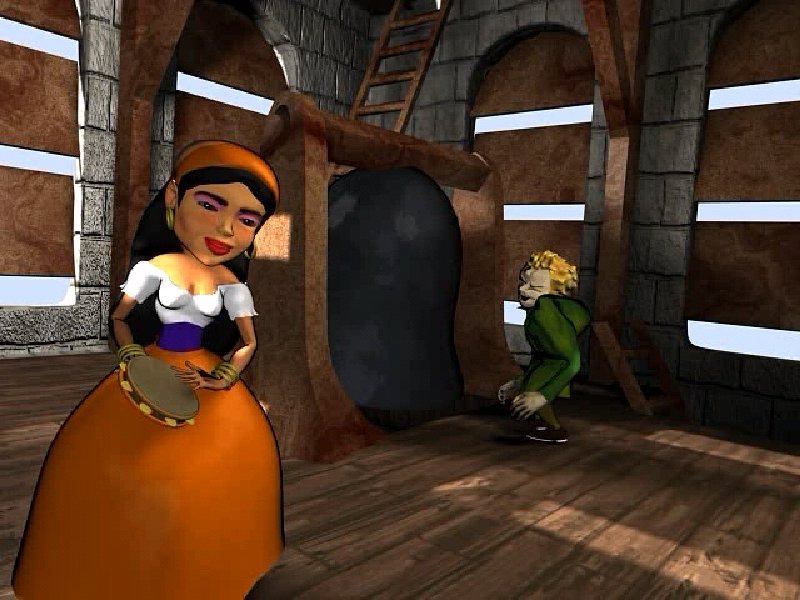 Sadly, developer Cryo Interactive apparently went defunct shortly after the game’s release, so don’t get your hopes up for Monsterville 2: The Impeachment of Hjalmar Poelzig.