Greetings! It’s time for another trip back in time to see what the Norse god of thunder was up to in the 1960s, thanks to the Marvel Bullpen transforming this ancient heathen deity into a four-colour hero for the kids. This time I’ve got a two-in-one, starting with the story in the September 1963 issue of Journey Into Mystery:  “Defying the Magic of… Mad Merlin!” As its title suggests, this tale pits Thor against a character from a different body of legend…

The story begins with Don Blake returning to his surgery after saving a bus as Thor – only to get scolded by Jane Foster for running out while fluoroscoping a patient. Such are the woes that come with keeping a secret identity.

Then the radio blurts out a bulletin: the tomb of Merlin – yes, that Merlin – is being transported to Washington. “Merlin? I thought he was just a legend!” exclaims Jane. “But if they’ve discovered his crypt, he must have really existed! I wonder if Merlin used his magic for good… or evil?” 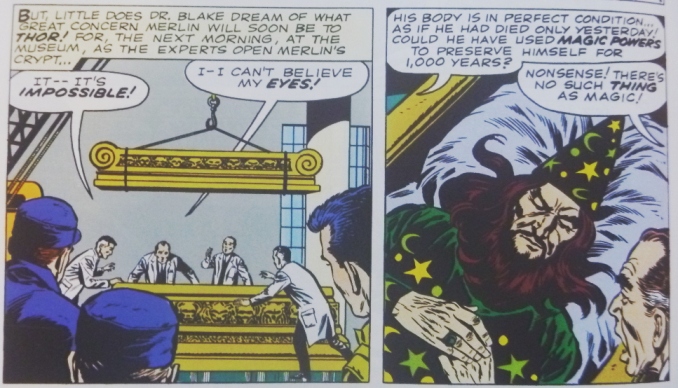 Meanwhile, Merlin’s tomb is opened, revealing him to be perfectly preserved. Somewhat implausibly the scientists and security guards present all rush off to discuss the implications of this, leaving the wizard- who was actually in suspended animation, you see – to get up and walk off.

Merlin then begins gloating about his time in Camelot, when he tricked Arthur and co into thinking he had magical gifts. “I used witch’s brews and other weirdly dramatic effects only to impress them! It was I who possessed the powers, not the smelly soups I brewed! Not only did I possess telepathy… but unique powers of levitation!”

…wait, hold on, if Merlin isn’t a real wizard, how come he has powers of telepathy and levitation? The answer is simple: Merlin is a mutant.

For context, this story was published the same month as the debut issue of X-Men. That comic had introduced the mutants to the Marvel universe, and along with them the idea of superhumans who obtain powers through an accident of birth rather than the more traditional process of radiation mishaps. Tying the X-mutants to Merlin seems an odd direction to take the concept in, however, given that the comic is able to portray the Norse gods without pseudo-scientific explanations.

As a show of his power, Merlin disrupts a missile launch. Thor sees this and suspects Loki – but the imprisoned god of naughtiness informs him of the real culprit. Back on Midgard, Merlin ups his game by heading to the White House (“I shall now de-materialize and introduce myself to the president!”) only to walk right past Kennedy, who he dismisses as too young to be the Commander in Chief.

Thor turns up in time to intervene, and the two have a battle between the monuments of Capital City. Merlin lobs the Washington Monument at Thor like a javelin (“I could shatter it with my hammer, but I dare not atomize a national shrine!”), tries to squash him under the Pentagon, and finally brings the Lincoln statue to life.

Thor eventually defeats Merlin with a bluff of his own: he turns into Dr. Blake, and boasts that this is just one aspect f his fearsome shapeshifting ability. Merlin, not so wise after all, falls for this ruse and agrees to go back into suspended animation in his crypt. 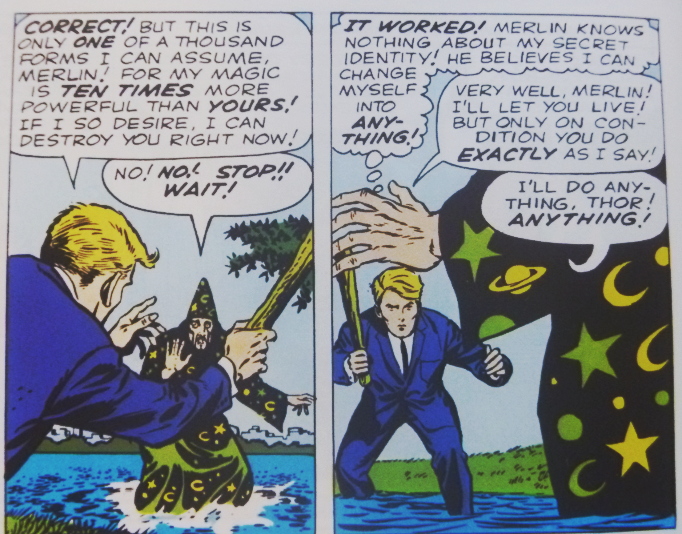 This wasn’t the end, as Merlin would later return — although later stories would retcon is history so that he is revealed to be not the real Merlin, but rather an immortal named Maha Yogi impersonating the legendary wiz.

Thor’s curiously indirect encounter with the X-mythos wasn’t his only superhero crossover that month; far from it, as the newsstands were also hit by the very first issue of The Avengers, in which Thor formed an alliance that was to prove rather more profitable.

Uses Loki as an antagonist – indeed, the comic’s first page takes us to his Asgardian prison. Once again Loki’s keeping an eye on earth, plotting his revenge; this time his plan is to find some sort of menace he can use against Thor. Lo and behold, his search leads him to none other than the Incredible Hulk.

“Although there is no evil in his heart, mankind fears him because of his awesome strength! He shall be the perfect foil for me!” Loki projects the image of an explosive onto a nearby railway trestle, tricking the Hulk into destroying it and consequently being branded a villain by the public.

Rick Jones and his Teen Brigade (side characters from Hulk) try to alert the Fantastic Four about this development, but Loki redirects their radio message to Thor’s alter ego Don Blake. His plan backfires somewhat, however, as the message reaches not only Thor but also Iron Man, Ant-Man and the Wasp (the last of whom turns out to have the hots for Thor, allowing for some comic relief banter)

Thor sees the Hulk and chases after him… only for the Hulk to vanish into thin air, at which point Thor realises that he was chasing one of Loki’s illusions and runs back to Asgard.

The Asgardians disappear from the narrative, while the other three heroes chase Hulk down to a circus, where he’s pretending to be a robot named Mechano. As you do.

After this, the action turns to Asgard, where Thor embarks on a journey to the “Isle of Silence” where Loki is trapped – this is clearly a disreputable place, as Thor has to ask permission from Odin before he goes there.

Contrasting with the typical superheroic shenanigans going on down below, Thor’s Asgardian adventure is a thing of fairytale fantasy. As he rows across marshy waters, he is menaced first by tentacle-like roots (“Tangle roots! Dreaded scourge of the swamps!”) and then by a volcano which spews forth not lava but “volcanic gas globules… capable of sapping the strength of any god” (okay, that part is more like conventional silver-age superhero fare).

Thor eventually reaches Loki, and the two engage in a short elemental battle – Thor creating a vast waterspout, Loki protecting himself with a shield of ice. Then Loki reveals that he has another trick up his sleeve: “Stop, accursed brother! Do you remember the name of this isle… and the ones for whom it was named? The silent ones, who live below! The natural enemies of the gods! …the trolls!”

Ah, yes, the troll — a folkloric category so flexible as to span everything from Moomins to some jerk on Twitter. Thor’s enmity towards trolls is attested in the Prose Edda, portions of which describe him fighting trolls in the East so as to explain his absence from the present narrative. “It is from them that the Earth legend of the ‘old man of the sea’ was born!” says Loki. An “old man of the sea” is mentioned in both the Odyssey and the Arabian Nights, but equating either of them with these cave-dwelling Scandinavian chaps seems curious.

The trolls emerge from the ground and try to pull Thor back down with them, but he drives them away with a lightning flash (“the sensitive eyes of a troll, used to dwelling in semi-darkness, cannot bear it!”). The trolls return to the “stygian depths”, a term that again evokes Greek rather than Norse mythology (…if anyone’s taking notes.)

Loki then tries to trick Thor by creating illusory duplicates of himself, and even attempts to jump off a cliff to evade capture, but Thor apprehends him with magnetism (“Note how I rub my enchanted hammer along the ground, soaking up the strong flow of magnetic currents that give life to the trolls below”)

Back on Earth, Iron Man’s battle with the Hulk is brought to an end when Thor pops on down with the real culprit, Loki. The latter god suddenly starts glowing (“He’s made himself radioactive” proclaims Iron Man, signifying that we’ve left the land of myth and returned to the pseudoscience of superheroics) but then falls down a trapdoor. Ant-Man, with the aid of a swarm of ants, has activated a trap – allowing Loki to be safely sealed in a lead-lined tank.

And so wraps up the first adventure of the Avengers. The Thor mythos has already had a sizeable influence on the series, furnishing not only one of the protagonists but also the first villain and the monsters-of-the-month in the shape of the trolls. Join me later as I follow not only Thor’s own series, but also his occasional appearance in other Marvel titles…