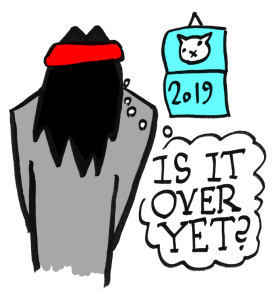 It was a bit anticlimactic, really. After months of work on the first draft of my novel, the creative process ended with a Microsoft Word spellcheck as I picked out weird typos and misplaced commas. Oh, well; the manuscript is now in the ends of my editor, and I should hopefully be able to make an official announcement before long. Suffice to say that it’s a tie-in for a TV series; and not Doctor Who, this time. Now it’s dusted off, I’ll have more time to work on my personal novel — I’m hoping to get it to at least 35,000 words by the end of the year.

And my first book came out on Halloween, but that already seems like an aeon ago. It’s about The Mummy (the original 1932 version with Boris Karloff) and examines the literary and cultural roots of the film; you can learn more about it here.

Right, then, with just one month left of the decade, I’m going to try and squeeze in as much writing as possible. Wish me luck…

Article topics for December and beyond: