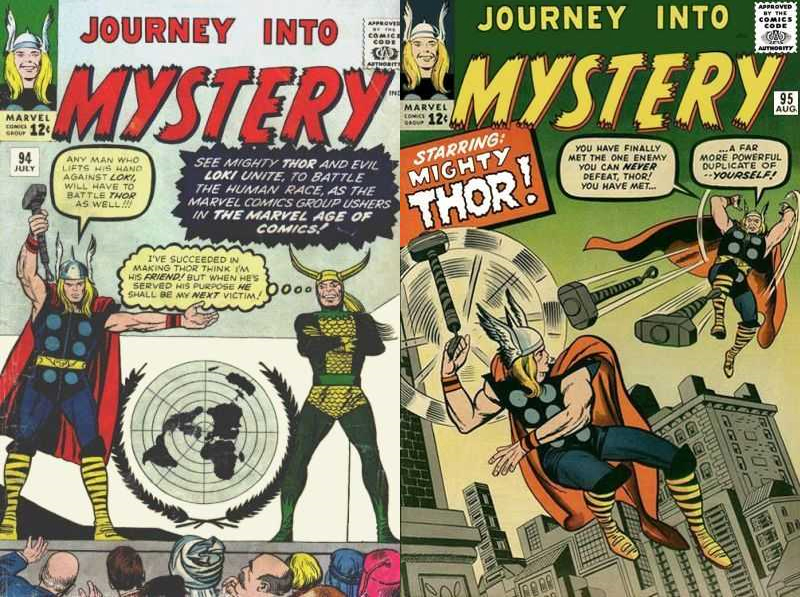 One enemy that every superhero worth their salt must someday confront is… themself. No, I’m not talking psychology here (although you can interpret things along those lines if you like), I’m talking about one of the oldest and most resilient concepts in the superhero genre: that of the hero’s evil counterpart. Sometimes the evil version of the hero is a separate entity, like a doppelganger; other times they are a different personality within the same body, like Mr. Hyde. Either way, they’re an idea that you can expect to turn up in any given superhero comic — and Marvel’s Thor series managed to cover both varieties across two consecutive issues roughly a year into its run.

First off, let’s look at Journey Into Mystery #94, with the irresistibly-titled “Thor and Loki Attack the Human Race!” The tale opens with a US test nuke going out of control, and governments around the world calling on – who else – the God of Thunder to destroy it before it lands.

Thor, hearing the message, gets in touch with the Pentagon via telephone. I’m reminded of that scene in Douglas Adams’ The Salmon of Doubt:

The phone was ringing. Dirk answered it. He sighed. It was Thor, the ancient Norse God of Thunder. Dirk knew immediately it was him from the long, portentous silence and the low grumblings of irritation followed by strange, distant bawling noises. Thor did not understand phones very well. He would usually stand ten feet away and shout godlike commands at them.

It turns out that the missile incident was no mere mishap: it was the trickery of Loki, still able to influence world affairs from his prison (a bit of brick wall on a cliff in Asgard). When Thor hurls his hammer to destroy the missile, Loki distracts him by creating the illusion of a dragon – causing the hammer to bonk right into Thor’s head on its return.

Then we get one of those strange and quite lovely mixtures of mythology and pseudoscience that have come to characterise Marvel’s Thor adventures. According to Loki, the hammer hit Thor in “his chromosomatic gland, which determines and changes personality”. This is accompanied by a diagram of a human head, albeit one that oddly fails to specify where the chromosomatic gland is.

His personality altered from good to bad, our former hero is now susceptible to Loki’s mental suggestions. The trickster compels Thor to visit Asgard, where he rudely pushes Heimdall to the ground upon entrance (“Out of my way, you flunky!”) before freeing Loki.

The other gods are outraged (“how could you, of all persons, free Loki, the evil one?”) but Thor won’t listen. He even takes a swipe at Odin, although the latter is forgiving: “Thor is bewitched! He knows not what he does!” exclaims Thor’s father, in a contextually bizarre Biblical allusion.

Loki wants to conquer Asgard – but he knows that, even with Thor on his side, the other gods will be formidable opponents. So, he announces a scheme to hold Earth hostage, laying waste to the planet until Odin surrenders. “Villain!! Have you no pity for the helpless humans you may injure?” asks Odin. 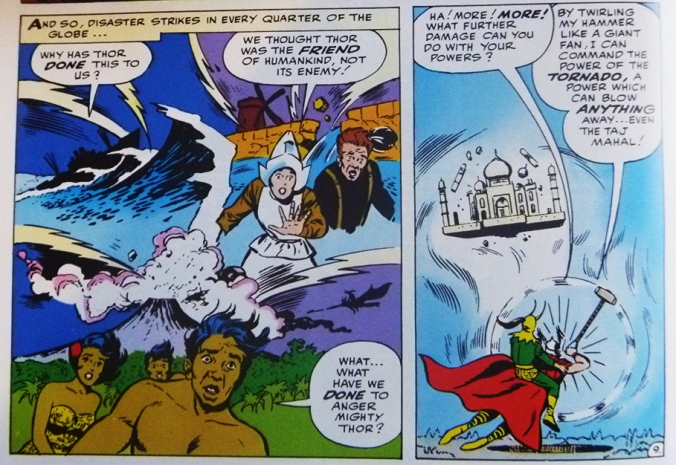 The next sequence is great – it’s just Thor and Loki using their respective powers to smash up Earth. Thor uses his brute strength to topple famous monuments in best Kaiju tradition…

…while Loki, as a trickster, is a little more inventive. He turns a whale into a sea serpent, brings the sphinx to life on a rampage through Cairo and resurrects a fossilised dinosaur. (He also makes the Empire State Building wobble a bit, but that’s pretty feeble by comparison)

A United Nations committee approaches the two gods, inviting them to the UN building to witness the formal surrender of Earth. Rather strangely, they agree that the best way for Thor to contact the omnipotent Odin is to smash the UN seal.

But this turns out to be a trap: upon breaking the seal, Thor falls through a trapdoor and loses control of his hammer… which, hovering in the air, gives him another bonk on the chromosomal gland. 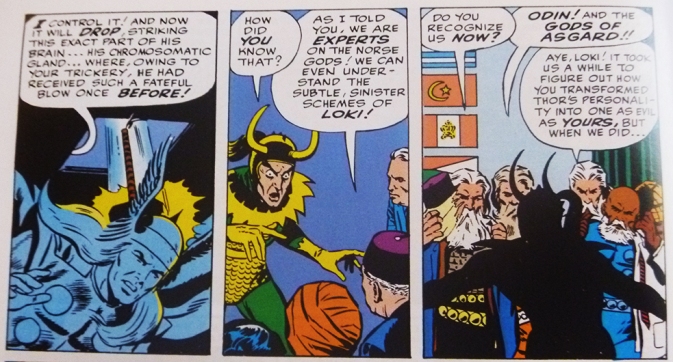 Who could have taken control of Mjolnir? Well, it turns out that the UN committee were not mere mortals: they were gods in disguise, and they know a thing or two about chromosomal glands. (Notice that one of the gods is a dark-skinned chap who wears a turban for his disguise: evidence of ethnic diversity on Asgard decades before Idris Elba was cast as Hemidall? Or perhaps he’s just wearing blackface)

Thor apprehends Loki, and then promises to team up with the other gods to repair all the damage his did to Earth. “And the memory of these events shall be erased from the minds of men”, says Odin, who is apparently concerned about celestial PR.

Next we have Journey into Mystery #95 and “The Demon Duplicators!” where Thor goes up against an evil clone. Now, I hear you yawning: yes, evil twins are old hat in superhero comics. Yet, this issue manages to be the single oddest Mighty Thor story that I’ve covered so far. Read on…

After quickly solving an Asgardian drought, Thor arrives to help demonstrate an android that he built in his mortal guise as Dr. Don Blake. “Dr. Blake’s fantastic anatomical knowledge enabled him to construct this synthetic creature down to its last cell”, declares theoretical physicist Professor Zaxton, who hosts the demonstration. Introduced as a mere surgeon, Dr. Blake has clearly evolved into the sort of superhero-comic scientist who is capable of coming up with any invention the story requires: as well as being made from “impenetrable plastic tissue” strong enough to withstand a blow from Thor’s hammer, the android is artificially intelligent, boasting an IQ of 375 and an ability to solve “the world’s most complicated mathematical problem”.

But then, disaster strikes. “Zaxton’s hand must’ve slipped and twisted all the dials at once!” exclaims the android, who is now poised to blow at any minute: “when I explode, my skin will disintegrate like shrapnel!”

Thor is forced to lob the android into the sky, allowing it to explode harmlessly (well, harmlessly to everyone but itself, anyway). As he transforms back into Dr. Blake, our hero ponders this turn of events: did Professor Zaxton deliberately sabotage the automaton…?

Now, on first reading this issue, I figured that Zaxton would rebuild the android as Thor’s double. But no: the automaton  is never mentioned again during the course of the story. Instead, we move on to Zaxton revealing a new invention: a duplicating machine, capable of cloning inanimate objects (“if I keep pressing the button I can create twelve typewriters within seconds!”)

But he needs Blake’s help in upgrading it so that it can clone human beings. Blake is disgusted – “you can’t tamper with human life!” – but as Zaxton is holding Jane Foster captive, and Thor’s code of honour forbids attacking a human except in self-defence, he has no choice but to go along with the plan. Thanks to Dr. Blake’s tinkering, the machine is now able to clone living creatures, as demonstrated when Zaxton eagerly duplicates a nearby alley cat.

Why does Zaxton want to create clones of people? That’s never explained. Perhaps he hopes to create an army – after all, he did previously talk about mass-producing Blake’s android to create super-soldiers. But hey, since this is a superhero comic, the ramifications of Zaxton’s reality-rewriting invention are confined entirely to the main cast. And so, the next plot twist has Zaxton accidentally cloning Thor. 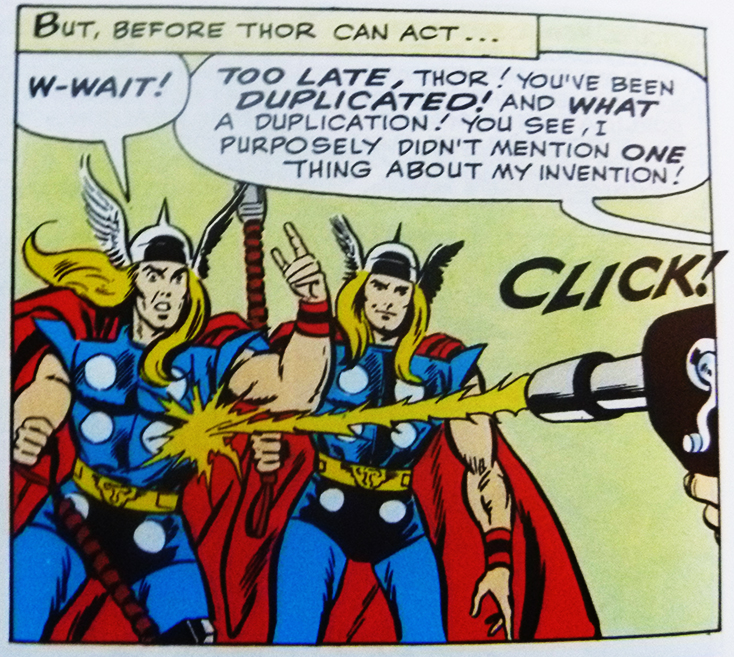 A curious side-effect of the duplication process is that the new Thor is evil (“it creates the opposite of the original’s personality and brains under my telepathic control”, apparently) and the two start fighting. Zaxon decides to weigh the odds by giving evil-Thor an extra hammer.

As the two Thors go hammer-to-hammer, Zaxon helps his side by zapping large objects with the duplicator machine to create obstacles for good-Thor. First, he clones an entire office block; next, he creates several clones of an aircraft in flight, apparently cloning everyone on board at the same time (the implications of this are left unexplored).

Things look grim, until Thor realises that the hammers wielded by his opponent do him no damage. It turns out that the clone, being evil, is unworthy to wield Mjolnir. Spurred on by this knowledge, Thor makes his evil duplicate fade away to nothing with a well-placed hammer blow.

Zaxon, seeing this defeat, clones himself in a last-ditch attempt to confuse Thor. But he fumbles and drops the machine of a bridge, and then falls to his death while trying to retrieve it.

Thor is too slow to save the real Zaxon – but he can take comfort in the fact that the professor is survived by clone-Zaxon, who has a opposite personality and is therefore a hood sort. Thor decides to pass the clone off as the real deal: “I won’t ruin the ‘new’ professor’s reputation! In his new mental state he can become a boon to humanity!”