It’s time for another trip into the history of Marvel’s Thor. This time I’m looking at Journey into Mystery #93, with a story entitled “The Mysterious Radio-Active Man!” Stan Lee and R. Berns are still on writing duty, while Jack Kirby has returned as penciller with Dick Ayers on inks. Also deserving of credit is the issue’s special guest: Chairman Mao!

Cover-dated June 1963, the issue was published mere months after the end of the Sino-Indian War, and opens with a fanciful depiction of this conflict. 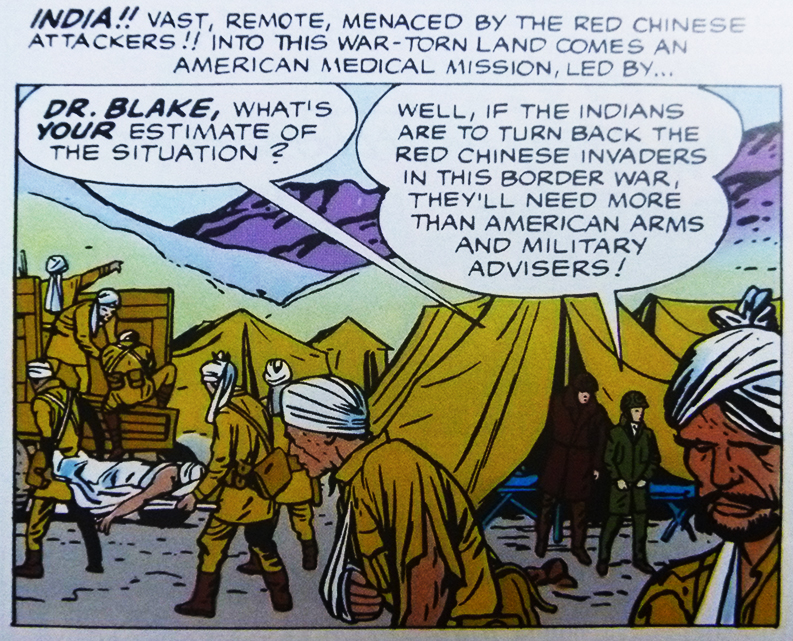 The story begins in India – “vast, remote, menaced by the Red Chinese attackers” – where Thor is helping out, ostensibly by leading an American medical mission in the guise of Dr. Don Blake, while also managing to squeeze in some tank-thwarting duties in his superheroic form. “I could easily destroy the red tanks, but I’d rather deliver them to the Hindus” he remarks, before chaining the vehicles together and loving them at an Indian army camp with his hammer.

As a parting gift, Thor then causes a landslide to prevent any more tanks from arriving, followed by a rainstorm that leaves the army stuck in mud. News of the disaster reaches Peking, and Chairman Mao is most displeased. “Communism is the mightiest force on Earth”, he declares, “and it will destroy even Thor!!”

Now, Mao Zedong isn’t identified by name, but it’s pretty clear who this chap is supposed to be. For context, let’s not forget that mere decades beforehand Hitler was a stock villain in superhero comics; we shouldn’t be too surprised to see a 1960s comic using one of Adolf’s rivals for the noble title of the century’s biggest mass-murderer.

“We can make free men tremble by destroying their hero-protector, Thor”, comments an unnamed official, and scientist Chen Lu steps up to the task. But it seems that this fellow is not particularly faithful to the communist cause: “When I finish my experiments, not only Thor, but the whole world will cower before my invincible power”, he thinks to himself.

Chen Lu’s sinister laboratory is built into a converted Buddhist temple (either crude orientalism or a pointed comment on the Cultural Revolution’s destruction of religious sites, depending on how sympathetic you’re feeling) and staffed by robots resembling traditional Chinese statues (because of cause they do). We learn that he has discovered “how to make a human being super-powerful by subjecting him to sufficient radio-activity to change his entire atomic structure” and decides to use himself as a test subject. 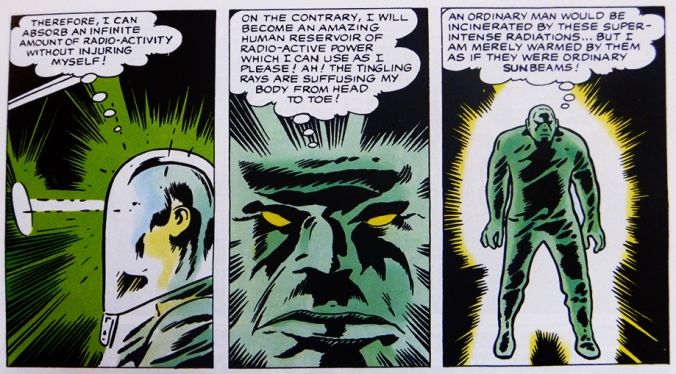 Lo and behold, the experiment is a success! Chen Lu smashes his own laboratory to bits so that his methods can never be recovered, and travels to New York via an unorthodox torpedo-based transport.

There, the Radio-Active Man issues a challenge to Thor, who turns up for battle. But things go badly for our thundery pal: the villain is immune to both Thor’s hammer and his lightning bolts, and boasts that if the hero were to attack him with bare hands, things would end badly for the locals: “My radio-active molecules are so arranged that if I were subjected to any sudden physical violence I would reach critical mass and then… *poof*… I’d blow up like an H-bomb and take the whole city with me!

The villain then pulls out another superpower: that old chestnut of mind-control (“I’ll simply use my radio-active powers to put you into a hypnotic trance!”) With Thor in his thrall, the Radio-Active Man makes our hero toss his mighty hammer away. Alas, this turns out to have been a bad, as Thor lobs the hammer so far away that the Radio-Active Man has to run across town to retrieve it. Meanwhile, Thor turns back into Don Blake and in the process regains consciousness.

Heading back to his office and getting into a brief altercation with Jane Foster, our pipe-chomping chum Don uses an “x-ray type device” to locate his missing hammer.

The hammer turns out to be in the Hudson River under eighty feet of water, necessitating a heroic ordeal for Thor’s mortal alter-ego. But he manages it in the end, and finally sends the Radio-Active man back to China in a tornado – leaving Mao himself cowering from the resultant mushroom cloud.

But this was not the end of the Radio-Active Man: he would go on to become a recurring opponent for Thor along with other heroes. Chairman Mao, meanwhile, became a rather less prominent figure in the Marvel universe as time goes on. With the Chairman ultimately overshadowed by his own henchman, we can definitely chalk up this story as a victory for Thor.