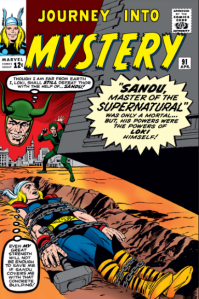 Welcome back to the series where I lark about comparing Marvel’s Thor comics to Norse mythology. I’ve got a little more to get my teeth into this time around, as the next to issues introduce a few more denizens of Asgard to the comic mythos…

Joe Sinott becomes the latest artist to take on Thor’s adventures in the Journey into Mystery #91 story “Sandu, Master of the Supernatural!” This one is an oddly convoluted narrative for a Silver Age comic, with a two-panel prologue that exists solely to set up a Chekhov’s gun (well, a Chekhov’s belt, but we’ll come to that later) followed by a second prologue which turns out to be occurring in medias res.

But the plot underneath all this is straightforward stuff: Loki, still trapped in Asgard, looks down on Earth and notices a promising accomplice in the carnival psychic Sandu. After Loki boosts his preternatural powers, Sandu graduates from reading minds to levitating buildings.

He steals entire banks and jewellery stores, teleporting them to the Moon; next, he makes off with an entire palace, before trying to take over the world by pinching the United Nations building.

Thor tries to thwart him, only to end up trapped under a building. And here’s where the comic once again dips into the well of Norse mythology: Loki calls for help from Odin, who sends two Valkyries to deliver Thor’s belt of strength.

The Prose Edda identifies Thor as having three treasures: his famous hammer; a pair of iron gloves which he needs to wear when he wields said hammer; and the belt Megingjarder, which doubles his strength. The latter two items have largely dropped out of public memory (his belt did turn up as a key plot point in Thunderbolt Jaxon, a British strip created for the Australian market in 1949 — but that’s another story)

Valkyries, of course, are best remembered for their involvement with warfare: the Prose Edda states that “Odin sends them to all battles, where they choose those who are to be slain, and rule over the victory.” But they also served a peaceful purposes. According to the Prose Edda, Valkyries “serve in Valhal, bear the drink around, wait upon the table and pass the ale-horns”. That their first appearance in Journey into Mystery is spent handing Thor his belt is broadly consistent with their lesser-known role as divine serving-maids.

For his final trick, Sandu takes the battle to another dimension. But he then screws up by trying to steal Thor’s hammer; the effort give him a “mental short circuit”, causing him to lose his powers. All of his spells are undone, and Loki is left fuming once more at another thwarted scheme.

The next issue’s story “The Day Loki Stole Thor’s Magic Hammer” (in which R. Berns takes over from Larry Lieber as scripter) opens with the introduction of another Asgardian lady: “Neri, hand-maiden to Fricka, Queen of Asgard”. 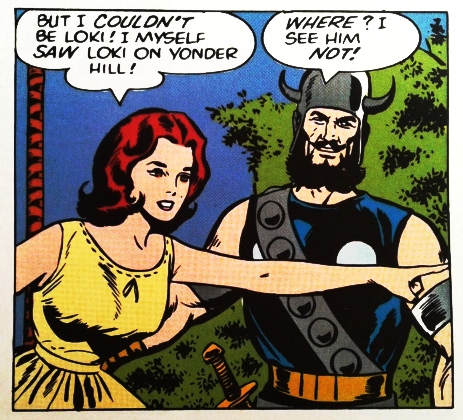 Fricka, more commonly known as Frigg, is the wife of Odin, but Neri appears to be an original creation. The Prose Edda does identify a goddess “whom Frigg sends on her arrands into various worlds”; I suppose this character could broadly be described as a hand-maiden — but her name is Gna, not Neri.

Neri only turns up on the first page; her main role in the story is to point out that Loki is chained to a rock for his misdeeds (in the myths he was bound to a rock by the intestines of his own son). The presence of Neri and reference to Fricka suggest that the new writer was eager to explore the wider Asgardian community.

Meanwhile, Thor is still doing his superhero thang. A group of gangsters turn up at Dr. Blake’s hospital for treatment; Blake does his Hippocratic duty, before turning into Thor and sending the crooks to prison.

Next, in a quite charming sequence, Thor turns up in a film shoot (“Since the proceeds for my contribution will go to various charities, I’m glad to help out!”) His role is to play himself – makes you wonder about Chris Hemsworth.

While Thor duffs up a mechanical sea monster, Loki hatches another scheme. The chains that bind him are made from the same magic “uru metal” as Thor’s hammer; so, when Thor lobs his weapon at a mountain to produce a special effect, Loki uses magnetism to pull it towards his chains, smashing them.

Not only is Loki free, but Thor is now hammerless. Calling on Odin for transport, he heads off on an Asgardian exploit… 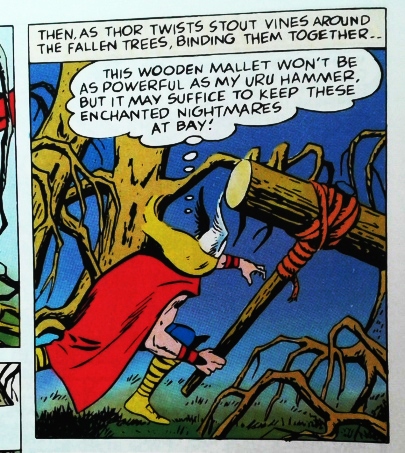 This is the first time the comic actually gave Thor an adventure in his homeland, and the story takes on a distinctly fairy tale flavour. Loki, we find out, owns a forest – after all, in a fairy tale, a forest is the classic location for menace. Loki turns the trees into monsters, but Thor chops them down with his bare hands and makes a replacement hammer from wood.

But as the second little pig learnt the hard way, wood has its limitations. When Loki makes the hammer catch fire, Thor heads to a cliff-face and makes a hammer from stone. At the same time, Loki turns some clouds into “snarling, deadly dragons”.

As chance would have It, Thor’s stone hammer turns out to contain uru, and during the fight it is magnetically tugged towards the location of the original hammer. Thor gets his weapon back, and Loki is apprehended by Odin, Heimdall, Fricka, and some other guy who goes unnamed.

Well, that’s it for our trip to Asgard. The next issue will take things back to Earth as Thor goes up against CHAIRMAN MAO.