The main news for me this month is that I’m officially writing a TV tie-in novel! I’m currently not at liberty to reveal which TV series the novel ties in with, but suffice to say that it’s not Doctor Who this time. I’m aiming to have the first fifth of the draft done and dusted by the end of this week.

In other news… well, with the Hugo Awards approaching, I’m planning to continue my annual tradition of reviewing the prose finalists; on top of that, I’m still getting stuck into the Splatterpunk Award contenders. So, when I wasn’t writing, I spent a pretty big chunk of the month reading.

On top of this, I’ve still been working on getting everything in order for the Midnight Widows crowdfunding campaign; I’ve polished off the promotional film, and once a final bit of additional graphic design is out the way we’ll be ready to roll. It seems fairly safe to say that the campaign will launch in June or, at the latest, July.

Article topics for June and beyond:

Time for some vintage alien invasion mayhem in Invasion 1984, reprinted courtesy of the Treasury of British Comics. Check out my review at WWAC!

It’s that time again! “That time” being about 90 years ago, as my Amazing Stories retrospective reaches May 1928. Take a look, and see how authors imagined futures where mankind was being troubled by giant invertebrates.

The latest instalment of my year-long overview of vampire fiction is live! This time around, I’m looking at Dracula. Yes, I’ve written five articles’ worth of the history of vampire literature, and I’ve only just got up to Bram Stoker.

The post was a little intimidating at first: how much is there left to say about such an oft-dissected book? Well, as it turns out, I was able to look at it with fresh eyes. Most people discussing Dracula compare it with what came afterwards, particularly the various film adaptations; but in my case, having written about vampire fiction from 1818 onwards, I was able to discuss Dracula in terms of what came before. Doing so helped me to see the old favourite in a new light, and I hope my readers find something to appreciate.

Welcome back for another return trip to the legendary 1980s partwork magazine The Unexplained. Having witnessed UFOs, let’s take a look at the second article of the first issue…

“[E]xtra-sensory perception is a fact – but one still shrouded in mystery” is the confident declaration that precedes Roy Stemman article on ESP. The piece opens by introducing us to psychic researcher Stanley Krippner, who claims that when he was fourteen years old he had a sudden conviction that his uncle was dead; moments afterwards, his mother received a telephone call announcing that the uncle in question had passed away. Stemman uses this account to explore three hypothetical varieties of ESP: was it a case of telepathy, Krippner having somehow read the mind of the individual making the telephone call? Was it clairvoyance, the boy having sensed the death without directly communicating with anyone’s mind? Or was it precognition, Krippner having seen into the future and picked up his subsequent conversation with his mother? Stemman also floats a fourth possibility – that the dead uncle’s spirit communicated with Krippner – that belongs more to the study of mediumship and life-after-death than to ESP.

END_OF_DOCUMENT_TOKEN_TO_BE_REPLACED

Welcome back to the series where I lark about comparing Marvel’s Thor comics to Norse mythology. I’ve got a little more to get my teeth into this time around, as the next to issues introduce a few more denizens of Asgard to the comic mythos…

Joe Sinott becomes the latest artist to take on Thor’s adventures in the Journey into Mystery #91 story “Sandu, Master of the Supernatural!” This one is an oddly convoluted narrative for a Silver Age comic, with a two-panel prologue that exists solely to set up a Chekhov’s gun (well, a Chekhov’s belt, but we’ll come to that later) followed by a second prologue which turns out to be occurring in medias res. 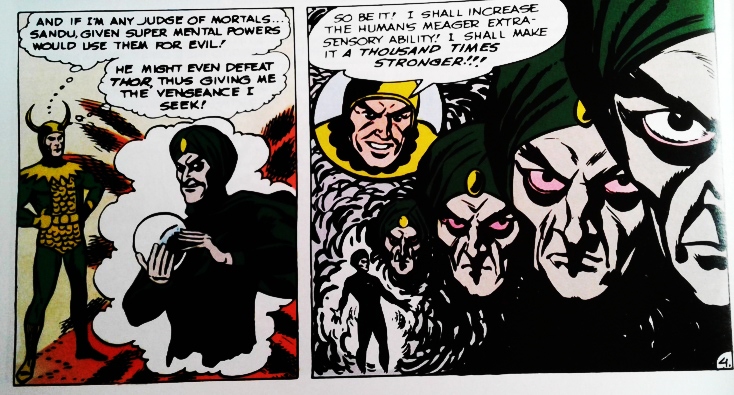 But the plot underneath all this is straightforward stuff: Loki, still trapped in Asgard, looks down on Earth and notices a promising accomplice in the carnival psychic Sandu. After Loki boosts his preternatural powers, Sandu graduates from reading minds to levitating buildings.

END_OF_DOCUMENT_TOKEN_TO_BE_REPLACED

Well, having started and continued my coverage of the 1993 fundamentalist Christian children’s book The Invisible War, let’s bring things to a close.

Molly’s father is teaching her all about the invisible armour she must carry through life: the Belt of Truth, the Breastplate of Righteousness, the Shoes of Peace, the Shield of Faith, the Helmet of Salvation and…

“Yes, the Sword of the Spirit.”

“The Sword of the Spirit? What’s that?”

“The Book of Truth.”

I should mention that the book’s extended use of the Armour of God from Ephesians 6:10-17 is one of the few halfway solid ideas it has. And even then, it manages to botch things with the blatant mixed metaphor above.

END_OF_DOCUMENT_TOKEN_TO_BE_REPLACED

Time to continue my look at a small-press 1993 children’s book written by a fundamentalist Christian who thinks Narnia and VeggieTales are a bit too heathen (read part one for the full background). Before I go on, let me share the book’s official blurb:

This easy-reading book for ages seven through twelve helps children recognize and resist the many spiritual deceptions they face in today’s world. Swayed by movies, songs, games, and books filled with occult suggestions, children everywhere are tempted to see God as a universal force and view the cross as irrelevant. To follow God in a world that loves the popular counterfeits, they need to understand the essentials of spiritual warfare and the key truths needed for victory. Whether you are a parent, grandparent, or a Sunday school teacher, you can use this book to encourage your children to love and follow God. And if you are a boy or girl looking for adventure, you will surely find it in the exciting battle between the evil Baron and the wonderful King.

So, according to this, The Invisible War is intended for seven to twelve-year-olds. That’s… quite remarkable; I’d have said that seven was about the upper age limit. Not just because of the limited vocabulary (this is a story where Satan’s soul-corrupting minions are repeatedly identified as “mean”) but also the limited scope of its ideas.

END_OF_DOCUMENT_TOKEN_TO_BE_REPLACED

Some of you out there may well be familiar with Phil Phillips’ Turmoil in the Toy Box, an influential 1986 book arguing that various popular toy franchises of the era (Transformers, He-Man et al) are introducing children to the occult. Phillips was far from alone in this thinking: amongst the writers who followed his lead was Berit Kjos, who went over similar territory with her 1990 book Your Child and the New Age. Kjos, if anything, appears to be even touchier about such matters than Phillips: her website has taken swipes at Narnia, Left Behind and VeggieTales, all of which she deems insufficiently Christian.

But if even Narnia is a bit dodgy to her, this does rather raise the question of what stories she considers appropriate for children. Well, credit where it’s due, she actually put her money where her mouth is and wrote an entire children’s novel. It’s called The Invisible War and, if you want to give it a look, she’s made the whole thing available on her website. According to Amazon, the print edition was originally published in 1993.

And, you know what, I’ve decided to give it a look.

END_OF_DOCUMENT_TOKEN_TO_BE_REPLACED

Time for another update on the shape of Midnight Widows, the comic I’m putting together with my lovely artistic team. The last time I posted an update, my pre-crowdfund to-do list was down to five items; now, it’s been whittled away to just three. Rather tidily, each of those three tasks has fallen to a different person; my job is to finish off the promotional film.

While I’m hesitant to make any promises right now, it is quite possible that the crowdfunding campaign will launch this month.

Until then, here’s a sneak peek from issue 2. Pencils by Marcela Hauptvogelova, colours by Jio Butler, inks and script by myself… 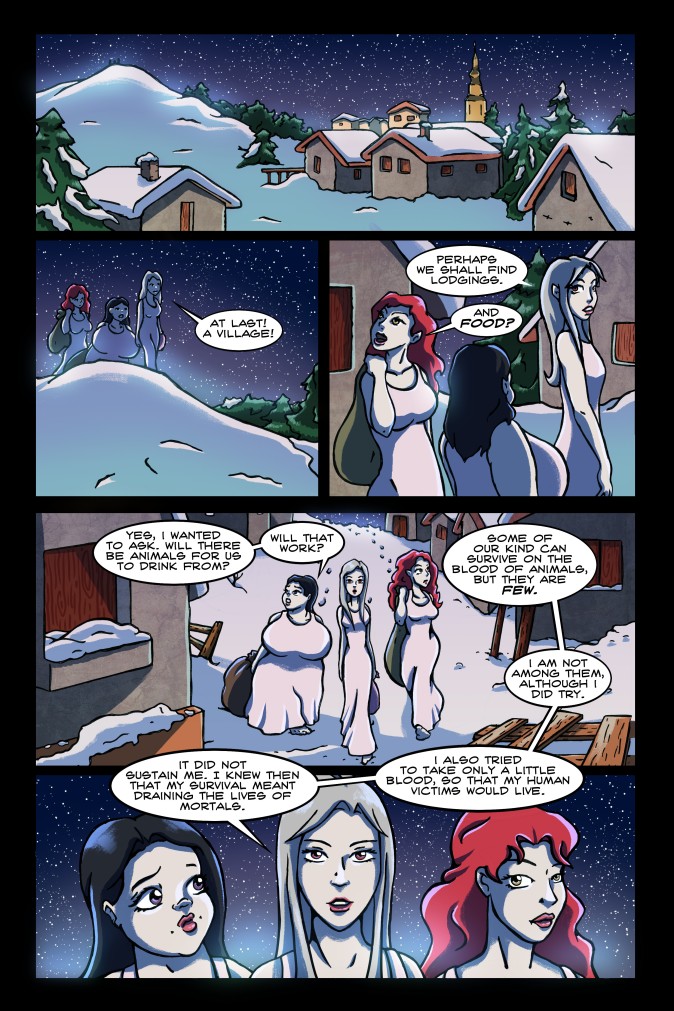