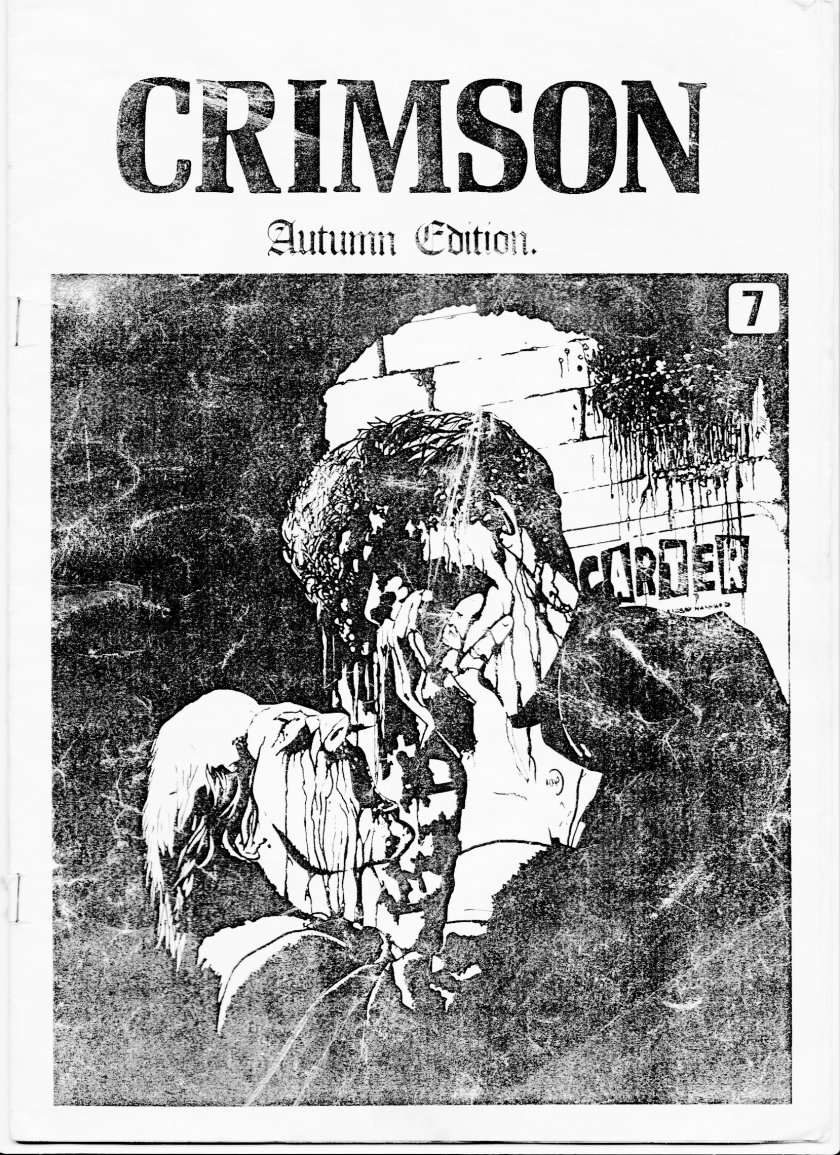 A while back I posted scans from a 1990s vampire fanzine called Pernicious Anaemia (see here and here). Well, now it’s time for another offering from my zine stash: another vampire fanzine, this time issue #7 of Crimson, official newsletter of a group called Thee (sic) Vampire Guild. The issue lacks a date, but appears to have been published in mid-1992.

Crimson #7 opens with an editorial introduction and a poem…

Next is a news section, with some tabloid clippings about recent acts of blood-drinking (the dates of which offer evidence that the issue was compiled in the summer of ’92) and rumours from the set of Coppola’s Dracula (including the presence of “a heroin addicted Van Helsing” and “rampant bestiality”) 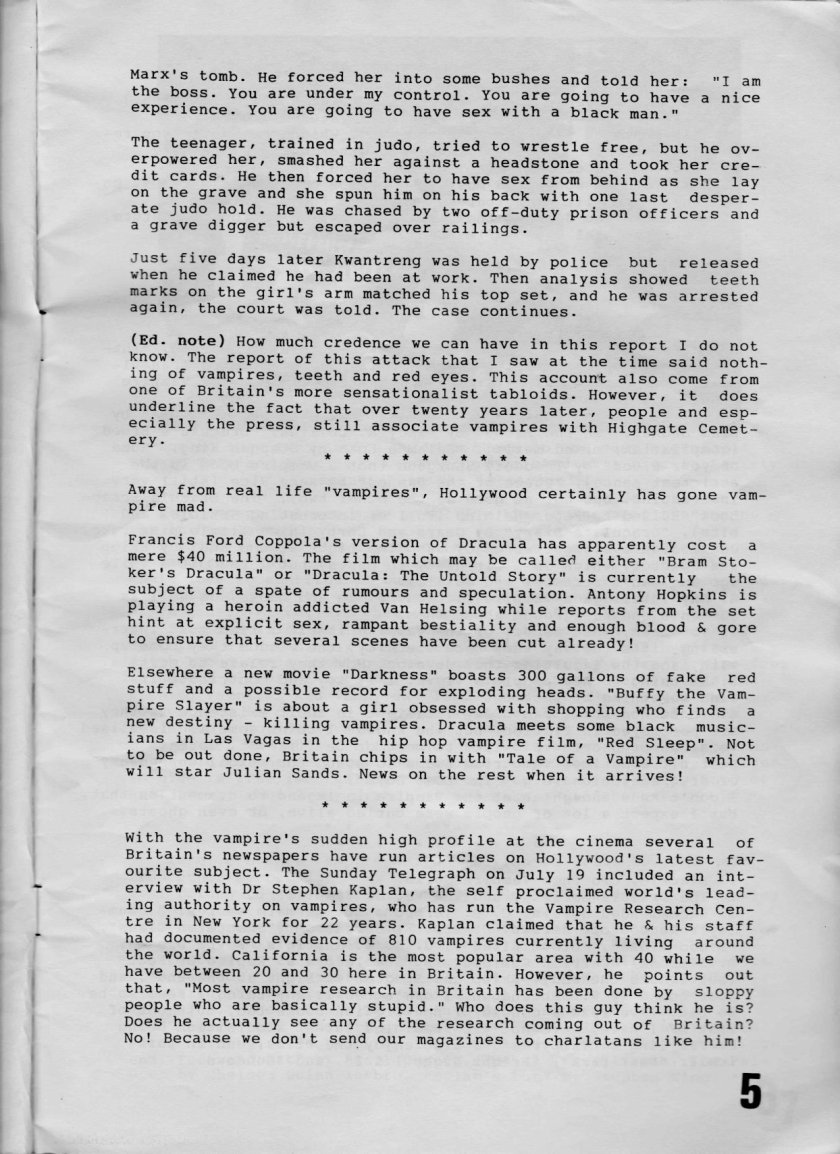 After this comes a round-up of Thee Vampire Guild’s newest members, including responses to a brief questionnaire. This section is a nice snapshot of early-90s vampire fandom, with the correspondents listing their favourite books and films as well as their general opinions on the vampire as a genre, folkloric motif, and even a topic for real-life paranormal research.

Perhaps most remarkable is the person on page 9 announcing their plan to write a sequel to Varney the Vampire, of all things. I can only wonder if anything came of this ambition… 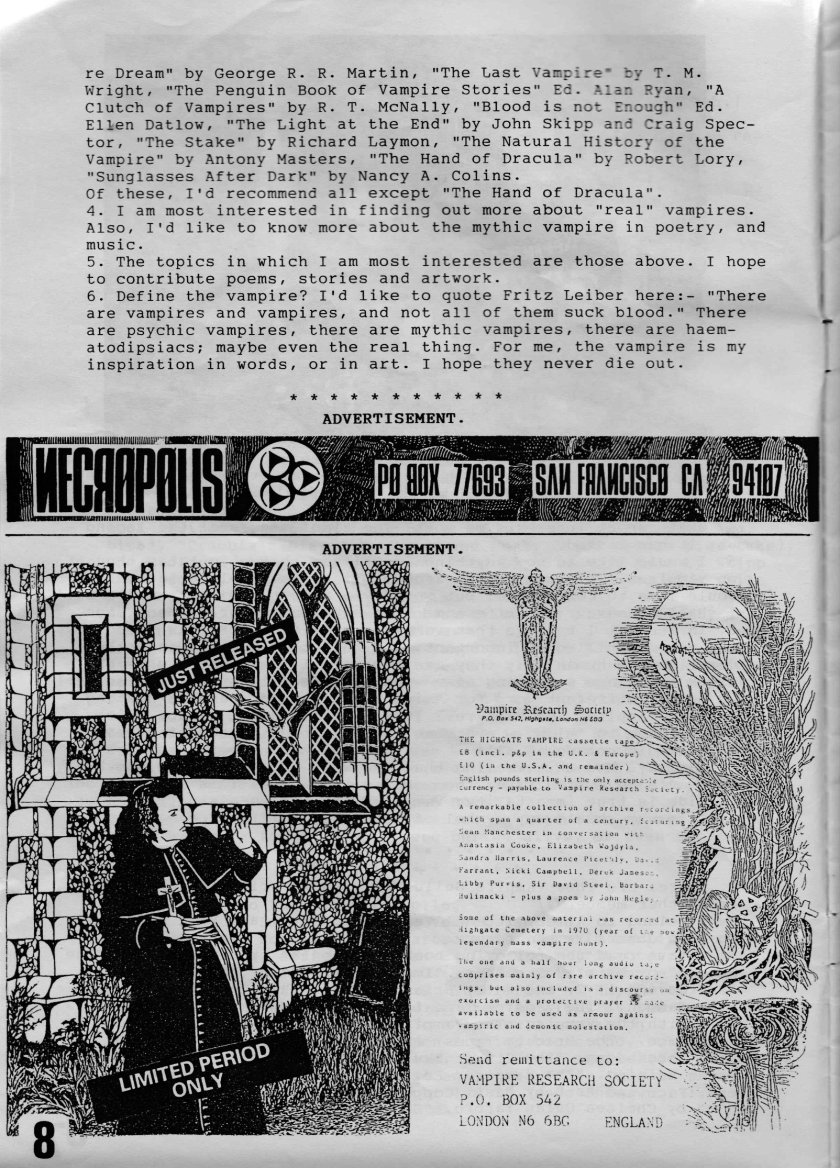 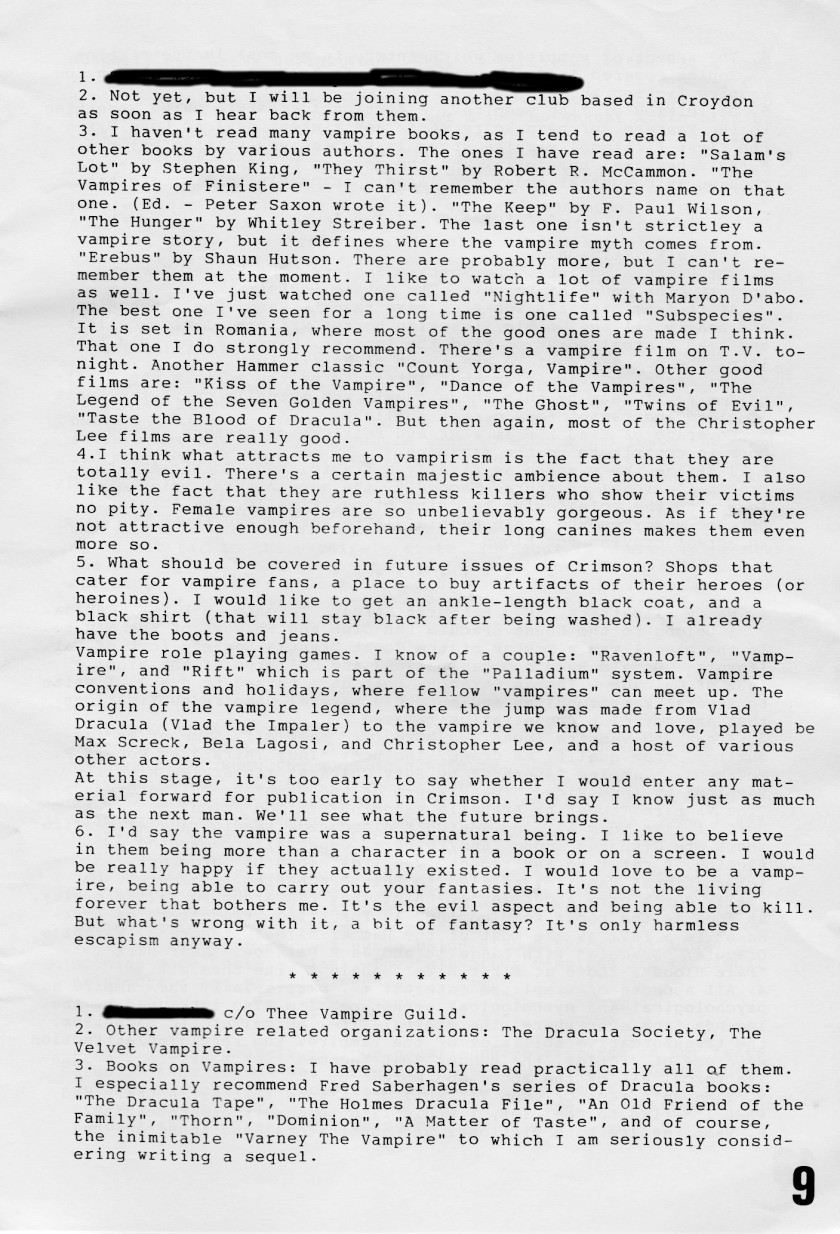 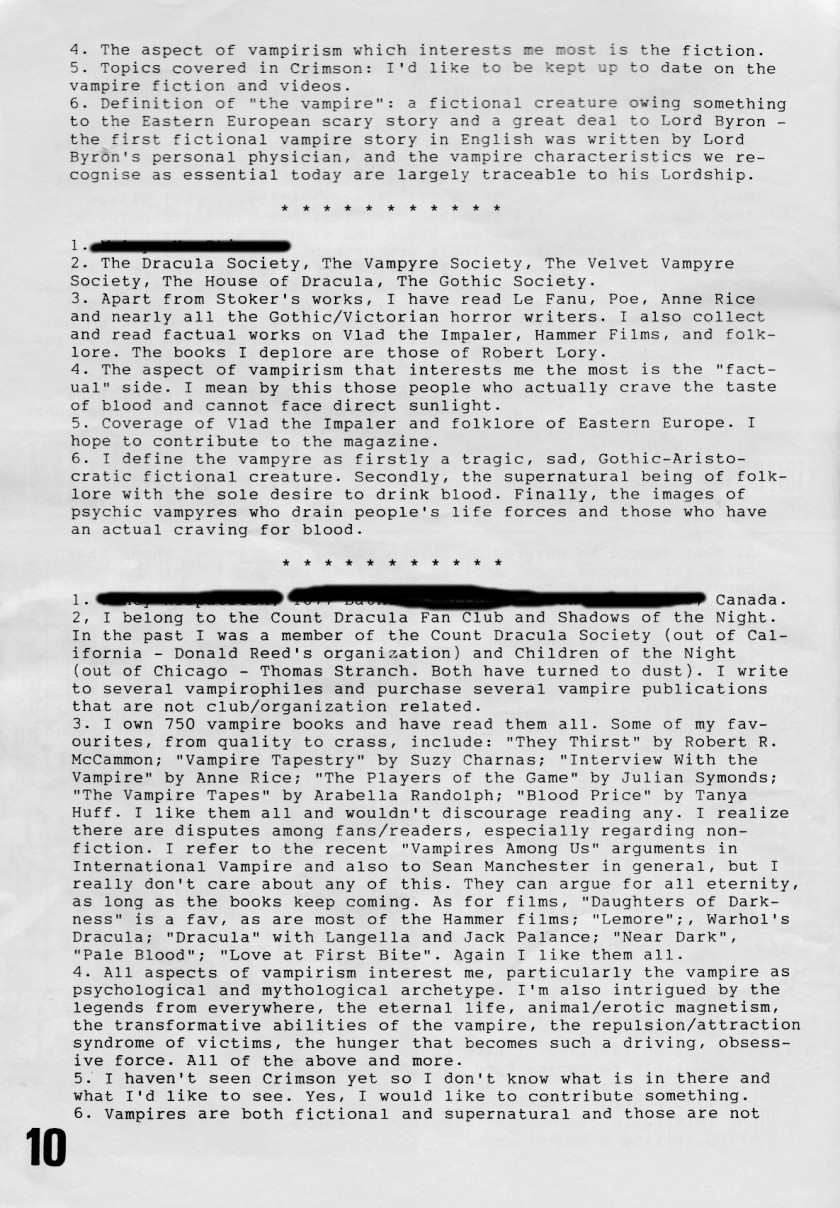 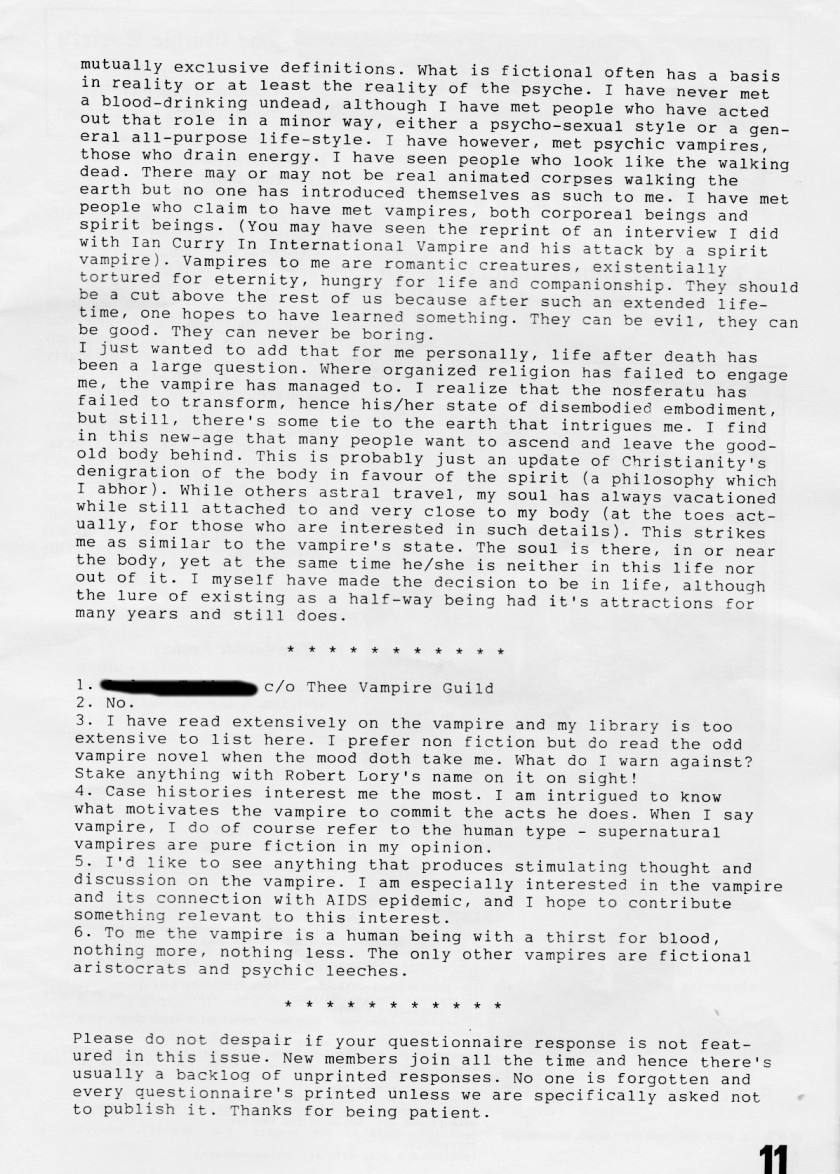 The above talk of “real” vampires leads is nicely to the fanzine’s Curious Cases section. It talks about the Black Lady of Durweston; according to folklore, those who saw this apparition would sicken and die, prompting the author of the piece to theorise that a vampire was afoot.

After someone called Uncle Jackula (apparently a regular contributor up until this point) announcing his departure from the fanzine, Crimson runs a scathing review of the Paul Naschy film Dracula’s Virgin Lovers.

The review is followed by an original short story called “Incubus”, which is credit simply to J.

After this comes the biggest name in the fanzine: His Lordship, the Right Reverend Sean Manchester, O.S.G., D.P.M. Manchester’s piece is called “Nicolae Ceausescu – A Vampire in the Making?” and discusses the alternate rumours that a) the Romanian commie in question was not executed on Christmas 1989, as generally believed, but replaced with a double; and b) that Ceausescu had become a vampire. 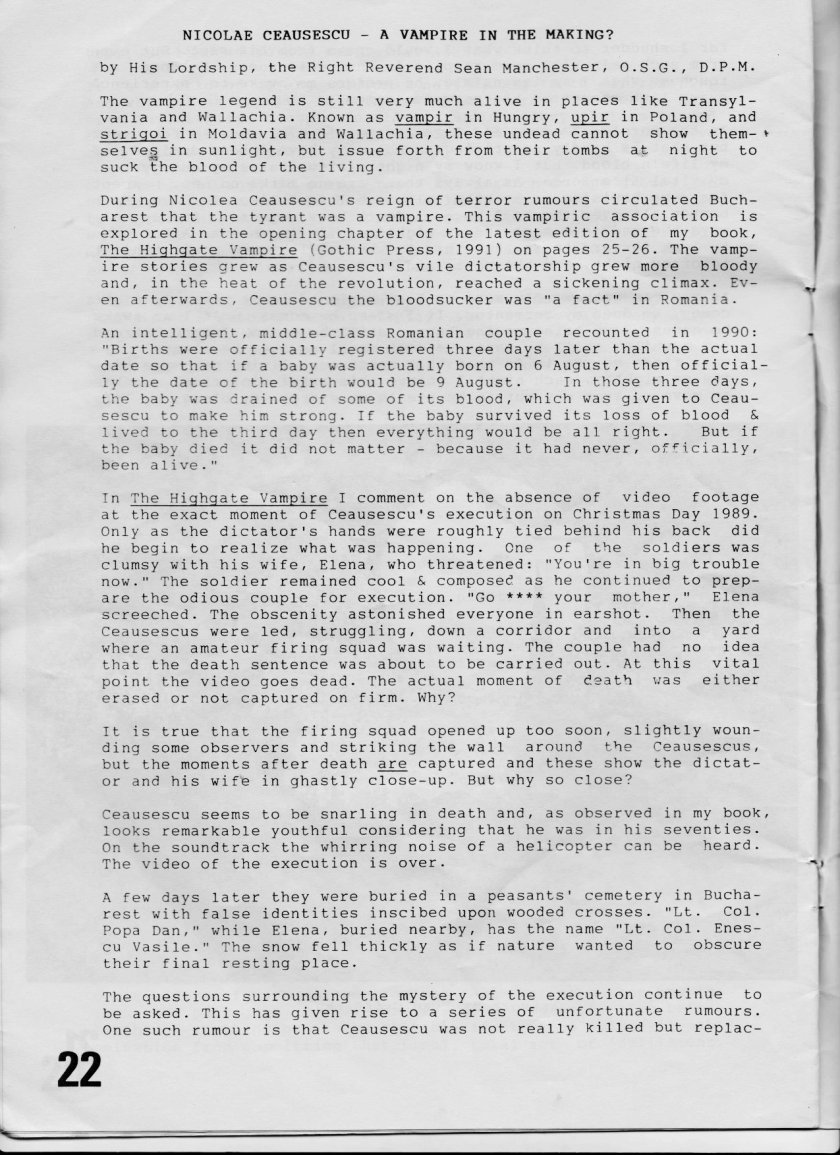 Next up is a letters page, with a piece entitled “The Vampire and AIDS”. This is not, as we might initially assume, about vampire fiction as an analogy for AIDS, but rather about the effect that AIDS might hypothetically have on vampires. 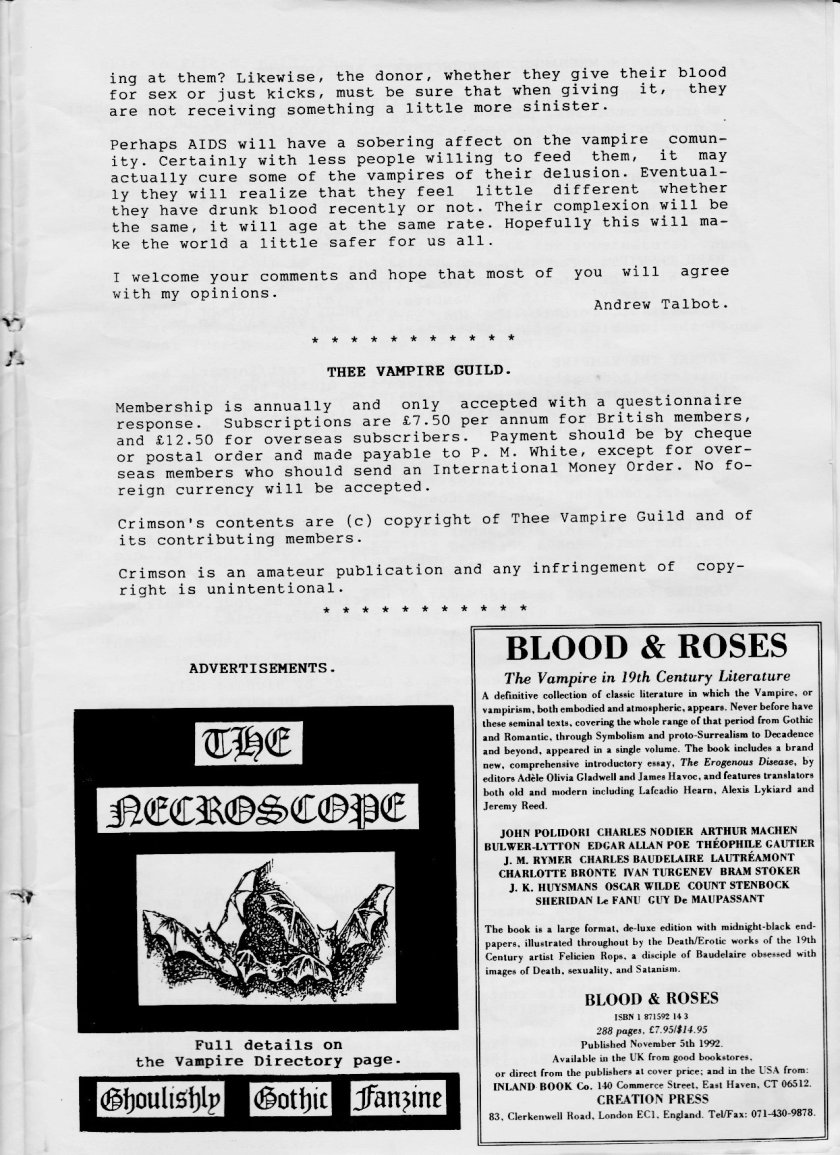 Finally, every good Goth zine needs a bit of poetry to round things off.