Does anyone out there remember how, back in the early 2000s when the GameCube was new, the first footage from The Legend of Zelda: The Wind Waker started an online row that tore Zelda fandom in half? A while back I was speaking to some friends a few years younger than myself who, despite being avid gamers, had no idea that this epic fan-scuffle had taken place; but as someone who was busily misspending my teenage years at video game forums at the time, I can remember it with the clarity of crystal.

For the uninitiated, Zelda: The Wind Waker (or “Celda” as we all nicknamed it at the time) marked a stylistic shift in the series. The previous two Zelda games, on the Nintendo 64, each used a quasi-realistic anime style along the lines of (to pick an obvious comparison point) Princess Mononoke. But the GameCube Zelda went with something drastically different: a cel-shaded aesthetic based on the heavy stylisation of early Toei anime like The Little Prince and the Eight-Headed Dragon.

Fans of the series split into two camps. One side praised the new style; the other objected to their beloved franchise moving in a direction that was, to them, childish and silly.

What struck me about the debate was that both sides were framing themselves at gatekeepers. The anti-Celda faction expressed a feeling of betrayal that the series was apparently courting a younger audience with different aesthetic sensibilities. Meanwhile, the pro-Celda commentators sneeringly dismissed opponents as “Zelda n00bs”, the argument being that anyone who objected to Celda’s style has only played the two recent Nintendo 64 titles, and was unaware that the 8- and 16-bit Zelda games were also cartoony.

Even though I sided with the pro-Celda lot, this struck me as an extremely weak argument: given the rudimentary graphics of the older Zelda titles, whether their aesthetic is read as “realistic” or “cartoony” is down to the whims of the player (and the manual illustrators). A stronger point would be an appeal to artistic integrity – that Shigeru Miyamoto, as the lead designer on the franchise, had the right to whatever stylistic experimentation he felt appropriate. But yet, the tactic of disparaging one’s opponents as clueless tenderfeet turned out to be more popular amongst these teenage gamers. Gatekeeping won out.

But if the Celda dispute ended up as a struggle between two opposing groups of gatekeepers, I have to wonder if the kerfuffle might have gone in a different direction had it broken out today. For one thing, I suspect that there would have been a stronger ideological component — as we’ve seen with some of the more recent backlashes against cartoon and comic stylisation, where critics accuse such changes of being the work of those dreaded social justice warriors.

A case in point is Erica Henderson’s work on Marvel’s Squirrel Girl. This character has gone through a few stylistic shifts since her debut in 1991: her original design by Steve Ditko was somewhat freakish, but later artists cuted her up; Henderson, meanwhile, went with a cartoonishly odd design of her own.

Not long ago this tweet by blogger Dr. Mauser went viral. It shows one of Henderson’s drawings of Squirrel Girl, contrasted with a more conventionally cute drawing of the same character by an anonymous 4chan poster, and a comment implying that Henderson’s odd-looking Squirrel Girl is the result of “identity politics”: 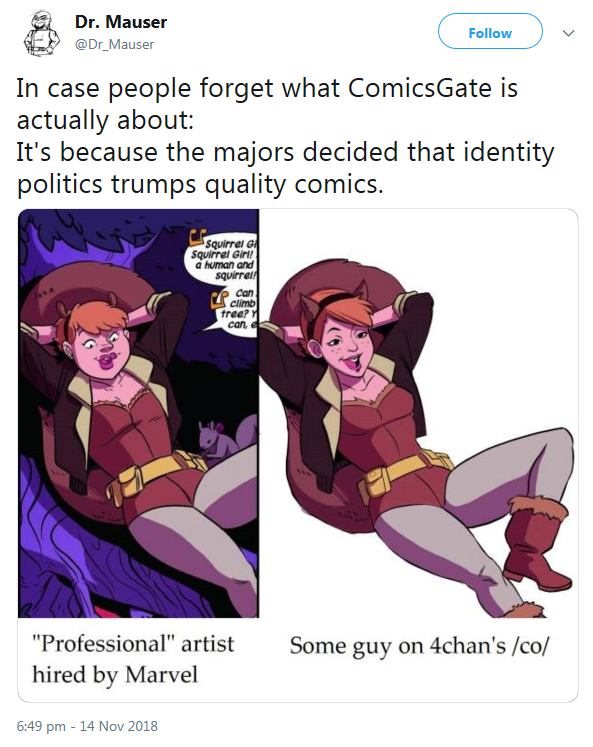 Now, I don’t know for sure where Erica Henderson’s artistic influences lie, but I strongly suspect that she grew up with Klasky Csupo cartoons like Rugrats, Aaahh!!! Real Monsters and The Wild Thornberrys. Those cartoons shared a distinctly odd-looking style informed by offbeat European animation, such as the deliberately grotesque cartoons of Estonia’s Priit Pärn, albeit softened up a little for mainstream US TV.

In other words, if the makers of Rugrats had produced a spoof superhero cartoon, I suspect it would have looked rather similar to Erica Henderson’s Squirrel Girl. Just to drive the point home, let’s apply Dr. Mauser’s tweet to Rugrats by contrasting Phil and Lil with the first image to come up if I Google “cute baby clipart”:

Is this stylistic difference the result of Klasky Csupo deciding that “identity politics trumps quality”? Or is it simply the result of them deciding on a comically odd visual style for their cartoon as opposed to something conventionally cute — just as Erica Henderson did for Squirrel Girl?

I’m tempted to use the phrase “geek panic” (as an adjunct to the moral panics whipped up by the likes of Mary Whitehouse and Fredric Wertham) to describe the backlashes to Celda, Squirrel Girl, She-Ra et al. I’ve seen enough geek panics to know that they tend to follow a pattern, but I can’t help but notice that the particulars seem to have changed over time. I don’t believe that anyone ever questioned that the Zelda kerfuffle was an intra-geek affair — two groups of fans competing for the role of gatekeeper. But with Squirrel Girl and She-Ra, those leading the geek panics have framed things rather differently: they portray themselves as defending their media from what they perceive as an external, corrupting force. To make such an argument, a clear symptom needs to be identified — and a drastic change in visual style is perfect for that job.

The truth is that such stylistic experimentations are nothing new and will always be with us… but then, geek panics do tend to overlook the little details.