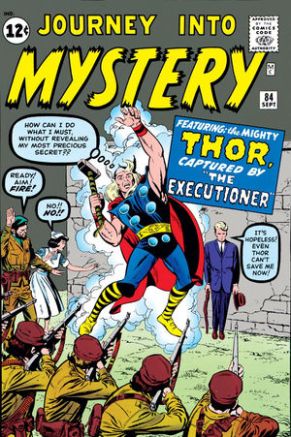 Time to delve once more into the earliest adventures of Marvel’s Thor! Having looked at the character’s alien-thrashing debut in Journey into Mystery #83, let’s take a peek at his follow-up adventure…

The second Thor story, “The Mighty Thor vs. the Executioner”, starts by introducing a favourite ingredient of the superhero formula: the love interest. Don Blake is given a nurse named Jane (her surname is not yet established) and we are told that the two love each other. However, neither can bring themselves to admit this. Don is afraid that she will reject him (“a girl so lovely would never marry a—a lame man!”) while Jane believes that Don is simply not the loving type (“he’s too darn stuffy to ever be a romantic!”)

Despite this, the two have a strong working relationship and both volunteer for an assignment in the fictional Latin nation of San Diablo, which has collapsed into civil war thanks to a communist uprising. The leader of the communist faction, a warlord nicknamed the Executioner, is so ruthless that he orders an aerial attack on the ship carrying Don, Jane and other medical professionals. “There are only doctors aboard”, protests one of the pilots tasked with this mission. “The Executioner does not want the peasants to be cured”, explains another; “He wants them to remain ill, so that they will be unable to oppose us!”

And so, Don becomes Thor again and jumps into battle. He smashes some of the planes with his hammer, and destroys the rest by creating a cylindrical air pocket; clearly a humanitarian deep down, he allows the pilots time to escape with parachutes. After turning back to normal and sneaking into the awe-struck crowd, Don listens to the praise directed at his alter ego: “a figure like a legendary flying god…” “…just like Thor, the mythical god of thunder!” (“And he was so—so handsome!” adds Jane).

We are then introduced to the Executioner, who is drawn as a loutish figure, his feet on his desk and a chicken drumstick in his hand as he sends the commander of the botched air mission to the firing squad. He then turns to address a group of gunmen: “I want the Yankee doctors prevented from treating the sick peasants! If you fail, you also shall face the firing squad!”

The snipers begin firing on the approaching doctors, and Don knocks his stick on the ground to summon a thunderstorm, incapacitating the gunmen. Reinforcements arrive in the form of tanks, so Don turns into Thor to give them a good smashin’. 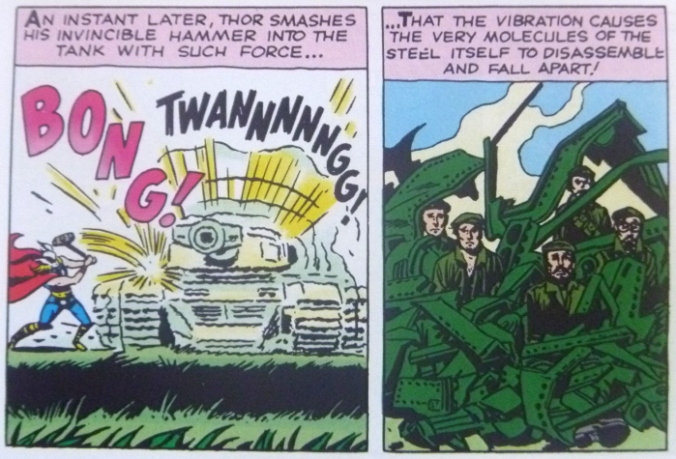 But the trouble is not over yet. The communists capture Jane and take her before the Executioner (“This American girl… she is quite a prize!”) Don responds by first allowing himself to be captured, and then turning into Thor before the firing squad.

At the same time the army of the country’s democratic faction turns up, driving the communists to retreat. Thor causes a volcano to erupt, further pushing the conflict into the democrats’ favour. The Executioner tries to escape on his own with bags of money, but his underlings apprehend and kill him (“He is the cause of our downfall, and now he tries to desert us!” “It is the Americans who are truly our friends…”)

In its last two panels, the story returns to the theme of romantic angst. Jane asks Don where he was during the action, and he is forced to pretend that he had been hiding the whole time. “Hiding!” thinks Jane to herself. “Golly, why couldn’t you be brave and adventurous like—Thor!” Here, we see a commonplace superhero love triangle that dates back to Jerry Siegel and Joe Shuster’s very earliest Superman stories, where Lois Lane was in love with Superman but treated Clark Kent with contempt. 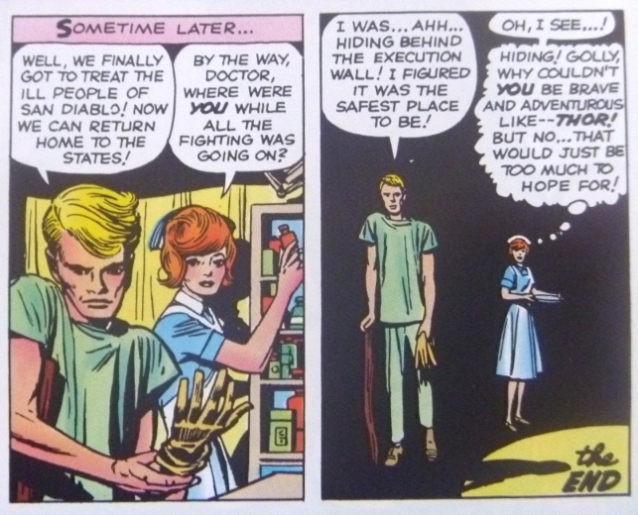 Like its predecessor, “The Mighty Thor vs. the Executioner” does not engage with Norse mythology beyond pitting a Thor-themed superhero against a stock comic book threat – here a military dictator, rather than the aliens of the first storyline. The main purpose of the story is to continue showing off Thor’s powers while also expanding his world by giving him a love interest.

Since this issue does so little with mythology, let me wrap things up by seeing how Jack Kirby’s interpretation of Thor compares with historical depictions of this deity.

(Thor and the giant Hymir, as depicted in a medieval carving)

(Thor, as depicted in a 17th century Icelandic manuscript) 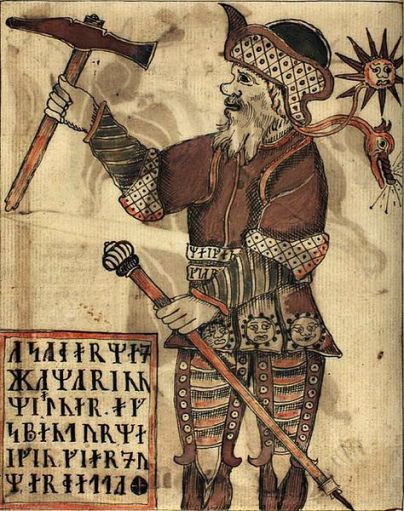 (Thor, as depicted in an 18th-century Icelandic manuscript)

None of these depictions are the sort of stuff superhero comics are made from, but Kirby would also have had some more recent interpretations to draw upon: 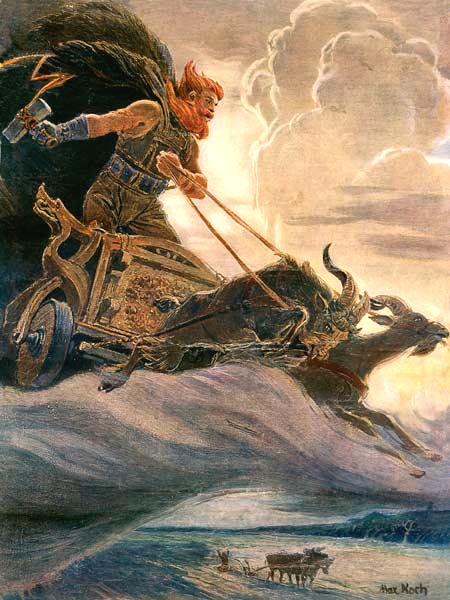 However, these pictures show a burly, read-bearded Thor quite unlike the lithe, blonde, youthful-faced hero of Marvel. Jack Kirby appears to have been influenced by depictions of another figure from Germanic legend, Siegfried: 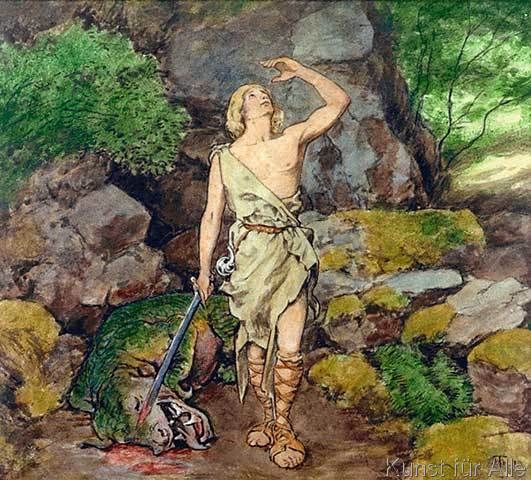 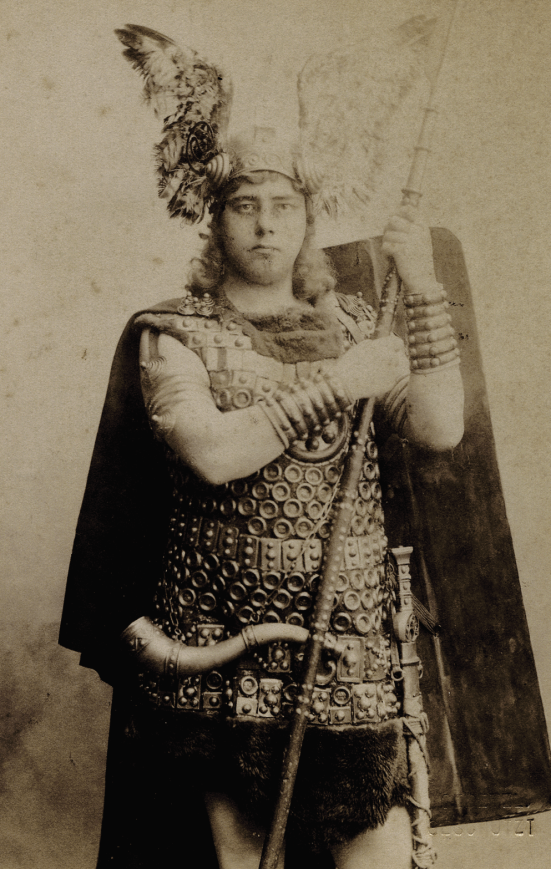 (Eric Schmedes as Siegfried, circa 1898) 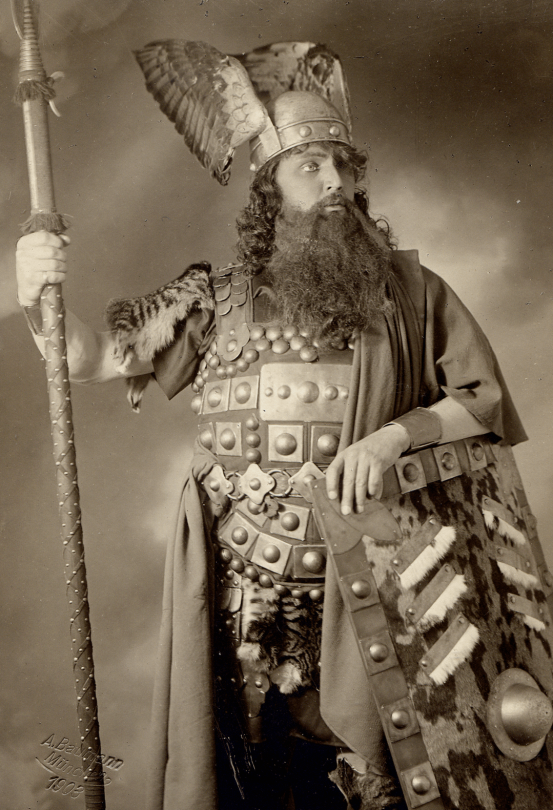 The third Thor story will delve a little further into Norse mythology as it introduces another member of the pantheon: a chap by the name of Loki…