I very much dig Yoe Books’ line of 1950s horror comic reprints, and I’ve just finished Mummies, which is the first in a new series of monster-themed compilations. These comics date from a pretty dry spell for mummy films – to put things in context, come 1955 mummies were reduced to acting as foils for Abbott and Costello – so it’s interesting to see comic creators try to zap new life into the dried-up genre.

One of the first things that struck me is just how talkative these mummies are. Movie mummies aren’t noted for their conversational skills; even Ardath Bey was something of a strong silent type. Comic book mummies, on the other hand, show a tendency to waffle on at length:

“My friends, our tomb has been defiled by intruders! They have left a decaying corpse on our sacrificial alter! They must be destroyed before we can return to the beyond!!”

“I am Ra, the one who had been condemned to death for my practice of magic! But once again I triumph!”

“When you’re dying, Ordney, with my choke cloth tied around your neck, perhaps you’ll see how wrong you were to deny that supernatural power exists!”

“Feel the terrible strength of Ramxu XI. I who have slain scores in battle, do not fear such as you. And you cannot keep me from accomplishing my mission. How easily they die! And how I envy them. But soon I will be able to die, and once again be with Oaana, my love!”

As well as being more loquacious, these mummies are more gruesome than their film counterparts – but hey, would we expect less than the comics that kicked off a moral panic in their heyday? The most graphic specimen on offer is “The Living Mummies” from Chamber of Chills, where an archaeologist is eaten alive by killer ants in the desert. He is later resurrected by a local band of mummies, who help him to hunt down and punish his comrades for callously leaving him to his fate. The sight of the ant-eaten man is more gruesome than the relatively understated mummies, and the other two archaeologists end up falling to similarly macabre fates: one is also eaten by ants, while the other is skewered in an iron maiden, the bloody wounds in his back lovingly detailed by the artist.

The stories tend to mix-and-match mummies with other horror subgenres. “The Unburied Mummy” from Witches Tales has a scientist resurrect a mummy in a laboratory clearly lifted from Frankenstein; his process combines ancient Egyptian magic with a “new activation chemical”. This mummy is seven feet tall, but yet this impressive statistic is topped by the mummified sorceress Rah Kamsis in The Thing’s “The Mummy’s Curse!” She somehow becomes deformed in her grave, growing to superhuman size and developing a bulbous, misshapen head in the process. She is then brought to life in another laboratory experiment: “The electric vibrations have activated the cortex of the mummy!” 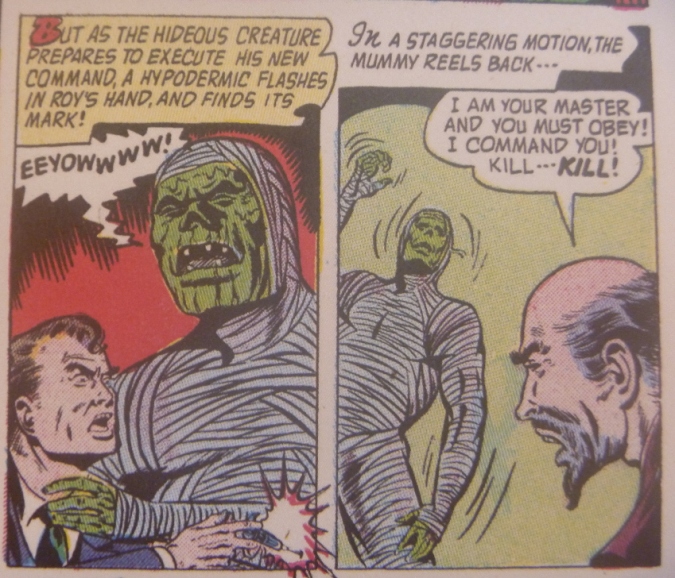 Giant mummies are something of a recurring theme, in fact. When a villainous Egyptologist in Forbidden Worlds’ “The Mummy!” resurrects Rhames-Tut-Arkham (“greatest and most evil ruler of ancient Egypt”) the bandaged revenant turns out to be another hulk, standing at least a foot above his hapless victims.

Just as Universal’s The Mummy ends with the goddess Isis striking down Imhotep, these comics sometimes put their mummies alongside other supernatural beings drawn (with varying degrees of fidelity) from Egyptian iconography. Web of Mystery’s quaintly-titled “The Persevering Mummy” has a mummified evildoer, Dramid, coming to life and hatching the ingenious scheme of killing the museum head and stealing his clothes, so that he can pass himself off as a regular Joe; but then Osiris turns up to punish him.

“The Case of the Beckoning Mummy” in Web of Mystery, the undead Kali-Dahn appears first as a wizened old fortune teller in a Cairo marketplace, and later as a bandage-clad spirit. “Vault of the Winged Specters” from The Beyond has the mummified sorcerer Uer-Moa transform into a bat-winged vulture (this is meant to be a representation of the ba, depicted in Egyptian art as a human-headed bird) and then return as a Nosferatu-like figure.

“Priestess of the Sphinx” starts out looking like a loose retelling of the Boris Karloff Mummy, with a descendant of Imhotep resurrecting a mummified priestess. It then plunges into Lovecraftian territory: the priestess turns out to belong to a sinister cult, erased from history by the Egyptians, whose central practice involves bringing the Sphinx to life and getting it to provide occult knowledge in return for human sacrifices. 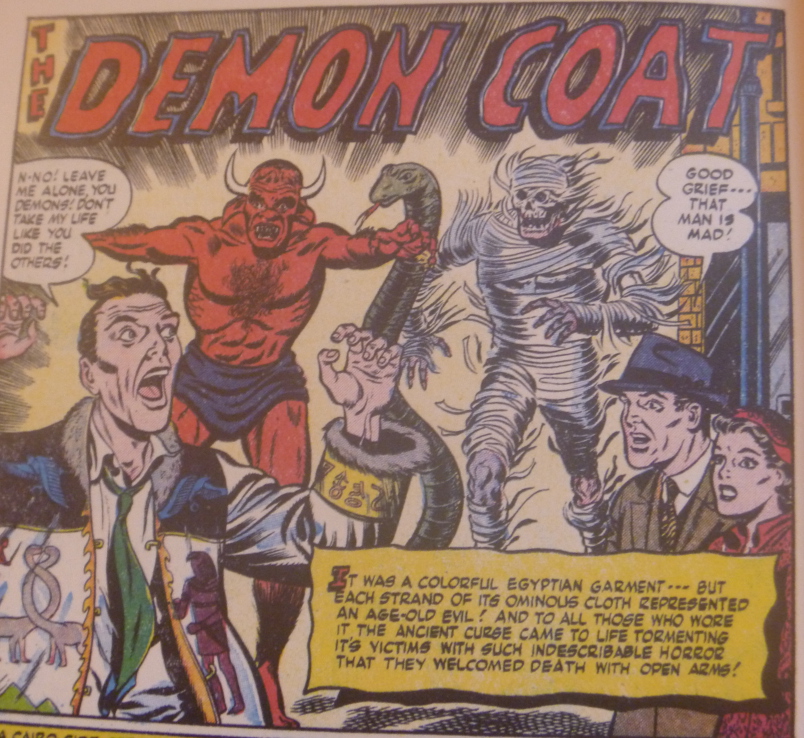 All of this is very silly stuff, but I find myself giving honest props to “The Demon Coat” from Web of Mystery. This story follows a series of characters as they suffer the ill effects of wearing a coat that had been buried with Tutankhamen himself. As drawn, the coat is of dubious authenticity – a fur-trimmed garment with a picture of some dinosaurs on it – but the effects are actually quite interesting: the wearers have visions of those around them transforming into walking mummies and other hideous monsters, and die of shock. By the standards of 1950s comics, this is a pretty subtle piece of psychological horror. 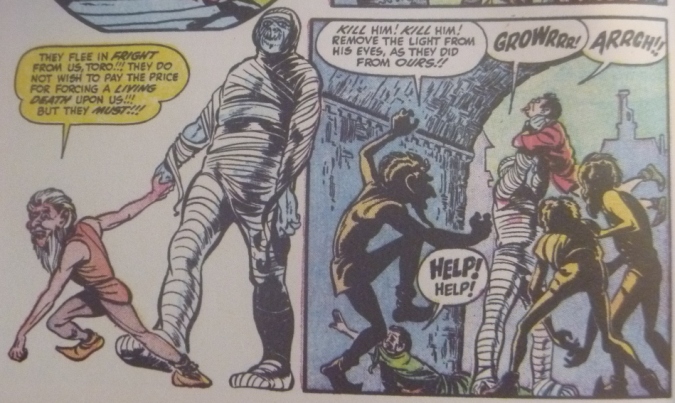 Not all of the mummies in the book are Egyptian. “Servants of the Tomb!” from Witches Tales is a brilliantly bonkers story set in medieval Europe, where a group of squat, gnome-like dudes have been sentenced to spend their lives preparing the dead in a crypt, as punishment for unspecified crimes. One of the cadavers placed into their care is of Toro, a legendary giant who could be resurrected by moonlight. For no particular reason they decide to wrap Toro in bandages before putting the legend to the test, after which another giant mummy is let loose on the world. He is eventually destroyed by a He-Man prototype called the White Giant of Peace, who descends in a bolt of lightning to peacefully bludgeon Toro’s head in.

Last but not least, we have the hilarious “true tales” culled from various comics (Ace Magazines seems the prime purveyor). Purportedly retellings of genuine supernatural occurrences, these were clearly made up on the spot by the comics’ writers.

One involves a mummy attacking and killing a museum guard; the authorities conclude that this happened because the victim looked like the man who murdered the mummy in life (and who is helpfully illustrated in the sarcophagus carvings); they put their theory to the test by setting a similar-looking man in front of the mummy, which obligingly comes to life. Unfortunately, it appears that nobody subsequently felt the need to duplicate this test with photographic equipment at hand. Elsewhere, we are expected to believe stories of archaeologists digging up an ancient slave who had spent thousands of years in suspended animation, and who only died after unwrapping his mummified love; that an archaeologist named Carter (surely not Howard Carter?) was abducted by vengeful mummies and turned into a mummy himself; and that another luckless researcher met his end when a wall-painting of an Anubis-like figure came to life and strangled him.

HONOURABLE MENTION: Another book in Yoe’s horror line, Haunted Horror 3, reprints a story from Terrific called “Dead on Arrival”. Once again, this turns out to be a pseudo-Lovecraftian tale filtered through Universal iconography.Here, an Egyptologist named Myra studies dark magic and brings a mummy to life. This turns out to be merely the opening number: for the denouement, she dresses up as a belly dancer and summons Anubis, who “wold enslave the world in a nightmare of horror”.

That about wraps things up (oh ho ho ho). If you want to see some of the kookier mummies to walk from their tombs, you now know where to look. 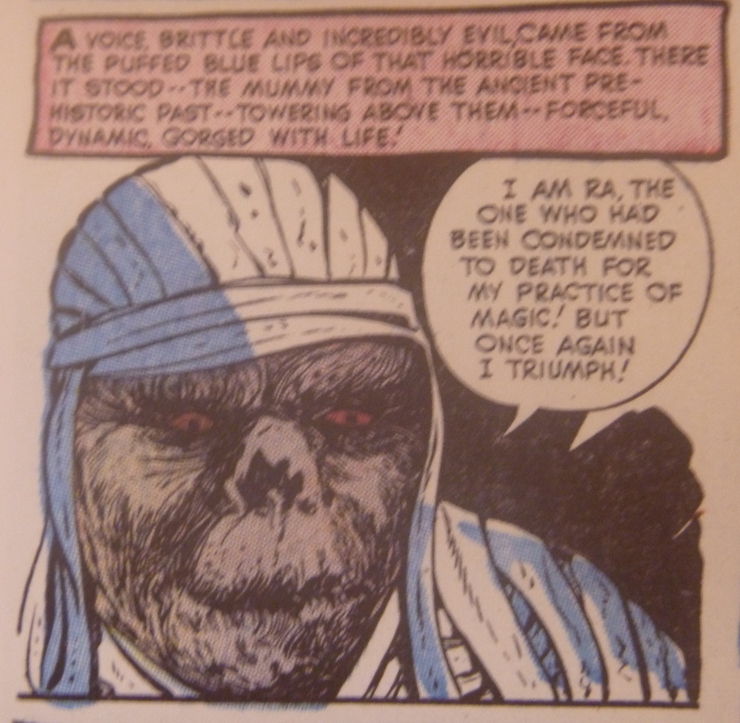