“We’re pirates now. We shall take what we need.”

— Jay Kalam, The Legion of Space

Williamson, who lived to be 98, had an impressive career as an author and was still having work published into the twenty-first century. But what I’m interested in here is his early work: namely, The Legion of Space, which was serialised in Astounding Stories in 1934 before being collected as a novel in 1947. I’m basing this post on the 1947 version, which Williamson had clearly revised — as evidenced by a reference to Pearl Harbour near the start.

The novel opens with a prologue set in 1945, where a character named John Delmar describes his premonitions of the far-flung future – a framing device recalling Olaf Stapledon’s work. Delmar’s visions include his son becoming the pilot of the first manned atomic reocket in 1956, and subsequent descendants taking part in the colonisation of the Moon, atomic wars in the 1990s, battles with Martians, and the eventual conquest of the entire solar system. During the course of all this, the family’s name changed from Delmar to Ulnar. Closer to the present, however, John Delmar also foresaw his own death later in 1945 – and duly perished of influenza, leaving his written account of the future in the hands of Williamson’s narrator.

The main character of this thirtieth-century story is John Ulnar; he is referred to as John Star in the narrative, although as far as the actual plot is concerned he does not receive that title of distinction until later on. Star/Ulnar is a new graduate of the Legion Academy, ready to begin his life as a full-fledged member of the Legion. Legion membership runs in the Ulnar family: the Legion’s Commander is one Adam Ulnar, while John Star’s new commanding officer is Captain Eric Ulnar.

The stern Major Stell assigns Star with the task of protecting a girl named Aladoree Anthar, who holds a secret of vital importance. This turns out to be a weapon, known as AKKA, which was invented by one of her ancestors. Accompanying Star on the mission are Jay Kalam, Hal Samdu and Giles Habibula.

The backstory includes a war between a despotic imperial force, signified by the colour purple, and a revolt set up by democratically-inclined research scientists, who adopted the colour green and established the Legion’s headquarters, the Green Hall. The conflict ended two hundred years beforehand, with the abdication of the last Emperor.

After the death of a Legion member, Eric gloatingly spills the beans: he is a traitor hoping to reinstate the Empire. On an earlier expedition he had found a planet orbiting Barnard’s Star inhabited by a sapient race, which provided Ulnar with advanced weapons in exchange for iron – a priceless rarity to the aliens. Ever the traitor, Eric plans to wipe the aliens out after he has obtained the AKKA weapon. But such an eventuality is a way off, and for now, the human villains are aligned with the aliens.

Star had already had a brief encounter with one of the aliens, when he woke up one night to see an enormous eye staring at him, but had dismissed the incident as a nightmare (“no creature in the System had eyes a foot long, not even the sea-lizards of Venus”) Now he is confronted by another of the beings, with a blobby body “translucently greenish, wet, slimy, palpitating with sluggush life” and a single eye “veiled with ancient wisdom, baleful with pure evil”. A red gas renders him unconscious; when he recovers he is alone, the villains having made off with Aladoree. 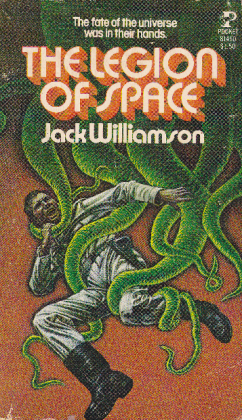 Williamson’s portrayal of the aliens deserves highlighting. Edmond Hamilton had made similar use of weird alien life-forms in his Interstellar Patrol stories, but his depictions of these creatures were relatively tame compared to the Lovecraftian pitch that Williamson achieves: the Medusae are  entities so hideous that the human mind risks breaking when confronted with their existence. When Star and his crew decide to set off to confront the Medusae, they do so with a large degree of apprehension as: the last set of Legionnaires to visit that world came back “blessed babbling lunatics, chattering to freeze your blood about the horrors they had found on the dark and hideous planet of that evil star” before their flesh rotted from their bones due to an alien virus. It should be mentioned that Williamson was a disciple of A. Merritt, who mixed fantasy with weird horror — and Merritt was himself an influence on Lovecraft.

At the same time, Williamson shares much of his worldbuilding toolbox with Edmond Hamilton. The Medusae, whose species predates the existence of Earth, have long since used their mineral resources; so, they artificially mobilised their star, and since then have been travelling around the galaxy looting and colonising various worlds, with Earth their next target. This concept is right out of Hamilton’s stories, in which antagonistic aliens are prone to yanking vast astronomical objects around space as weapons in resource wars.

On the planet of the Medusae, the heroes encounter such hazards as a “great mass of hungry protoplasm” that attacks them in the sea, tentacle-like vines, and a serpentine beast with talons and armour. Finally, they come to the planet’s city: “A black metropolis, designed by madmen and built by giants.” Inside, they encounter the half-mad Eric Ulnar, who has been betrayed by his alien allies.

The planet also houses “dread instrumentalities of a science older than the life of Earth” but the protagonists show an ingenuity of their own, with Star at one point building a glider from the wings of a dead alien. They find an unlikely ally in Adam Ulnar, who regrets his alliance with the aliens and is losing faith in the Empire – and turns out to have since killed Eric, leaving Star as heir to the throne.

The more horrific aspects of the story reach their heights during the climax, as when Star encounters a former Legionnaire who has turned to cannibalism:

It had been a man. A gigantic man. It must have survived through the days of terror by sheer brute strength. Nearly seven feet tall, its body half naked, half clad in the ragged, filthy garments of a Legion uniform… Its skin was a mass of bleeding sores, scabbed and crusted horribly with hard green flakes. Red-rimmed eyes, green-clouded, hideous, stared from the horror of its face, half sightless. Its lips were gone. With naked fangs it was gnawing avidly at a fresh red bone that John Star knew, shudderingly, from its shape, to be a human humerus.

Star himself nearly succumbs to insanity:

He was laughing. Laughing at a monstrous joke. The joke was the death of the System, by madness and green leprosy. And its point, the death of those who tried to save mankind, by the same slow decay. A fearful joke! So terribly funny!

Finally, the heroes rescue Aladoree, who succeeds in constructing the weapon known as AKKA. This turns out to be a deceptively simple handheld device, which somehow eradicates Earth’s moon (the base of the Medusae occupation force) in the blink of an eye. “They were annihilated,” explains Aladoree. “Even the matter that composed them no longer exists in our universe. They were flung out of all we know as space and time.” But she can’t explain the workings of the device, lest it fall into the wrong hands. Humanity is saved, and John Star has won the trust of Aladoree.

The characterisation is often flat and the deus ex machina ending a let-down, but out of all the stories I’ve looked at in this series, The Legion of Space stands up the best. It is also unusual for its sheer darkness, with the Lovecraftian aliens and themes of betrayal and insanity; even the comic relief character, the Falstaff-like Habibula, ends up a rather depressing figure, as he (justifiably) bemoans his situation with almost every line of dialogue. The romance between John Star and Aladoree is one of the few bright spots in this gloomy narrative. Jack Williamson staked out the common territory between space opera and horror.

For the next post in this series, I’ll be taking another look at Edmond Hamilton…

One thought on “Space Opera Archaeology: Jack Williamson and The Legion of Space”