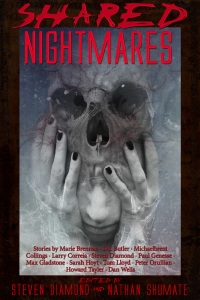 Researching for Monster Hunters, Dinosaur Lovers has done zilch to reduce my TBR pile, but it has been interesting to explore some of the nooks and crannies of contemporary indie publishing.

One of the chapters in my book will be about the intersection (or lack thereof) between the Sad/Rabid Puppy campaigns and horror fiction. It’s clear that the Puppy authors have, by and large, not spent a great deal of time within horror – but there are exceptions to this. Nathan Shumate’s small-press outfit Cold Fusion Media specialises in horror anthologies, and has published short stories by a few of the Sad Puppies campaign leaders: Larry Correia, Brad Torgersen and Sarah Hoyt. Naturally, this was something I had to look into, so I snapped up Cold Fusion’s Shared Nightmares, a 2014 anthology themed around dreams and nightmares with contributions from Correia and Hoyt.

Larry Correia’s story, “Father’s Day”, could be roughly summarised as a mix of A Nightmare on Elm Street and Starship Troopers. It takes place in a future where Earth is being invaded by a race of aliens who attack humanity by appearing in dreams. Our hope for survival lies with certain people who have the power to fight back against these invaders in their sleep. The main character is a man whose small daughter happens to be one of these people – and the authorities want to place her into a medically-induced coma to maximise her contribution to the war effort. The emotional core of the story is formed by the father’s anguish at this prospect, and his daughter’s unflinching willingness to fight the good fight.

So, “Father’s Day” is as much military SF as it is horror. That’s not a criticism – the story is an entirely solid piece of work – but it does reinforce the general pattern I’ve been noticing: that when the Puppy authors write horror fiction they tend to draw upon other genre traditions, ones that are more popular in their circle – in this case, milSF.

Sarah Hoyt’s “Dreamcatcher” is a more straightforward horror story. Unfortunately, it’s not a very good one. The story posits that there are evil spirits that appear in dreams and possess dreamers, turning them into serial killers (Jack the Ripper was apparently an earlier victim of this process). The main character is a woman who runs a private business fighting these spirits, a job that she was trained for by her grandmother.

This is a perfectly workable premise – I can see it working as the set-up to an urban fantasy series – but the execution is poor, with the horror carrying no weight. First, the monsters are dispatched so casually that they pose little credibility as threats:

“The third most important ting,” Grandma said, as she entered my dream and beheaded the nameless horror that my high school boyfriend had turned into, “is to know how to take an ax with you into the dream, and o to keep it sharp.”

Later on the story tries to conjure a dread of the unknowable by introducing an eldritch “king of nightmares”, but the result is merely vague rather than mysterious or intriguing.

That said, the other stories in the anthology reach a higher standard.

D. J. Butler’s “Incubation” tries to capture the narrative logic of dreams, with the perhaps inevitable result that reading it is a detached experience, like reading an account of someone else’s dream.

Tom Lloyd’s “The Devil on my Shoulder” is about the hallucinations of a paranoid schizophrenic – namely, an angel and a devil who try to manipulate his moral path.

Paul Genesse’s “Onnen” is a story set in feudal Japan in which a ghostly woman haunts the nightmares of the people who wronged her and her baby in life, with rather repetitive results.

Michaelbrent Collings’ “To Dream Awake, to Sleep the Real” starts out focusing on a father’s dreams: positive dreams of his family’s future, and anxious dreams of things going wrong. It then shifts gears and becomes a tale about the dehumanising effects of technology. It does rather feel like two separate stories mashed together, but has enough good ideas to just about work.

Steven Diamond’s “What Hellhounds Dream” is an urban fantasy story where a man receives a fatal bullet wound on a crossroad; he is returned to life, on the condition that he act as a hitman for supernatural forces.

Marie Brennan’s “The Damnation of St. Teresa of Avila” is a historical piece about the religious visions of an Inquisition-era nun.

Max Gladstone’s “Man in the Middle” is a comedic urban fantasy which reveals that our dreams and nightmares are being manipulated by office-dwelling wizards.

Howard Tayler’s “U.I.” is set in a dystopian future where human dreams have merged with virtual reality, and are used by the populace as a means of escaping from daily pressures into a world of fantasy.

Peter Orullian’s “The Quality of Light is Not Strain’d”, the longest story in the collection, tackles the theme of traumatic memories recurring within dreams, as the main character is forced to confront a dark figure from his past.

Finally, “Health and Wellness” by Dan Wells is a dystopian story in which a paranoid man becomes convinced that his government-prescribed medications are part of a sinister conspiracy. He turns out to be right, although the nature of the conspiracy is not quite what he imagined.

All in all Shared Nightmares is a solid anthology. The contributors did a good job of avoiding repetition despite the overarching theme: even though some have picked similar subjects, each came up with a distinct spin.