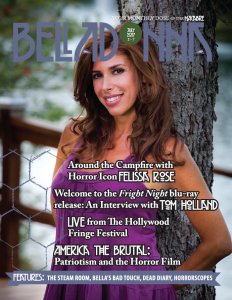 A month wouldn’t be a month without Belladonna, and July is no exception! The latest issue of the Horror Honeys’ lovingly-produced magazine is on the digital newsstands, and as always, it is positively lubricating itself with horror-themed goodness.

Amongst the highlights this month: LinnieSarah reviews the re-release of Fright Night, followed by an interview with its director Tom Holland! Guest contributor Becky Sayers looks at the theme of American patriotism in horror films! Brittany flies the flag for the under appreciated sci-fi musical Bang Bang Baby! Sarah is unimpressed by a Tom Cruise movie! Sleepaway Camp star Felissa Rose turns up for an interview! Kim shows us that Jaws is not the be-all and end-all of shark-themed horror films! Samantha analyses the queer side of horror cinema! Jess sums up the most promising games from E3!

And the above is only the merest sampling, as this contents page so ably illustrates.

My comic reviews this time around are Marvel’s Doctor Strange and the Sorcerers Supreme and DC’s Raven. Also included is the first in a regular feature on women in comics: 666 Sketchbook. This month, Kit Cox is presented with a set of questions that I assembled.

And also! Midnight Widows, the comic that I put together with artist friends Rosie Wigg and Marcela Hauptvogelova, reaches its third instalment. Vampiress Edith is abroad in London, and she is on the trail of her latest prey…

Wanna read Belladonna? You can get it from the official website, MagCloud or Magzter. Give it a try and, if you like what you see, please consider placing a subscription and perhaps donating to the Horror Honeys’ Patreon.