I have no idea if Transform-A-Snack exists outside of the United Kingdom, but here, it’s a national institution. For the bargain sum of 30p, you get a packet of Transformers! That taste of cheese and onion! It’s a Transformer… that’s also a Wotsit!

Well, that’s the idea, anyway. Long have I seen Transform-A-Snacks on newsagent shelves, but now, for the first time, I have picked up a packet for myself to see just how well the premise pays off…

Be warned, Golden Wonder. You may have impressed generations of 5-year-olds, but now, Transform-A-Snack is being interrogated by a critic of more discerning taste. 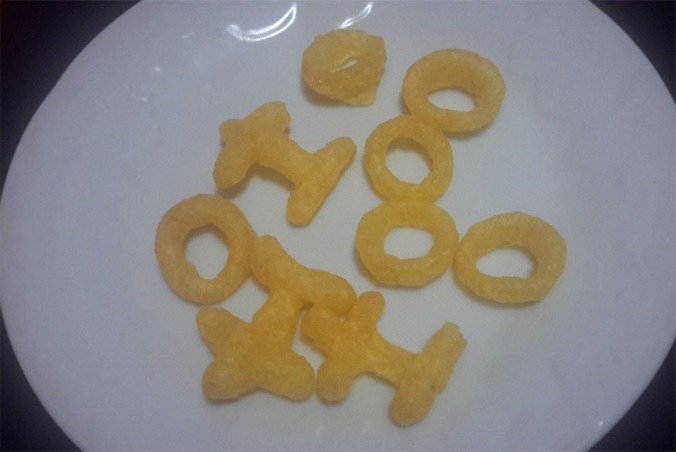 So, this is what you get when you open the pack. Some pieces are hoops, while others are vaguely humanoid. I distinctly remember that, when I was a kid, the packet depicted the humanoid shapes with rudimentary faces. That, I now see, was a lie. A shocking, heinous lie. Almost as grave as the lie that Sea Monkeys are sapient beings which maintain nuclear families in an undersea kingdom.

Slip four hoops onto the limbs of a humanoid shape, and presto! It has transformed from a crude mockery of the human form, to the VEHICLE OF THE FUTURE!

And it’s crap, basically. Even if you can swallow the idea that our descendants will be driving around in lumps of cheese-scented corn matter, the wheels are so misshapen that they keep falling off. Is that really where the British manufacturing base is headed?

(…actually, yeah, it probably is.) 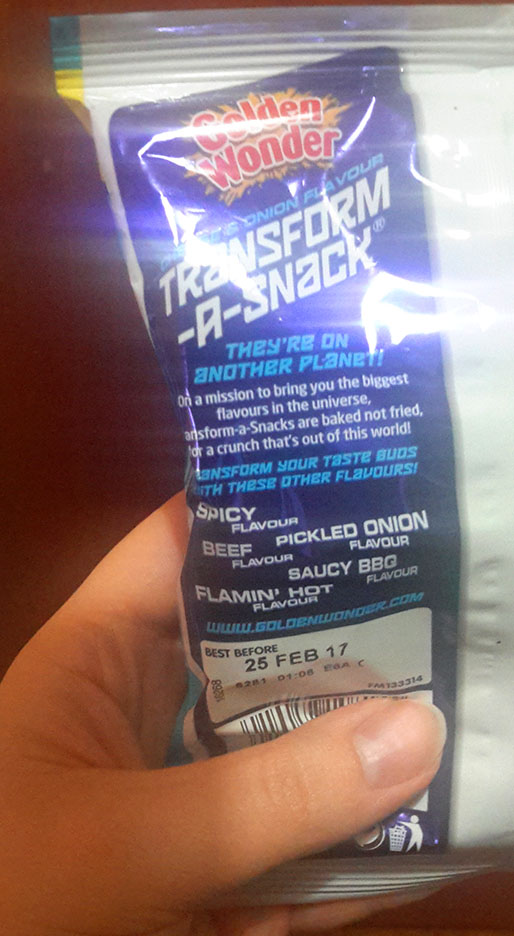 “They’re on another planet”, proclaims the packet. We are also informed that these Cybertronian vegetable men are “on a mission to bring you the biggest flavours in the universe”. Most of which were cribbed from Monster Munch.

VERDICT: Rubbish idea, rubbish execution. But I kind of wouldn’t mind seeing a cheesy 80s cartoon based on the concept, to be honest.