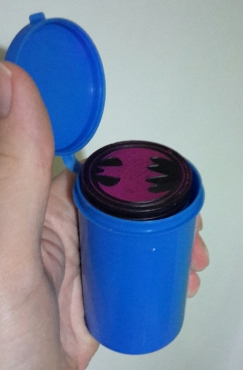 While looking around a charity shop on Sunday, I came across a small, blue, lidded tube for sale. Curiosity demanded that I look inside, and I was confronted by the sight of a magenta Bat Signal.

I immediately recognised the purpose of this small colourful plastic disc: it was intended to be thrown at stacks of small colourful cardboard discs. I had found a tube of Pogs!

Taking their name from a brand of Hawaiian passion fruit/orange/guava juice drink, Pogs started out as collectable bottle tops; at the height of their popularity it became feasible for the bottle tops to be – perversity itself – sold without bottles. And so the craze reached my windswept homeland of England, a world away from exotic Hawaii; while children such as myself had never heard of the Pog beverage, we eagerly collected the cardboard circles named in its honour.

The Pog craze, which peaked in 1995, was short-lived and appears to have spawned little nostalgia amongst grown-up 90s kids. But I still feel quite fond of the whole thing; perhaps this is because, out of all collectable toy fads, Pogs may have been the most democratic. Any manufacturer could make a Pog: even if they had to label it a “Slammer Whammer” or “Tazo”, we all knew it was a Pog. Even the kids could make their own Pogs, so long as they were able to afford a Milkcap Maker from Toys ‘R’ Us. (Home-made Pogs could theoretically be produced without such an appliance, but it was surprisingly tricky to get the shape and thickness right. I know this from bitter experience.)

I recognised a good number of the enclosed Pogs from my own childhood. The ones above depict a hairy character who started life as the mascot of the original Pog drink back in (I believe) the 1970s, when he was dubbed the Poglodyte. Presumably on the basis that this pun would go over kids’ heads, his redesigned 1990s incarnation went under the name Pogman.

I remember this guy getting flack for being a Taz knock-off back in the day, but that wasn’t really fair. If you take the 70s Poglodyte and give him a less fluffy, less cutesy makeover for the Ren & Stimpy generation, then it’s more or less inevitable that the end result will come out looking a bit like Taz.

Plus, he has some definite Captain Caveman DNA in there, too…

The licensed tie-ins offer a pretty good cross-section of what kids were into circa 1995. Some of these could have had a little more effort put into them, it has to be said: had I not looked at the back, I’d never have guessed that the drawing of a generic plastic soldier was meant to represent a Toy Story character.

In the top right corner can be seen a Pog that consists entirely of a catch phrase from Animaniacs, written in overdesigned text alongside pastel-coloured shapes on a white background. Pure, concentrated nineties. My close proximity to its unfiltered radiation caused me to don a backwards baseball cap and support New Labour.

I’m enough of a child deep down that I was excited to find Universal horror Slammer Whammers, and disappointed that there were only three. The Gill Man appears to have noticed something wrong with his Whammer.

Gimmick caps! As well as a glow-in-the-dark Slammer Whammer we find a Bugs Bunny Tazo, complete with little ridges around the edge. The idea was that you could slot the Tazos together to make structures, but this never caught on and they eventually adopted the more conventional Pog shape.

Incidentally, Tazos were given away with Walkers Crisps, something which appears to have allowed them to survive the end of the fad by a good few years. They lasted long enough for there to have been Pokémon Tazos – Gold and Silver, no less! 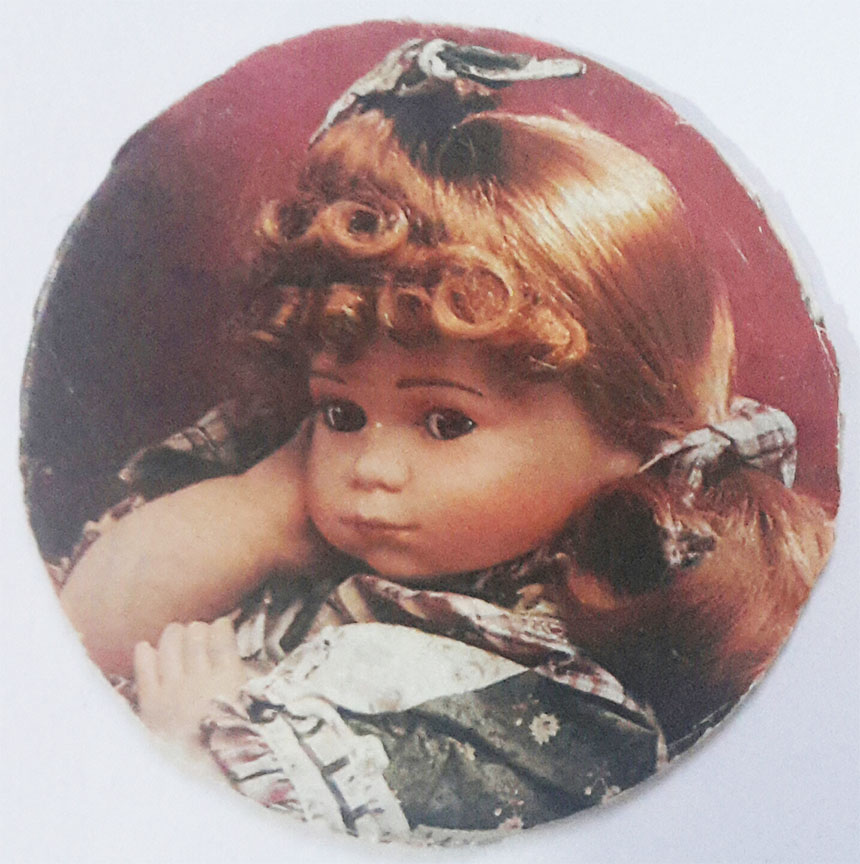 Now this one baffled me at first. It’s just… a photo of a doll. After finding the Universal monster caps I did wonder if this was from some kind of Child’s Play-esque horror film, but then I turned it around:

Aha. Milkcap Maker. This is a home-made Pog, folks. And it was not the only one in the tube:

Looking at these made me feel strangely voyeuristic. I was glimpsing the childhood of a complete stranger. Judging by the subject matter, a little girl somewhere felt that her fluffy tastes were not adequately catered to by the various Pog manufacturers, and so made her own caps using catalogue photographs of porcelain dolls and collectable resin teddies.

It was true. I had absorbed someone else’s childhood through second-hand Pogs.