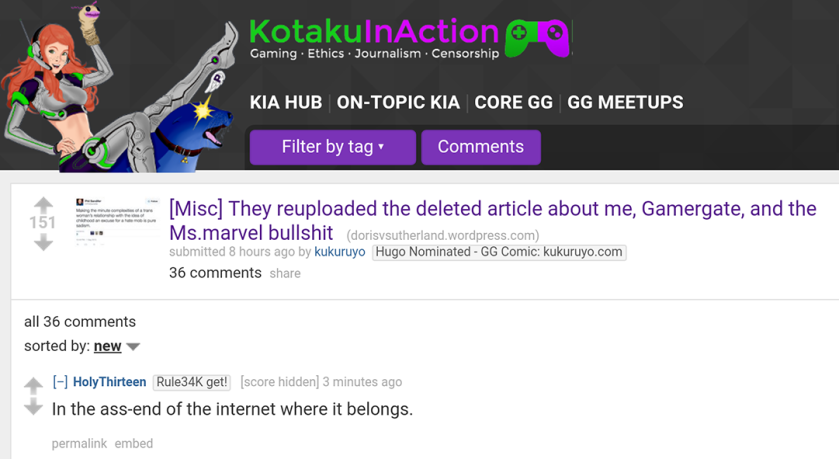 You know, if you’re going to join a campaign for journalistic reform, then it would help if you were able to actually read a blog post before passing judgment. But alas, it appears that a good chunk of Gamergate fails to meet this rather low bar.

KotakuInAction recently had a thread about my post Dirty Fanart and Teenage Edgelords. Now, I expected that post to go down poorly with Gamergate, given that it was critical of their campaign. What I didn’t predict was just how bewilderingly off-mark their response would be.

My post was inspired by Phil Sandifer’s condemnation of a nude Ms. Marvel picture, drawn by Gamergate cartoonist and Hugo nominee Kukuruyo, as “child pornography”. The general point I made was that, while I personally found the Ms. Marvel drawing objectionable, I saw no reason for it to be criminalised. I also made it clear that, at the end of the day, I found the past behaviour of Sarah Nyberg (whom Sandifer supports) to be more disturbing than anything drawn by Kukuruyo.

The KiA thread, meanwhile, appears to have arrived from a parallel universe in which I stated damn near the exact opposite: that I consider Kukuruyo to be just as bad as Sarah Nyberg. 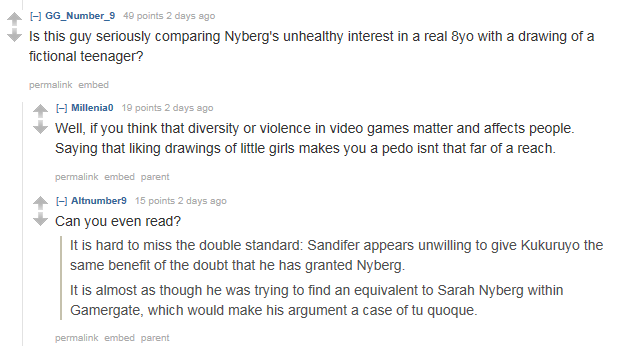 I’m not entirely sure if “this guy” refers to me or to Phil Sandifer. If it’s me, then yes, I did compare the two – and I came to the obvious conclusion that Nyberg’s behaviour was more objectionable. Incidentally, Altnumber9 is the only person in the thread to point out that my post was being misrepresented.

For context to the above two posts, here is the passage where I mentioned Gamergate’s role in drafting Encyclopedia Dramatica’s article about Sarah Nyberg:

In 2014 Nyberg established herself as one of the more dedicated opponents of Gamergate on Twitter. Her opposition to the campaign quickly earned her a hit-piece at the troll wiki Encyclopedia Dramatica – which, while not strictly speaking a pro-Gamergate website, is frequently used as a tool by Gamergaters. Evidence indicates that the first draft of the Encyclopedia Dramatica article on Sarah Nyberg was compiled at a Gamergate forum.

Well, I provided evidence to back up my claim, and KotakuInAction did nothing to refute that evidence. My point still stands.

(And for what it’s worth, my stats show that only one person followed the first link, while the second received a marginally higher four clicks).

Given that I spent a chunk of the blog post talking about my memories of GameFAQs’ LUE circa 2003, it should go without saying that I am familiar with Rule 34. Apparently this person has failed to distinguish between “this is the way people behave on the Internet” and “this is the decent way to behave on the Internet” (and that’s leaving aside the fact that I expressed my dislike of the Ms. Marvel drawing in two offhand comments made while defending Kukuryo’s legal right to draw such artwork…)

The first poster above (and possibly the second, I’m not quite sure what they’re trying to say) objected to the fact that the KiA thread linked directly to my post, as opposed to an Archive.is copy, and thereby gave clicks to a “dog” such as myself. Because, yeah, I really stand to gain a lot from a few Redditors clicking through to my free-hosted WordPress blog.

This person doesn’t seem to grasp that “much worse”, in this context, refers to something that I personally consider to be much worse. I do not share the described belief that Gamergaters are worse than Nazis, which must surely be a fringe opinion.

Here we have someone who openly admits that they didn’t read my post – although they at least did so in a fairly witty manner, I suppose.

Meanwhile, this poor devil’s mind appears to have been broken by the prospect of reading a blog post. 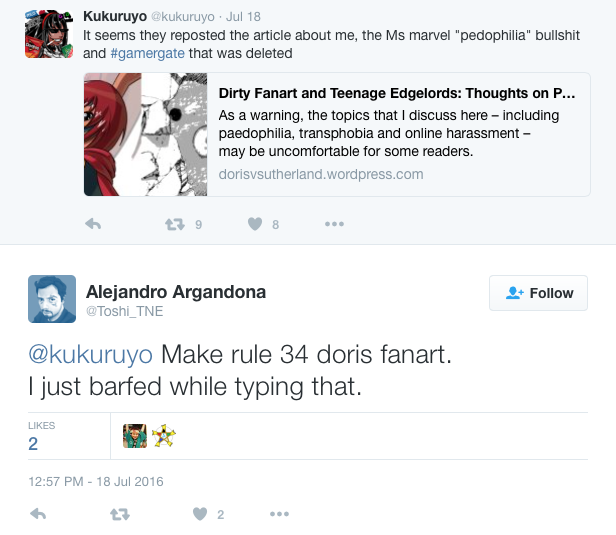 That would be a pretty uncharitable response to a blog post which (for the most part) defended him, but hey ¯\_(ツ)_/¯

The irony, of course, is that I concluded my post by arguing that Gamergate (amongst others) were muddying a potentially valuable discussion. This KotakuInAction thread has done nothing but reinforce my impression.