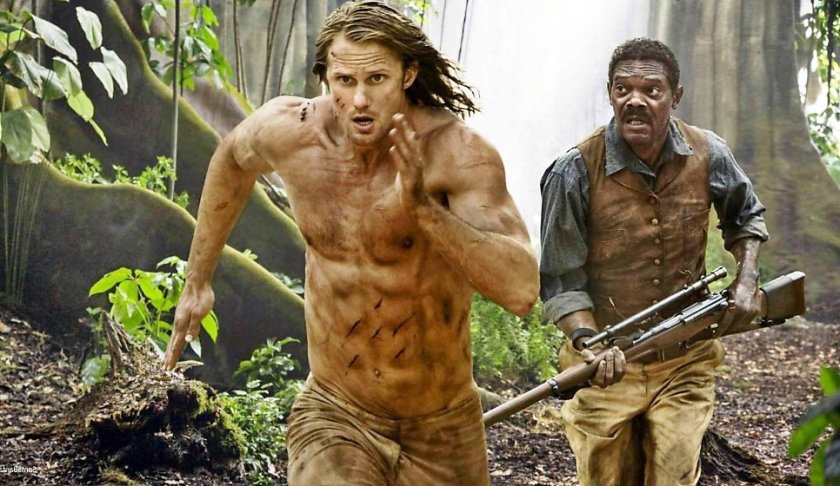 I went to see The Legend of Tarzan expecting to spend a couple of hours with an unabashed pulpy romp. That is pretty much what I got, although I was pleased to find that the film also showed a quite thoughtful approach to its source material.

The early scenes of the film resemble a loose adaptation of the second Tarzan novel, The Return of Tarzan: our hero is now living in London as Lord Greystoke, and Opar is mentioned as a background detail. However, these Burroughs-derived elements sit alongside a new plot thread involving the very real atrocities committed by King Leopold II in the Belgian Congo; a few historical figures turn up alongside characters from the books, including George Washington Williams ans Léon Rom. As the story develops it is this thread that becomes the thickest, with Tarzan helping to free slaves while battling the forces of Belgium.

The film offers a set of broad but entertaining characters. Margot Robbie’s Jane is a damsel in distress of the feisty variety, typified by Lois Lane or Indiana Jones’ flame Marion; she even gets to carry out a rescue scene of her own. Christoph Waltz’ Léon Rom is a moustache-twirling villain cut from the same cloth as Disney’s William Cecil Clayton. Samuel L. Jackson’s George Washington Williams is a wisecracking sharpshooter who brings firepower to the action scenes.

There is one weak link, sad to say, and it is Tarzan himself, played by Alexander Skarsgård. I will not point fingers are actor, director or writers, but it is clear that something went missing somewhere along the line. The Lord of the Jungle too often blends into the scenery, becoming a romance novel cover illustration while the supporting cast takes centre stage. Casting the infintiely watchable Samuel L. Jackson as his co-star seems particularly unkind!

The Legend of Tarzan replaces the fictional Waziri tribe, who were Tarzan’s friends in the books, with the Congolese natives. However, the tribe of Chief Mbonga – antagonists of the first novel – turn up when the story reaches Opar. The film does a good job of revising the book’s portrayal of Mbongo’s clan as savage cannibals.

Mbonga, played by Djimon Hounsou, is initially introduced as a secondary antagonist whose grudge against Tarzan leads him to collaborate with Rom. We later learn that Tarzan killed Mbonga’s son – who, in turn, had killed Tarzan’s adopted mother, believing the ape to have been a mere gorilla and not an intelligent “Mangani”.

As well as humanising Mbonga, this part of the story taps into the brutal aspects of the Tarzan character. Although later interpretations depicted him as a benevolent, Superman-like figure – culminating in the Disney incarnation, who was so committed to pacifism that he was allowed to kill his enemies only by accident – the hero of Edgar Rice Burroughs’ original Tarzan of the Apes started out as a being of animalistic violence. Casually killing theh unter who slew his ape-mother was entirely in-character for the young Tarzan of Burroughs; only later in the novel did he move away from the law of the jungle and learn human qualities such as mercy and forgiveness. As this latest cinematic Tarzan proclaims after his confrontation with Mbonga, “I had no honour.”

It is a pity that the film does not explore this element of Tarzan’s character further. After all, comparatively few people are familiar with the Burroughs stories these days, and most will know the character from either the Disney cartoon or a vague, pop-cultural race memory of the older live-action films. The Legend of Tarzan is curious in that it is written as a loose sequel to the original Burroughs book, in the apparent assumption that the audience will be familiar with the character arc undertaken by Tarzan in that story. I imagine that Burroughs fans will get more out of the film than moviegoers previously unacquainted with the ape-man.

The film has received criticism for working the historical atrocities of colonial Belgium into its two-fisted pulp storyline – but then, in doing so, it is working within the conventions of popular fiction. After all, just think of how many action movies have used Nazis as villains, and how many horror stories have incorporated Jack the Ripper.

I went to see The Legend of Tarzan with a friend from Ethiopia, who seemed to enjoy it even more than I did. She told me that she found the film’s portrayal of the Congo to be both convincing and positive. When we discussed the “white saviour” trope, she concluded that the film’s Tarzan – as a figure who straddles Europe and Africa – was a symbol of the brotherhood of man, rather than of white supremacy.

The film does show sensitivity regarding the often uncomfortable racial implications of the Tarzan mythos. In particular, it makes a clear effort to show its hero receiving vital aid from both Congolese warriors and the Samuel L. Jackson character – who, in his role as diplomat, offers the final coup de grace to the colonial villains. This does, perhaps, add to the storytelling problem of Tarzan’s character failing to stand out as much as he should, but it is at least well-intentioned.

The Legend of Tarzan has its flaws, but I found it to be a successful attempt to update the character while respecting his roots. Definitely recommended to Burroguhs fans who do not mind a little artistic license in their adaptations.